The Oregon Department of Transportation (ODOT) is currently undertaking several large scale road and bridge improvement projects. The Highway 238-to-Jackson Street project is just one portion of a collection of projects totaling $135 million dollars. According to ODOT, the Highway 238 project is the largest construction project in Jackson County, OR in more than a decade.

Ten years ago such a project may not have included the use of trenchless technology, specifically pneumatic pipe ramming. Today the story is different and contractors like Northwest Boring Company, Inc., Woodinville, WA are pushing the limits of trenchless methods and equipment. Northwest Boring Company is a pioneer in the trenchless construction industry on the West Coast. Its roots go back to the first auger boring project completed in central California in 1951.

For the installation of an 80-inch storm sewer casing underneath Highway 99 in Medford, OR Northwest Boring President Don Gonzales drew on years of experience to create an optimal project design and enlisted the help of the world’s largest pipe rammer, the Grundoram Taurus from TT Technologies, Aurora IL.

Gonzales said, “We worked directly with the owner of the project and [general contractor] Hamilton Construction [Springfield, OR] to create a successful project. Several proposals were considered before the project was finalized. In the end we came up with a very solid project that also reduced costs to the owner.” 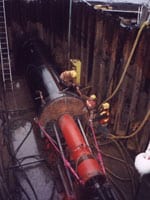 With a casing of 80 inches, the180-foot ram in Medford, OR was one of the longest large-diameter pipe rams ever attempted.

Like many states throughout the country, Oregon is working to maintain an aging, and in many cases under capacitated, road and bridge infrastructure. In order to increase traffic flow and improve connectivity in the North Medford area, ODOT has developed a massive highway reconfiguration project in an area known locally as the Big “Y”.

According to ODOT, the $18 million project includes everything from rehabilitating existing roadways and constructing new ones to installing storm drainage systems and traffic signals. Minimizing disruption in areas where old meets new can be challenging. Minimizing disruption while trying to install an 80-inch steel casing underneath a state highway is beyond challenging, unless the right contractor is paired with the right equipment.

Pipe ramming has been around nearly as long as piercing tools. Using a piercing tool to install a small-diameter casing in the ground is not a difficult task. The difficulty or challenge in pipe ramming comes with large-diameter casing installation and long distances. According to TT Technologies Pipe Ramming Specialist Mike Schwager pipe ramming is progressing into some of the largest diameters and lengths ever attempted.

He said, “I’ve worked on several large diameter ramming projects over the last few years. We are starting to see contractors, like Northwest Boring, push the technology to new levels. The tools to complete those types of projects are out there, but a lot of it has to do with the contractor. This project had everything, difficult soil, a large diameter casing and an extremely long bore length. This was easily one of the longest pipe rams of this diameter ever accomplished.” 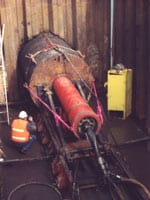 Permalok casing was chosen for the storm drain project. The casings are connected by a special joint system that does not require welding.

Permalok steel casings were chosen for the Medford project. Often during a ramming or a jack and bore project welding casing segments can take many hours of production time. Permalok casings employ a mechanical press fit design that provides a strong, quick connection between casings as an alternative to welding.

Gonzales said, “The physical impact from pipe ramming, especially large diameter ramming, on a casing is immense. I have never had a Permalok joint fail. We chose Permalok for two reasons. One was the production time saved from not having to weld. And two was the success rate. If we’re going to put the world’s biggest and most powerful pipe rammer, the Taurus, on pipe, I want Permalok.”

After finalizing the scope of the project, the Hamilton Construction crew set to work on preparing the job site for what would be one of the world’s longest, large-diameter pipe rams ever attempted. The launch pit was excavated and constructed using driven sheet pilings for added safety.

The crew poured a concrete platform and used auger boring tracks as a drive platform. Hydraulic jacking cylinders were also used in conjunction with the pipe rammer to help eliminate rebound by adding a constant pushing force. A yoke frame was constructed to help transfer the force evenly.

Gonzales said, “Hamilton was a great general contractor to work with. The pit they constructed for us was a work of art.”

After the track and driving platform were assembled, the Northwest crew began work on the cutting shoe for pipe ramming operations. According to Schwager, the cutting shoe is an integral part of the pipe ramming process. He said, “The cutting shoe helps strengthen the tip of the leading pipe for maximum penetration through difficult soil and rocks. It also reduces both external and internal pipe friction due to its oversize cut.”

Difficult soil conditions were going to make the project anything but easy, but ramming helped overcome the conditions. Some casing installation methods are impaired or even rendered inoperable by rock or boulder filled soils. Pipe ramming is different. During pipe ramming, boulders and rocks as large as the casing itself can be “swallowed up” as the casing moves through the soil and can be removed after the installation is complete. The Northwest Boring crew encountered some big rocks during this ram but was able to get past them without incident.

The soil conditions also made bentonite lubrication an essential part of the project. The Northwest crew installed a bentonite line along the top edge of the lead casing. In this case, the cutting shoe created a channel for the flow of the bentonite/polymer mixture. Several thousand gallons were used during the project. 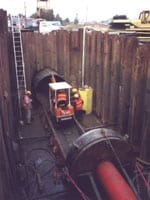 After each 20-foot casing section was rammed in place, the Northwest Boring crew would remove 8 to 10 feet of spoil with a mini excavator.

In order to connect the 24-inch diameter Grundoram Taurus ramming tool with the 80-inch Permalok casing, a series of tapered cones were used. The configuration for the Medford ram included two tapered ram cones.

A special push ring was used with the Permalok casing so that the actual ramming force was transferred to the casing itself rather than the pipe’s connection joints. The first 80-inch ram cone reduced the overall diameter from 80 inches to approximately 36 inches. The next cone further reduced the over all diameter to the point where the tool is connected, friction fit, to the cone thereby completing the assembly.

After the final tool assembly, ramming began at a furious pace with the first 20-foot section taking approximately 30 minutes to ram in place. The next section of pipe was lowered into position the same day and partially rammed in place. Operations halted briefly after an abandoned water line was encountered in the bore path. Once removed, ramming continued. The Northwest Boring crew checked line and grade measurements periodically and removed 8 to 10 feet of spoil with a mini-excavator after each pipe section was installed.

Ramming times ranged between 30 and 40 minutes up to 140 feet. As expected, ramming times increased during the final sections of pipe. After the final 20-foot section of pipe was installed, the Northwest crew removed the spoil using a 48-inch auger boring machine. The new 80-inch storm sewer was in place, on line and grade, at the amazing distance of 180 total feet, 80 x 180.

According to Gonzales, everyone was pleased with the results of the project. Gonzales said, “Creating a viable ramming project was key to the success of the job. Once that was accomplished, the [on-site] preparation and planning were excellent. When the pipe rammer arrived on site we were ready to put it to work. We had to make a couple of adjustments to grade at the beginning of the job, but after that the pipe stayed right on grade. In fact the line was perfect and the grade was within a mere 0.16 inches of design. That’s a remarkable accomplishment.”

Innovative Ramming: Genseed Rams I-Beams Instead of Pipe in England

Large Diameter Ram: Miller The Driller Does It Again
Scroll to top