When ramming large-diameter pipe along railroad lines, underground construction crews face several challenges, including maintaining the grade of the bore and minimizing settlement of the tracks. Sometimes, just getting to the jobsite can be a challenge. Angelica Boring Company, a NUCA-member contractor based in Pittsford, N.Y., recently overcame these challenges on a pipe ramming job in the state’s Catskill Mountains.

Angelica Boring Company’s crews do final prep work on the first section of casing, using an auger track as a drive platform and a jacking cylinder system to keep constant pressure on the casing and eliminate reboud.

The stretch of Conrail line, 2 miles east of Chester, N.Y., intersects a creek system that produces heavy runoff during the spring melt and heavy rainfalls. Existing culverts under the tracks could not handle the water flow. Backup from the creek was damaging surrounding areas and threatening the tracks.

The first major hurdle Angelica faced was getting the necessary equipment to the jobsite, as no roads lead directly to that section of track. “The ram took place at the bottom of the ravine, alongside the creek,” Schwager said. “They [Angelica] basically built a road to the site.” 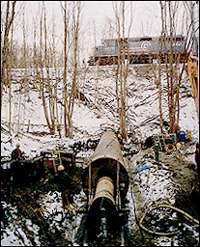 For this tough job, the company chose the Grundocrack Taurus to ram 145 ft. of 72-in. steel casing under the Conrail line.

The Angelica crew used a 24-in.-dia., 10,580-lb. Taurus Grundoram pneumatic pipe rammer for the job. The crew laid approximately 100 ft. of auger track as a drive platform for the Grundoram. A jacking cylinder frame supported the pipe rammer and eliminated rebound, which was crucial to reducing track settlement.

“The jacking cylinders help keep the tool from rebounding backwards as the ram is taking place,” Cartwright said. “We put a preset amount of pressure on the tool and casing, allowing the pipe to move forward but not backward. We put the rammer on the track in a special saddle. Then we put 8- by 8-in. hardwood blocks between the front of the sled and the tapered ram cone. We were able to exert about 300,000 lbs. of pressure on the casing before ramming.”

After a few days of prep work, the Angelica crew began ramming. Workers welded together two 40-ft. sections of 72-in.-dia. Grade B steel casing and used two tapered, locking ram cones (a 72-in. and a 30-in.) to connect the casing to the Grundoram.

As the casing and tool moved forward, the Angelica crew stopped periodically and reset the jacking cylinders to maintain pressure. The casing was placed in just 2 1/2 hours. The crew used an auger to clean spoil from the casing and began prep work for the next section.

After cleaning the spoil, the crew moved the final 65-ft. section of casing in place. Workers took only a few hours to complete the weld that connected the sections. The crew once again fit the Taurus with tapered ram cones and commenced ramming. Just 3 hours later, the entire 145-ft. casing was in place under the rail line.

“Angelica’s teaming of the Grundoram with an auger jacking system proved extremely effective,” Schwager said. “Everyone was very happy with the results of the project.”

Pipe Bursting And PG&E: The Toolbox Gets Bigger
Scroll to top