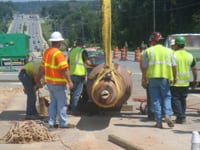 Portland Utilities Construction Company (PUCC), Portland, Tenn., is one of the most experienced pipe bursting contractors in the United States. They have completed 600,000 liner feet of pipe bursting, 30,000 feet of that in the 18-inch diameter and greater range. With over a decade of bursting experience, the family owned company continues to set the bar for pipe bursting projects in the North America. The force main project in Tallahassee, Fla., was no exception.

Following tropical storm Fay in 2008, the city’s 36-inch fiberglass resin force main, originally installed in 1985, failed in three places after 14-inches of rain fell within a 24-hour period. The three breaks occurred within a two mile section of the fiberglass resin force main that runs beneath the Capital Circle Roadway, a Florida Department of Transportation (FDOT) roadway that is one of the most heavily traveled in Tallahassee.

The city approached multifaceted engineering and design firm MWH, Atlanta, Ga., in March 2009 to assist in the development of a feasible trenchless rehab and replacement project for the force main failure. The question at hand was whether or not a pipe bursting technique could be utilized to replace the pipe in order to preserve its carrying capacity. MWH proposed a pilot project to prove the bursting technique to the city of Tallahassee, as well as the Florida DOT. This idea was adopted and performed in August 2009. 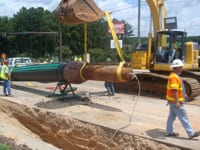 Pipe bursting was selected as the principal trenchless replacement method to expedite construction, minimize disruption to the existing roadway, and maximize the internal diameter of the renewed pipe.

Pipe bursting was selected as the principal trenchless replacement method to expedite construction, minimize disruption to the existing roadway, and maximize the internal diameter of the renewed pipe. Because this type of fiberglass resin pipe had not previously been pipe burst and to alleviate concerns regarding road heave, a pilot project was proposed.

PUCC was chosen to perform the bursting work. For the job, a pneumatic pipe bursting system from trenchless equipment manufacturer TT Technologies, Aurora, Ill., was chosen. 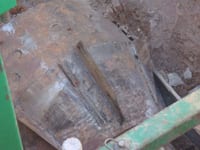 For the pilot project, a 280 linear foot segment at the southern end of the pipe was selected. It was estimated that typical pipe bursting lengths for the 36-inch diameter pipe would be in the range of 200 to 400 feet, so 280 feet was used as a pilot length to confirm that those lengths were feasible. The location was chosen because it best represented typical conditions of the project in total. Also, of any portion on the project the chosen section had minimal amount of cover, making it a worst case scenario. So, with road heave being a concern, if the bursting went smoothly here, it was assumed that heave would not be a concern in other areas.

A problem was encountered right at the start of the pilot project. Excavation of the bursting head revealed that the 36-inch DIPS expander’s 1-inch cutting blades were too small to cut through the host pipe’s couplings. Crews welded three larger 3-inch cutting blades to the expander at 10, 12 and 2 o’clock positions. Following this adjustment, the pilot continued successfully until completed with no evidence of road heave.

The burst was completed in 90 minutes at an average bursting rate of three feet per minute. All parties were pleased with the successful outcome of pilot and it was determined that the remaining length of project would be completed through pneumatic pipe bursting.

Despite the attention that static pipe bursting has receive in recent years, pneumatic pipe bursting continues to be a workhorse option for trenchless pipe replacement. And, in this case, it proved to be a significantly capable option considering the challenging nature of the project. For the Tallahassee project, the pneumatic system was chosen because of the impact force the method provides and because the method was successfully employed for bursting a similar type of pipe in California.

During pneumatic pipe bursting, the pipe bursting tool is guided through a fracturable host pipe by a constant tension winch. As the tool travels through the pipe its percussive action effectively breaks apart the old pipe and displaces the fragments into the surrounding soil. Depending on the specific situation, the tool is equipped with an expander that displaces the host pipe fragments and makes room for the new pipe. As the tool makes its way through the host pipe, it simultaneously pulls in the new pipe, usually HDPE.

With the use of expanders, one tool can be used to burst several different size host pipes and replace them with new HDPE of the same size or larger. The rear expander configuration provides several key advantages. One of which is it allows the use of bentonite in conditions that warrant.

Tool and expander selection is affected by various factors including host pipe type, depth and profile, jobsite layout, burst length, soil conditions and more. Upsizing is also a major consideration in tool expander selection. Some extremely large upsizes in the 120-125 percent range have been successfully completed through bursting. These bursts are typically categorized as experimental, although quite a few have been completed successfully. The 25-50 percent upsize is much more common, but is still challenging. Upsizes between zero and 25 percent are considered common. 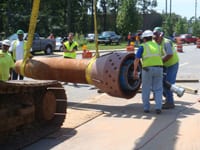 For the burst, a 24-inch diameter Grundocrack Taurus pneumatic pipe bursting tool with a 20-ton constant tension Grundowinch was used.

Finally the winch system is very integral to the pneumatic pipe bursting process. The winch needs to provide constant tension at variable speeds. That is especially important for projects with point repairs or in the case of the Tallahassee project pipe couplings. When the bursting tool reaches a repair it slows down as it works its way through. After the repair is burst, there is less resistance and the tool speeds up quickly. The constant-tension, dual-capstan, twin-motor winch will compensate for this change in speed and prevent slack from developing in the line.

For the pilot burst and ultimately the entire project a 24-inch diameter Grundocrack Taurus pneumatic pipe bursting tool with a 20-ton constant tension Grundowinch was used. A Grundomudd bentonite mixing and delivery system provided lubrication for the bursting process. 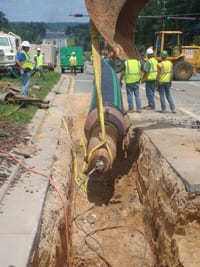 With everyone pleased at the result of the pilot project, the remaining project was given the green light. The project was divided into three sections, two sections of pipe bursting, 1,750 feet and 5,005 feet, as well as 930 feet of direct bury. The force main was located in the vicinity of the median of Capital Circle, a six-lane highway. Limited lengths of the force main edged out in to the outer lanes of the Northbound and Southbound carriageways from the median.

Launch and exit pits were strategically positioned at existing plug valves, existing air release valves, the ends of existing steel casings, connections to DIP separating work packages, and every 300 to 400 feet otherwise. PUCC was required to adjust the number and location of the pipe bursting pits to minimize the number of pits required, based on the maximum length of bursting that could be achieved. Pits averaged 20 feet long by 10 feet wide.

Portland Utilities’ crews overcame numerous challenges throughout the completion of the project. Bursting down the center of one of the busiest roads in Tallahassee made safety and traffic management top priorities. The size and weight of the equipment and pipe also added a level of complexity to the project. Because of its size the pipe was difficult to stage and move. With bursting lengths up to 484 linear feet, the fused sections of ASTM 4710 36-inch HDPE pipe weighed in at just under 68 tons.

The main pipe bursting operation began in November 2009 and was completed in February 2010. Crews worked five days a week, 24 hours per day with the exception of a two-week mandatory shut down period between Christmas and New Years.