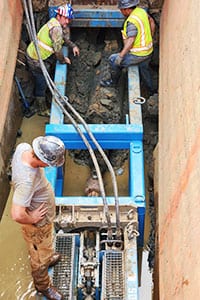 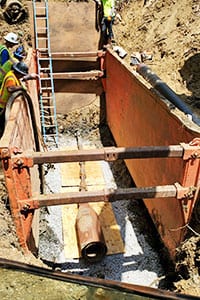 At the very core of trenchless technology is the idea that subsurface pipes and utilities can be replaced, rehabilitated or installed without having to dig…much, and sometimes not at all. Sometimes that means trenchless technology lives in the spotlight and carries all the weight of success or failure on a job. This is never truer than in a situation where no “digging” can occur and project success is thoroughly planted on the shoulders of skilled contractors and their assessment of what can be accomplished.

Randy Higginbotham owner of H&H Site Specialty LLC, of Atlanta, GA was recently in the role of that contractor for a significant pipe bursting project that took place under I-675 in Clayton County Georgia. Higginbotham has been involved in some of the largest, most impressive and publicized pipe bursting programs and projects ever attempted, from Houston, TX to Jacksonville, FLA to Atlanta, GA. And after decades in the industry, he started H&H Site Specialty two years ago with his son Josh. With a reputation for quality and ability, H&H Site Specialty was the ideal choice to facilitate the I-675 pipe burst.

Higginbotham said, “The project came to us through RDJE, Inc, out of Newman, GA, one of the best contractors I know. A large portion of the project was being completed by an open cut contractor. When they came to this section under the interstate, they called RDJE because they do pipe bursting. It was really one of the most challenging projects we’ve seen in quite some time. They reviewed it and called me in to review it as well to see if we would be able to take it on. We don’t run away from stuff. Joe Webb called me and said, ‘Randy, can you do it?’”

Webb, Vice President of Utility Rehab at RDJE, said, “We were contracted to do the burst, but ended up not having the capacity to complete it within the given timeframe. Now it was a difficult project. We trust Randy and his company as if we were doing the job ourselves. It’s kind of like bragging about your own company. That’s how much respect we have for Randy and H&H. If someone is willing to take the risk and it’s a project that can be done, RDJE or H&H will make it happen. So Randy was the choice to handle this one.”

According to TT Technologies pipe bursting specialist Eddie Ward, static bursting was the right choice for the difficult ductile iron host pipe. He said, “Static pipe bursting is really becoming a ‘go to’ method when it comes to replacing pipe. Pneumatic bursting is still a work horse, but static is very versatile and the fact that you can install different pipe materials such as fusible PVC, ductile iron, HDPE, clay, etc., makes it very attractive.

“Plus, the fact that it can burst ductile iron and other difficult host pipes contributes to the fact that people want to use it on their projects. It helps in the design process, as well as the bidding process.” 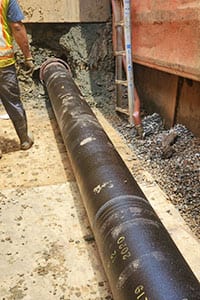 Static pipe bursting systems are able install a wide range of product pipe. For the burst under I-675, H&H Site Specialty burst the existing 8-inch ductile iron and replaced it with 12-inch ductile iron.

The project owner was the Clayton County Water Authority (CCWA), GA. According to its website, the CCWA provides a range of services including water, sewer, and storm waters to over 250,000 residents throughout Clayton County and its six cities including approximately 82,000 accounts. The CCWA also operates three water production facilities that together can treat up to 42 million gallons-per-day.

Higginbotham said, “They’re [CCWA] good people to work for. They’re all about getting the project done and working with the contractor. I have to give them a hand.”

With existing capacity issues and a major development coming to the area, the current 8-inch ductile iron trunk main needed to be upsized. But any project under an interstate where no digging is allowed poses some fairly significant challenges and risks.

Webb said, “We made it clear to the county prior that there was a chance that this project might not work because we could not see what type of material was surrounding that pipe. We expressed that concern so that everyone was on the same page. Ultimately the county did commit to tunneling in the event that the bursting project didn’t go as planned.”

While the fill material around the outside of the pipe was not known, ductile iron pipe, is an inherently difficult material to split or burst. However, it has become more common over the last 15 years. It takes the right type of equipment and equipment configuration. Ward said, “When it comes to tackling ductile iron, specially designed bladed rollers are important. The bladed rollers are pulled through the host pipe by a hydraulically powered bursting unit. As they are pulled through, they split the ductile pipe. An expander attached to the rollers forces the fragmented pipe into the surrounding soil while simultaneously pulling in the new pipe.

“The bursting rods are also critical to the success of any static pipe bursting project. Ward said, “Some stems get screwed together like drill stems would, Quicklock style rods link together forming a secure connection, while eliminating serious rod torque. It also helps when it comes time to install or breakdown the project. These rods can be quickly removed at the exit pit, while the bursting run is being completed.  That’s a big time saver.  Plus, you don’t have that potentially dangerous high torsion situation.”

Bursting Under the Interstate

The new 12-inch diameter TR Flex restrained joint ductile iron pipe segments were 20 feet long.  That type of segmented pipe can be installed through static bursting.  Ward explained, “Installing segmented pipe has been a major advantage of static pipe bursting.  Segmented pipe like ductile iron is fed into the bursting system one joint at a time, in what’s referred to as a cartridge loading process.

“Whether it’s restrained joint or non-restrained joint, each one requires a little different tooling when used in a static pipe bursting application.  For example, a sectional pipe with restrained joints needs a specific type of bursting head. That head connects to the product pipe and then to specially designed tooling. As the pipe string is pulled in, when its time, a section is dropped in place, the tooling is moved and reconnected, and the process continues.”

On the job, the bypass was set up by the general contractor before H&H Site Specialty arrived on site. It traveled through a system creek and under the interstate. In all, it took several weeks to set up. After the bypass was in place, H&H crews began bringing equipment to the site.

Higginbotham said, “Once the equipment was brought on site, we actually set everything up the same day we did the bursting. It doesn’t take our crew long to get set up and start pushing rods. That’s the good thing about that particular equipment, it’s easy to set up and take apart. I think we started on the 5th and on the 6th we pulled that pipe in.”

H&H had an 8-man crew compliment on the project. The ground conditions were rocky, but a lot of that was shot rock or rip-rap.  The existing line was approximately 20 feet deep, however, the launch and exit pits were only 10 feet deep, as the interstate was elevated and gave the crew good access on either side. As such, only 8-foot tall trench boxes were required, at a length of 24 feet each to accommodate the long segments of new ductile iron pipe. The existing trunk main was 8-inch ductile iron and was upsized to 12-inch ductile iron. But for the complete upsize, the OD of the expander on the bursting head was 19 inches.

Higginbotham said, “It took us an hour and thirty minutes. Once it was hooked up, it pulled right to us. Man, that pulled easy, with hydraulic pressure readings between 60 and 80 bar. At the end the of burst we ran into a section of extremely thick ductile iron that began to pull loose from the soil. At the point we were just about finished and extracted that last piece of old pipe. We were really pleased with the results.” 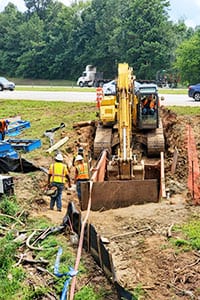 The existing trunk main was being upsized for capacity reasons. Bursting took approximately 1 hour and 30 minutes to complete.

The project marks another impressive burst for Higginbotham and H&H Site Specialty.  Higginbotham had nothing but praise for his crew. He said, “My son’s been with me 23 years through a bunch of different contractors on our way up. We’ve got over a million feet behind us. And now we’ve finally gone out on our own. But I’d put him and his group up against any contractor in the country. He really knows how to get things moving and get the job done. Those guys know every step, and that makes a good pipe bursting operation We always try to make sure wherever we work, that we’re always invited to come back.” 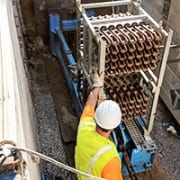 Penn Township Sewage Authority: Getting with the Program, The Pipe Bursting Program!

Fibre-to-the-Home Brings Compact HDD to the Neighborhood: Next Level Directional...

New Compact Directional Drill From TT Technologies on Display at the Utility...
Scroll to top