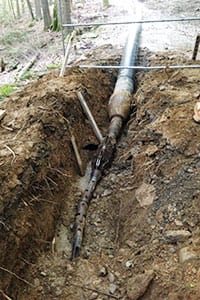 R.H. White, Auburn, Mass. recently tackled a particularly challenging water main replacement for the City of Westfield, Mass. The original pipe installed in 1898 along the Granville Gorge in Granville, MA. The pipe path was cut out of rock sidewall of gorge. The rugged terrain and difficult access would not allow open cut with large equipment. While initially thought that the pipe was placed in a solid rock trench, further investigation by R.H. White engineers revealed that the pipe was covered with loose fill material created when the pipe trench was dug.

The pipe was, at one time, used to carry water from a water reservoir in Granville to the city of Westfield, MA. Over the years, the pipe was eventually abandoned in favor of deep-water wells in the city of Westfield. Recently, the deep-water wells have proven to be too expensive and an effort to reestablish the water draw from the Granville reservoir is underway and this project is part of that effort.

Along the Granville Gorge 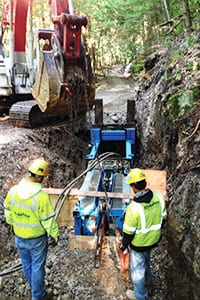 The replacement of the pipe had been discussed for several years and turned down by several entities previously. The determination that the pipe was only covered on loose fill material and not solid rock trench made pipe bursting a legitimate option for replacement. R.H. White engineers were the first to ascertain that the pipe was replaceable.

The existing pipe had sections of ductile iron repairs that the contractor decided to excavate instead of bursting. However, those excavated section served as bursting pits for bursting operations. Crews burst in both directions in those situations. Once the pit was established and bursting of the first run was in progress, crews would allow the locked bursting rods to pass through the machine and rod the second bursting run. This time saving method, accomplishes two tasks at once, contributing to productivity and efficiency.

Initial bursting runs ranged between 375 and 400 feet. However, the pressure against the carriage of the machine was minimal and the resistance needed to burst the pipe was low during operations, so the R.H. White crews decided to attempt longer bursting runs.

R.H. White crews decided to install bursting rods through the host pipe as far as they could until they were met with resistance. This was typically the point where the pipe bend was too significant to overcome. This accomplished two things. First, it identified where the bends were and where excavation was needed. And second, it typically created much longer runs, improving overall efficiency of the bursting process. The longest runs on the project reached lengths of almost 700 feet.

The entire project took approximately two months to complete and was finished well ahead of schedule.