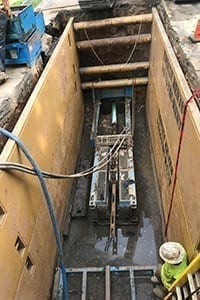 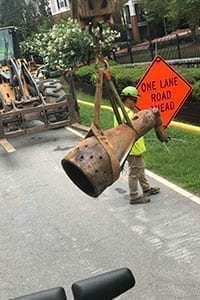 In 2018, the Cobb County Board of Commissioners moved to meet some of that increasing demand by approving an upgrade to the existing system. Dubbed the Pinetree-KSU Outfall Sewer Upgrade, the county-engineered project aimed to significantly increase the capacity of the system used by the university, as well as a local country club.  The project included replacing approximately 5,700 linear feet of 10-inch and 12-inch VCP with 16- and 18-inch HDPE.  Utility contractor RDJE, Inc. Newnan, GA., was awarded the bid.

RDJE Vice President of Utility Rehab Joe Webb said, “Around 2,200 linear feet of the 10-inch sewer on KSU’s campus was slated to be upsized to 16 inches through pipe bursting.  That method was specified in order to avoid extensive trenching on Campus Loop Road. The remaining 2,500 feet of new 16-inch and 18-inch mains were installed by the open-cut.  Most of that was outfall, located in the woods near campus.  Old and shallow pipe, you could actually see the pipe coming out of the ground. They wanted to place the pipe deeper in the ground and that’s why we open cut that section.”

Top of the Class: RDJE, Inc. 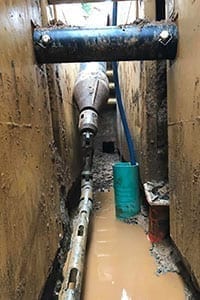 RDJE performs both pneumatic and static pipe bursting and has for about 10 years now.  After the great recession of the late 2000s, the company decided to expand its service offers and incorporated pipe bursting.

RDJE Project Manager Trey Russell said, “When it comes to selecting which method to use, it really depends on the actual job.  What’s the upzise? What type of material are you bursting? What’s the location like?  There’s a list of criteria we use to evaluate which  pipe bursting method is best suited for a particular project.”

According to Ward, static pipe bursting has some attractive capabilities.  He said, “The evolution of static pipe bursting is really remarkable.  The method came in on the heels of pneumatic bursting which, when you tally up all the pneumatic projects, is still probably responsible for a majority of pipe bursting in North America.  But the static process has really gained popularity over the last decade or so.  It’s such a versatile process.

“That versatility originates in two main areas.  First is the method’s ability to burst and replace a wide range of host pipes and diameters.  The second is in its ability to install any number of new product pipes.  Pipe material can sometimes be a point of contention.  Certain pipe rehabilitation and replacement methods are limited to the type of material they can utilize.  Many utilities or municipalities are very invested in a certain pipe material.  Sometimes that makes it almost impossible for them to consider other piping materials. With static pipe bursting, however, you can install a wide range pipe materials including fusion welded, restrained joint, non-restrained joint and sectional pipes.  So really, you have a highly versatile system that can meet almost any demand for pipe material.”

According to Russell, RDJE purposely waited until the summer months to perform the portion of the project located on the KSU campus.  That gave them from late May until August to finish the work. The campus project was divided into 900- and 1,300-foot long bursting runs, with one 900-foot section of open cut in between them.

The 900-foot section of open cut was designed that way because of existing utilities and culverts.  That section included a high profile fiber line, a gas main, an existing sewer line and a water line.  Crews needed to safely work around those utilities in order to place the new section of sewer main. According to Russell, the area had extremely poor soil and RDJE crews removed and disposed of any spoil offsite.  They replaced and refilled excavated areas with graded aggregate base (GAB). 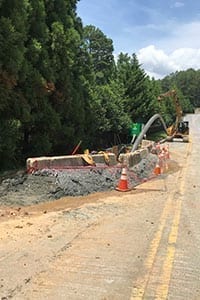 The bypass for the project was rather challenging because the amount of flow and the layout of the project.  During the several weeks of preparation leading up to pipe bursting, the RDJE team employed very creative bypass routes.

With a lot of flow in several areas, each day RDJE spent a significant amount of time setting up bypass pumps.  There was no 24-hour bypass established during preparation for bursting, so each day crews would reset pumps.

Russell said, “We kind of had to leap frog for the bypass.  We couldn’t bypass the entire area at once, so we bypassed from one manhole to the next, for however many feet we needed until we could discharge into a line that was open and usable.  Some of the service laterals were servicing the dorms.  Even though school was out, there was still fairly significant flow from the dorms.”  When it was time to begin actual pipe bursting, RDJE kept a crew person on site 24 hours a day to monitor the bypass so that bursting could begin process first thing in the morning.

The launch pits for the project were fairly long because of the overall depth of the existing main.  Russell said, “On the end of the 1,300-foot run, the utilities were a nightmare and the pit was about 60 feet long because we had to thread the new pipe through all of them.  On the 900-foot run the launch pit was about 40 feet long because of the extreme depth, over 25 feet at that point.  Fortunately, ground water wasn’t an issue even with the depth.  Pull pits were not quite as deep.  Those were between 12 to 14 feet deep, 30 feet long and 10 feet wide.” 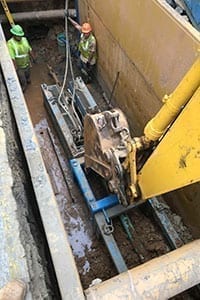 Bursting started at the end of Campus Loop Road with the 900-foot bursting run first. The hydraulic bursting unit was positioned in the pull pit and the existing 10-inch line was rodded with QuickLock bursting rods.  Once rodded, crews attached the rods to the expander and fused pipe string, a 21-inch expander was used to facilitate the significant pipe upsize.  For this run, crews fused and staged all of 900 feet of HDPE needed. The burst was completed in a single two days.

For the second section of bursting, crews stage about half of the 1,300 feet of pipe. After moving the bursting unit and rodding the host pipe, that section of bursting went equally well, with the 1,3000-foot pull taking two days.  The entire project was completed with a week to spare before school started again, including all the restoration work.

Ward said, “RDJE did a great job with this burst.  The upsize was impressive.  There’s a lot that goes into completing a pipe bursting project of this scope and the [RDJE] crew on this project was efficient and effective from start to finish.  Nice project.” 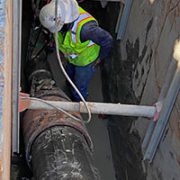 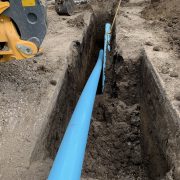 Trenchless to the Core! National Grid Combines Core-Keyhole with Mini-Directional...