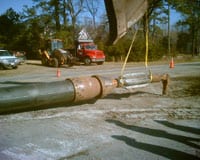 Faced with the prospect of halting new development, the City of Wilmington, N.C. was in need of a repair solution for a section of the city’s force sewer main. After attempts to line the main failed, KRG Utility, Inc., Lenoir, N.C., was called in to attempt a difficult large diameter pipe burst.

KRG Utility president Jeff Greene said, “The section of main ran right along side of a busy roadway with telephone poles every 200 feet with power, phone and cable lines. If the pipe bursting didn’t work, the city would have had to shut the road down and deal with the power lines. It could have been a mess.”

KRG Utility provides pipe bursting and sewer camera services to North and South Carolina, as well as portions of Virginia and Georgia. With 38 employees, Greene along with his brother Marty is able to maintain three pipe bursting crews and two TV crews. In addition, KRG crews offer slipling services, a method that has ties to the company’s beginnings.

According to Greene the company began with his father, a backhoe and a large pipeline project. Greene said, “My dad started the company back in 1979. Around that time a subsidiary of a large copper mining company had a sliplining project in Virginia and hired my dad. At that time, all he had was a backhoe. He ended up being paid $500 a day to dig insertion pits for that project. He worked for them for over a year, digging holes everyday. At the end of that job, the company decided it was going to getting out of the sliplining business and they sold everything on that job and my dad bought it.”

Soon after, Greene’s father was able to land a long-term project in Fayetteville, NC that solidified the business and kept it growing. After his father’s passing in 1992, Jeff, (who holds an engineering degree from NC State), left his job at an engineering firm to help his brother Marty run the family business. Today Jeff and his brother run the company. Jeff serves as the company’s president and handles the meetings, billings, bids, etc. and his brother Marty handles the day-to-day operations. 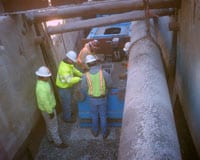 TT Technologies product specialist Brian Hunter said KRG Utility is no stranger to pipe bursting whether it is static or pneumatic. He stated, “The company owns and operates a range of pneumatic pipe bursting tools, including several mid-sized reversible tools and some larger diameter rear expander configured tools. In addition, they just recently added a static bursting system. With their level of experience and expertise, they were well positioned to take on the challenging bursting project in Wilmington.”

According to Greene they keep their bursting tools working. He said, “We’ve done a good deal of bursting in Greensboro and we’re working quite a bit in Winston-Salem. Id’ say we’re averaging between 2,500 and 3,000 feet of bursting per month. Now with the new static machine, we want to be able to promote water line bursting.”

According to its Web site, the city of Wilmington operates two wastewater treatment plants and a collection system that handles, on average, 16.80 millions of gallons of wastewater each day and capable of handling 27.5 MGD. The system includes approximately 370 miles of gravity sewer lines and 25 miles of pressurized force main. Like many cities throughout the country, growth and age are pushing Wilmington’s infrastructure to the limit.

In a Special Order of Consent (SOC) with the state of North Carolina, the city of Wilmington agreed to repair its Northeast Interceptor (NEI) force main within a specific amount of time or face steep fines, up to $1000 per day. In addition, the state declared that it was unacceptable for the city to continue to issue building permits, specifically sewer extension permits, within NEI service area until the repairs were complete. While repair work began months earlier, the final version of a the SOC contract was approved by the state in September of 2007 and stipulated that work must be completed by June of 2008 or fines would be imposed. 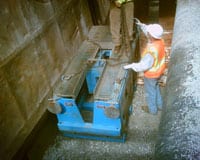 Up to this point, much of the lining of the force main sewer was already complete. However, this particular section of main had been lined three times. Each time it failed to maintain pressure under testing. After attempting to cut out the three liners from almost 500 feet of sewer main, the lining contractor was instructed to find another solution to the problem. KRG Utility was called in to determine the possibility of replacing the existing main with High Density Polyethylene pipe (HDPE) through static pipe bursting.

Greene said, “We do a lot pre-cleaning and TV work for the company that attempted to line that section of force main. They got themselves in kind of a bind down there in Wilmington and gave us a call. Over a two-month period, the liner attempts had failed. They needed to get that job done. So they talked to the engineer and called us to come out and try to pipe burst it.”

Crews utilized the Grundoburst 2500G with over 300 tons of pulling power to burst the 500 feet of 20-inch ductile iron force main with the three high-pressure liners still inside and replace it with 22-inch diameter HDPE. KRG worked with TT Technologies modify cutter head tooling to work for this challenging situation.

According to TT Technologies static pipe bursting specialist Mark Maxwell the large static bursting unit works on the same principals as smaller units, just on a much bigger scale. He said, “The Grundoburst 2500G really opened the door for large diameter static bursting. It’s really designed for steel and ductile iron pipes in the range of 24 to 48 inches in diameter and even larger. But right now there are specially designed cutter heads are available for these large diameter pipes.

For this project, we brought in this unit because we weren’t exactly sure what to expect from a pipe that had been lined several times. As it turns out, we only operated at about sixty percent of the machine’s capacity.” 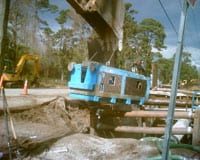 The project was divided into two bursting runs, one of 180 feet, the other 320 feet. KRG crews prepared a machine pit in between the two runs that measured 10 feet wide by 35 feet long. The pipe was located approximately 7 feet deep. With a high water table, KRG crews dewatered the site continuously throughout the project and the pit was extensively shored. KRG crews completed the shorter of the two runs first. They began by threading the exiting pipe with the Quicklock bursting rods. Once the rods were through the pipe and at the insertion pit, the large diameter cutter head, expander and the fused HDPE were attached.

The first run was completed without incident taking approximately 1.5 hours of actual bursting time to complete. The second was performed two days later. The Grundoburst 2500G, still set in the machine pit, was turned 180 degrees in order to burst the 320-ft section of pipe. Again, the crew rodded the pipe section then attached the cutter head, expander and new HDPE. Additional care was taken on this section because it ran directly underneath a pressured water main located right at the end of the run. Ultimately this section was successfully burst and replaced in approximately 3 hours.

Once the new HDPE was installed it was connect to the ductile iron force main with mechanical joint adapters. The line pressure test was successful and the city was extremely pleased to have the project completed. According to public documents, the sewer moratorium was lifted by the state in March of 2008.