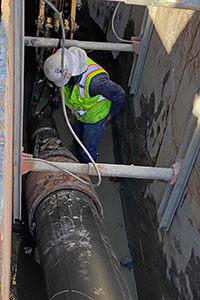 Trenchless technology is no stranger to difficult working conditions. Often, various trenchless methods are employed specifically because conditions are challenging both above ground and below ground too. That was the case on a recent project for a California bay area airport. An existing 15-inch VCP pipe sanitary sewer main serving the local municipal airport needed to be upgraded and replaced with new pipe.

The sewer pipe, which serves an airport terminal area, is located in close proximity to San Francisco Bay. Ground conditions including sand and water were such that trenchless rehabilitation and replacement options were preferable over open cut construction for the project.

According to trenchless Specialist George Mallakis with trenchless equipment manufacturer TT Technologies, Aurora, Il., the project was a good candidate for trenchless applications. He said, “The objective of the project was to rehabilitate the existing 15-inch Vitrified Clay Pipe sanitary sewer. In order to limit disruption, overcome sandy soil conditions, ground water, and pipe depths up to 15 feet, trenchless rehabilitation methods were desirable. The 3,200-foot project was divided into three parts with an open cut section, a section to be lined and a final section to be replaced through static pipe bursting.”

According to West Yost Associate Engineer Anne Girtz, planning the bursting section of the project was a collaborative effort. She said, “Ultimately, George was instrumental in assisting West Yost in weighing all the pros and cons related to bursting during the design portion of the project.  That way we were able to address the soil conditions, depth of installation and size of expansion in order to make the best effort possible and have a biddable, constructible project.”

Utility contractor Ranger Pipelines, San Francisco, CA. was awarded the project to replace all portions of the sanitary sewer. Ranger Pipelines specializes in underground construction projects and has been serving greater California since 1982. The highly successful contractor is skilled in projects that require complex shoring and heavy dewatering systems because of difficult ground and site conditions. They have extensive experience working in congested urban areas and in rural areas with a variety of environmental constraints throughout California, making them particularly well suited for the airport sewer main project.  In addition, Eduardo Davila, Ranger Pipeline’s project manager and crew have prior experience with pipe bursting and are efficient with the method.

Mallakis said, “Due to the proximity of the project to San Francisco Bay, geotechnical borings indicated that there was very high groundwater and a high likelihood of encountering Bay Mud soils during excavation. Bay Mud, as it’s called, is characterized by soft, unconsolidated silty clay, saturated with water making it an element to contend with, especially in an underground utility project. The Ranger Pipelines crew was ready for the difficult conditions.”

A Grundoburst 1900G static pipe bursting system from TT Technologies was selected for the project. 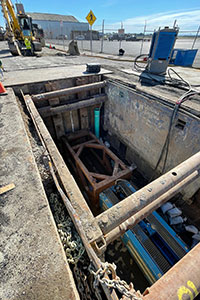 With prospect of geotechnical conditions and the potential to encounter “Bay Mud” soil conditions, project planners were looking to maximize the use of trenchless technology on the 3,200-foot sanitary sewer project.

Static pipe bursting has experienced a high level of growth in North American.

According to Mallakis, several things have contributed to the method’s popularity in the marketplace.

He said, “The growth of static pipe bursting in North America has been significant over the last ten to fifteen years.  The method was introduced several years after pneumatic pipe bursting, which has had a tremendous impact on the trenchless construction industry. The static or hydraulic bursting process has become an extremely popular trenchless method for several reasons.

“First, the method is very capable. It can be used for a wide range of pipe diameters, as well as pipe material. The second is the ability to install any number of product pipes.  From fusion welded and restrained joint to non-restrained joint and sectional pipes, static pipe bursting can install an ever increasing number of pipe options. This is really a key to the success that static pipe bursting has had in North America. Product pipe specification can often determine or limit the options that contractors have for completing projects. Many utilities or owners are partial to or invested in specific pipe material for their systems.”

For the municipal airport project, High Density Polyethylene pipe (HDPE) was chosen for the bursting.

The pipe was in poor condition. CCTV inspection highlighted various defects that were present through the area designated for replacement. The total footage was divided into portions that were replaced by open-cut, rehabilitated with CIPP, and replaced by pipe bursting.

Girtz said, “The method of rehabilitation was selected based primarily on the type of defects to be corrected and the pipe material. The open-cut excavation and replacement section was performed due to the existing pipe having settled over the years and having portions of reverse slope.”

Mallakis said, “Because of the pipe depths, as well as the ground and soil conditions, a thicker wall, DR 11, product pipe was recommended. That also contributes to overall bursting difficulty. In order to provide equivalent HDPE DR11 pipe capacity to the existing VCP pipe, a two-upsize burst would be required. Ranger Pipelines was given the option to utilize a thinner pipe a DR17 pipe at a smaller diameter or the DR11 pipe at the larger diameter. Ultimately the thinner DR17 pipe was used.”

According to Girtz, the decision was made to include the cost of manhole removal and replacement with the cost of pipe bursting, giving the contractor the option of how they wanted to approach the bursting without dictating means or methods.  In the end, the contractor decided to burst through some of the manholes, increasing the pull length. 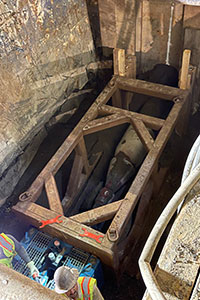 Static pipe bursting proved to be an efficient and effective choice. Bursting times ranged from one to three of sections ranging in length from 240 to 635 feet.

The geotechnical conditions were studied extensively during the design process as they can pose challenges during pipe bursting. Girtz said, “Potential issues discussed in employing pipe bursting included: a hole collapsing on the pipe; an increase in friction on the new pipe during the pullback; ‘wandering’ of the bursting head; and disturbance of adjacent utilities or structures.  To mitigate this, TT Technologies recommended specifying static bursting and application of a bentonite slurry.”

Ranger Pipelines used a 500 gallon bentonite pump and mixing system to deliver lubricant through hoses inside the pipe being pulled in. The lubricant is released behind the expander filling the temporary annulus and keeping sands wet and open while thickening and holding water back from grabbing the new pipe. That allows the pipe to be more slippery and helps prevent resistance and pipe stretching, especially in the longer runs.

There were no traffic issues with the implemented traffic control plans, the location of the existing sewer line allowed the layout of the pull and insertion pits with minimum impact to the public. On average, the machine pits were 35 feet long by 10 feet wide and 12 feet deep.

The pits were located at existing manholes, allowing Ranger Pipelines to pull in both directions. According to Davila, Ranger crews were able to save time bursting by positioning launch and exit pits in a way that bursting can be completed in two directions utilizing one machine pit. He said, “By being strategic about the jobsite layout, the contractor can place a machine pit in the middle of two bursting runs. That way when one burst is complete, the contractor can turn the unit 180 degrees and burst in the other run. That technique can save time and help limit overall disruption. If things align properly, it is even possible to simultaneously rod the next run as the bursting rods pass through the bursting unit.”

Overall, the ground conditions were better than anticipated, which helped with bursting efficiency. Bursting runs varied in length from the shortest at 242 feet, to the longest at 635 feet. The pipe bursting times ranged from one hour to three hours depending on the length of the run.

Mallakis said, “This was a highly collaborative, well-planned and executed project. Everyone really contributed at a high level. And the results show that. Very successful project.”