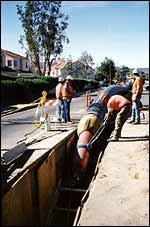 The Grundocrack Goliath is lowered into the launch pit.

Hydrogen sulfide gas is one of concrete’s biggest enemies. Over time, the build up of that gas can destroy an RCP sewer line. The problem occurs more commonly in the warm, dry climates of the Southwestern and Western United States. That was the exact situation that the Padre Dam Municipal Water District faced recently in the City of Santee, CA.The district’s existing 21-inch RCP sewer trunk line deteriorated to the point were officials decided it was time to replace it. Padre Dam Assistant Engineer Pat Rymer explained, “This particular section was part of the backbone of the system and was installed in 1958. In 1999 we actually had a collapse of that pipeline. That prompted us to go ahead and expedite the replacement project.”Once the decision was made to replace the 3,900-ft sewer line, how to replace the line was the next issue. After considering the options, the district decided to specify pipe bursting in the bid. ARB Constructors, Lake Forest, CA was awarded the bid. Using a Grundocrack pneumatic bursting tool from TT Technologies, Aurora, IL, ARB would attempt to replace the failing 21-inch pipe with 28-inch O.D. SDR 19 HDPE with an I.D. of approximately 25 inches.

The Padre Dam Municipal Water District (PDMWD) is probably best known for its water recycling facility. From their youth, many people may remember the educational film about, “The Town that Launders Its Water.” The water reclamation plant was the first one built in the United States and dates back to 1959. The facility is able to produce two million gallons of recycled water per day. One million gallons of that reclaimed water is used to maintain several lakes operated by Padre Dam and irrigate landscaping in area parks. The other million gallons is sold to various commercial and governmental agencies with irrigational needs. The water is safe for body contact, but it is not treated to potable water standards. The failed trunk line in Santee feeds directly to the plant.In addition to the water reclamation facility, the PDMWD provides water and wastewater services to an 85-square-mile area of eastern San Diego County. The service area population totals 134,600, 70,000 of which live in the city of Santee. While still a public agency, local city and county officials do not govern the PDMWD. The PDMWD consisted of a five-member board that is elected during general elections.Naturally, when a large-scale rehabilitation or replacement project occurs, members of the PDMWD work to provide an economically and environmentally sound solution to the problem. The location and nature of this sewer line replacement project gave the PDMWD the opportunity to use pipe bursting for the first time in its district. 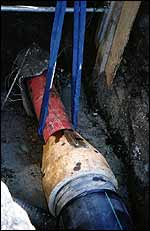 The 18-in. Grundocrack replaced and upsized 21-in. RCP with 28-in. OD HDPE. The original RCP line had deteriorated from years of exposure to hydrogen sulfide gas.

Having never bid a bursting job before, Rymer needed to do some research. He said, “When we first started, that was our biggest concern; how are we going to spec this? But we have a very active inter-agency group that works on design specifications and parameters. They were able to find a similar spec and ‘massage’ it a little to fit our situation. We also utilized information from the web, manufacturers and other entities to build the final project bid.”According to ARB Division Manager Dave Arthurs, the scope of bursting was increased with a little convincing. He said, “The original outline called for approximately half of the job to be completed through pipe bursting and the other half through traditional open cut. We looked at the project closely and realized we could complete the entire 3,900 feet through pipe bursting and save everyone a lot of headaches. “Rymer said, “The downstream portion was earmarked for bursting, but the upstream portion was let as open cut. Dave recommended bursting for the entire project and we were glad he did. It really made a difference in restoration and paving costs.”If completed as an open cut project, over 50 mature pine trees would have had to have been replaced. According to Rymer, some trees had trunk diameters in excess of 12-inches. To complicate matters further, neither Padre Dam nor the city of Santee owned the trees. A residence association that maintained a complex of condominiums along the replacement route owned the trees. As it turned out, through pipe bursting, only two trees needed to be replaced.

One of the most significant aspects of the Padre Dam bursting project was the complex bypass system put in place by ARB. Arthurs said, “We received flow statistics from Pat at Padre Dam. With approximately 75 service laterals, we knew the bypass would be substantial.”The project was divided up into four sections with each section averaging 800 feet. The ARB crew used 10-inch HDPE and massive 10-inch diameter pumps for the main bypass. It took approximately one week to set up an 800-ft section of bypass. Pipe Bursting Specialist Rick Melvin from TT Technologies provided technical support on the project. He said, “This was the most sophisticated bypass I’ve ever seen. Services were individually pumped with very quiet electric pumps. The entire system was monitored 24 hours a day until each section of bursting was complete. The bypass was designed to handle in excess of 2 million gallons per day. That’s amazing!” 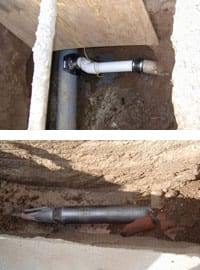 Sections as large as 600 feet of 28-inch SDR 19 HDPE were installed in a single run. Pipe rollers were used to lessen pipe drag.

Each 800-ft section of the project was sub-sectioned into two or three runs of several hundred feet each. The ARB crew used an 18-inch diameter Grundocrack Goliath from TT Technologies with a 32-inch O.D. rear expander. To provide the needed pulling tension a 20-ton Grundowinch was also used. According to Melvin, the Grundowinch played a key role. Melvin said, “The Grundowinch provides constant tension at variable speeds. It guides the tool through the host pipe while compensating for changes in speed. This prevents slack from developing in the line and helps the bursting go smoothly. This is very important with debris in the host pipe.We discovered a lot of debris in the 21-inch RCP. For pipe bursting to be successful, most of the debris needed to be removed. Anywhere from 5 to 10 yards of debris was removed from each section of pipe before bursting. Much of the debris was aggregate and rubble from the deteriorated crown of the pipe.”Another key to the success of the Padre Dam project was the use of bentonite lubrication during each burst. ARB employed two Grundomudd Bentonite mixing and delivery systems to produce the necessary mixture and amount of bentonite slurry to overcome friction and cobble soil conditions. A 300-gallon model was used to mix the slurry and a 500-gallon model was used to deliver the mixture to the burst site.Over the course of several weeks, the ARB crew tackled the 3,900-ft project bursting lengths from 300 to 600 feet. Bursting times varied between two and five hours. After a section of bursting was complete, the ARB crew tied services into the new line using standard saddle-Ts with steel clamps. The bypass system was then dismantled and moved to the next section of bursting.

The Padre Dam pipe bursting project generated much interest throughout the surrounding communities. Rymer said, “I’m sure its difficult for the trenchless industry to break into the public sector because everything is generally so conservative. For this particular project, however, there were numerous public agencies that wanted to know more about our bursting project. Many came to see it first-hand. This was one of the first large diameter bursting projects to happen in this area, and it really generated a lot of interest and excitement.”According to Rymer, because the PDMWD has now completed its first bursting project, letting future bursting projects will be easier because the capabilities and benefits of pipe bursting are better known. Rymer said, “On this job we saved trees, paper work and money, not to mention paving. Paving is a very big deal. We had to do some paving launch and receiving pits areas, but it was just a fraction of what we were looking at for open trenching.With the age of our system and the types of pipe we have here, pipe rehab projects are an ongoing issue with us. Bursting is going to get the same consideration as other methods, if not more, for any future rehab projects we have.”