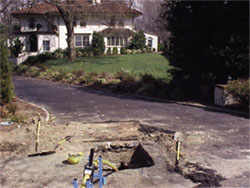 Expensive landscaping, a private driveway and a well-established willow tree convinced the PSE&G crew to use the steerable tool.

Despite the accuracy of today’s conventional piercing tools the desire for a steerable or guided piercing tool is as old as the technology itself. While directional drilling has certainly filled a portion of that “navigational” need in the industry, the method is not applicable to every situation.

The Gas Research Institute (GRI), Chicago, IL, has been instrumental in helping promote the development of new technology through funding, joint ventures and the formation of partnerships. Its latest breakthrough involves one of the largest gas and electric utilities on the East Coast, Public Service Electric and Gas (PSE&G), Newark, NJ, a premiere location equipment developer, Digital Control, Renton, WA, and one of the leading trenchless equipment manufacturers, TT Technologies, Aurora, IL. The result of the group’s efforts is Grundosteer, the world’s first truly steerable piercing tool.

Initial design work on the steerable piercing tool, or guided mole, was first brought to the attention of GRI in the mid-1990s by Foster Miller, Inc. GRI then set out to assemble a team of industry experts to develop, test and eventually market the tool.

According to TT Technologies National Sales Manager Brian Mattson the first prototype came together rather quickly. He said, “The design and operation of the tool is very simple. The DCI sonde transmits pitch and roll information to the operator. The operator makes adjustments to the tool’s course by rotating the air hose. A specially designed tapered head steers the tool. We knew from the start that most of the development and refinement of the tool would come through testing. That’s were PSE&G came in.”

On the Jersey Shores

PSE&G is one of the largest gas utilities on the East Coast. Its service area includes some 6 million residents over 2,500 square miles. They are a major combination utility providing both gas and electric service. PSE&G Distribution Technology Manager George Ragula is a GRI Project Advisor and served in a technical and testing capacity on the Grundosteer project.

Ragula said, “I provided technical input during the early development stages of the project. When it came time to do some ‘shake out’ testing and some prototype testing I volunteered PSE&G because we have some of the most diverse soil conditions anywhere in the country. We have everything, running beach sand, heavy clay, loam, gravel, rock, shale, you name it.”

Over a two-year period, Ragula and PSE&G put the Grundosteer through its paces. Grundosteer prototypes were used in over 50 installations. PSE&G crews caught on quickly. Ragula said, “Our crews use piercing tools day in and day out. So the only additional training needed [with the Grundosteer] is the locating and steering aspects of the tool. That makes it easier to transfer the technology to the people in the field.”

Compared to directional drilling the benefits of a small learning curve are very obvious. Ragula said, “When you take into account the amount of training and expertise you need to run a directional drill, along with work rule restrictions and equalizing overtime, it’s very hard to keep a dedicated crew together on a drill rig.”

Ragula said, “We used the tool on services primarily, but we did some main work as well. We completed major road crossings, restaurant parking lots and environmentally sensitive areas like gas stations and even small stream crossings. We did some difficult culvert crossings too, where you start out at 3-ft, go down to 7 [ft] and come back up to 3 [ft].” Much of that versatility is because of the tool’s design and construction. 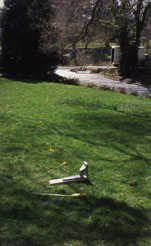 The Grundosteer was traced through the 120-foot run by a DigiTrak locator.

Like standard piercing tools, the 3-inch diameter Grundosteer is pneumatically operated and is powered by a piston inside of a casing. It can be surface launched by hand or from a starting cradle and can bore up to 200 feet. In all respects it operates and functions like a regular piercing tool with one big difference—you can steer it.

A specially designed sonde, located behind the head of the tool, transmits pitch and roll information to the operator. An above ground locator is used to track the tool’s position and movement. Depending on soil conditions the tool can be steered at a maximum 85-ft radius.

Steering the tool is accomplished by rotating the reinforced air hose with a hydraulic tensioning unit. Rotating the hose, in turn, rotates the specially designed tapered steering head.

According to Mattson, ease of rotation was a concern during the early development stages. He said, “The first prototypes were somewhat difficult to rotate. On the second generation, we incorporated a friction sleeve behind the head of the tool. The tool actually rotates within that sleeve, eliminating ground friction by up to 90% during operation.” This is also important because it allows the tool to be operated without any special drilling fluid.

According to PSE&G Practice & Procedure Specialist Bill Figart, the tool has demonstrated its ability on several difficult installation jobs. One recent job in Burlington, NJ showcases the benefits of a steerable piercing tool.

Figart said, “We needed to replace 120 feet of an existing 2-inch bare steel service that was leaking due to corrosion. Because of the nature of the load, it needed to be replaced size for size so a live insertion was out of the question. The local operations district met with the homeowner and explained what needed to be done. The owner was very sensitive to any kind of excavations on his property because of expensive landscaping and a private driveway. To ensure minimal disruption and disturbance, the guide piercing tool was chosen for the job.”

Throughout the 120-ft run, the Grundosteer had to avoid several major obstacles, as well as perform multiple direction changes. Because of the location of the main connection the launch pit was located on the west side of a 20-ft wide driveway. The bore path had to travel under the driveway to the east. After crossing the driveway, the tool needed to turn left 30 degrees and travel east-northeast toward the house.

While making the 30-degree turn, the tool also needed to pitch up in order in order to compensate for an 8-ft change in elevation between the launch pit and the exit pit located next to the house. Figart said, “This was a very challenging section of the run. We had to make up the change in elevation and avoid a well established willow tree.” 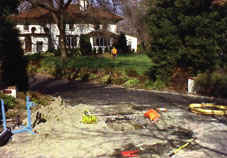 The homeowner experienced only minor disruption during the replacement of his 2-inch gas service. Because of load requirements, live insertion was not applicable.

After being launched and traveling under the driveway, the tool was successfully steered 30° to the left and pitched up to meet the change in elevation. Figart said, “The tool was very responsive to position corrections in the clay type soil. Sometimes these corrections were severe due to the grade change. We also had to maintain the 3-ft cover requirement so we were constantly steering it.”

After approximately an hour and 50 minutes the Grundosteer exited at the receiving pit. After removing the tool, the PSE&G crew then connected the new 2-inch HDPE line to the Grundosteer’s air hose and pulled in the new line while pulling out the air hose.

Figart said, “The speed of the tool seemed faster than conventional piercing tools. It worked extremely well and so did the locator. We were very pleased. Looking back at the job, the only alternatives we had were trenching with a backhoe or vibratory plow which would have resulted in extensive lawn restoration.”

Ragula sees a bright future for the guided piercing tool. He said, “This tool fills a particular need and definitely compliments our existing equipment. We see this as a really big winner for us on the gas side of PSE&G. In addition, there is a high level of interest on the electrical side. For other utilities that use piercing tools day in and day out, adding this tool is a no brainer. There are definitely uses for it in any operating district.” 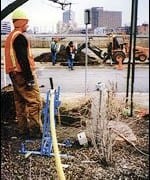 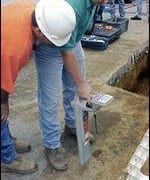