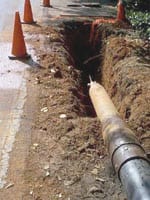 Having one of the most experienced and aggressive in-house pipe bursting programs in the United States has made the Columbus Water Works, Columbus, GA a model for other utilities to emulate.

Columbus Water Works (CWW), Columbus, Georgia has a dubious distinction. The water and sewer utility is undoubtedly one of the most experienced pipe bursting utilities in the United States. Roughly translated, more pipe bursting has been completed in-house by the CWW than any other comparable water and sewer utility in the United States. The results of their efforts are substantial and the cost savings significant.

So, how does a utility go from having no practical experience with pipe bursting to becoming a pipe bursting model for public utilities around the country? Easy, according to Columbus Water Works Manager of System Services Joey Murphy, it is all in the planning.

In the early 1990s the CWW began a sewer line evaluation program designed to identify problem areas within the system. Workers thoroughly evaluated sewer mains through smoke testing, manhole inspections, dye testing and CCTV. Astonishingly, the study identified over 100,000 lf of sewer line that needed replacement because of deterioration, collapse and root infestation.

Murphy said, “After the study was complete, we set out to address the five most critical projects. Approximately 6,100 lf of pipe needed to be replaced or rehabilitated immediately. We contracted several different rehabilitation methods. Two of the projects were open-cut, two utilized cured-in-place and one used pipe bursting. The total cost for the five projects came to $62.38 per linear foot. We knew with over 90,000 more feet of work in front of us that we’d have to find a more economical solution.”

In 1997, with the help of pipe bursting equipment manufacturer TT Technologies, Aurora, IL, the Columbus Water Works found its economical sewer replacement solution in the form of an in-house pipe bursting program, one of the first such programs in the United States. Today, they are a model of pipe bursting efficiency for other municipalities to emulate.

Facing an incredible amount of work with an almost more incredible price tag, CWW looked for an economic solution to its sewer replacement predicament. After calculating the costs of the first 6,100 lf, a comparison was made between contracted work and what similar sized projects would cost by utilizing in-house labor for traditional open cut methods. The price per linear foot dropped from approximately $62 to $38. Impressive savings, but when calculations were taken one step further, combining in-house labor with pneumatic pipe bursting (including purchasing and operating), the results were dramatic. Cost per linear foot dropped to $22.

In August of 1997 the decision was made to purchase a pneumatic pipe bursting system. They chose an 8-inch diameter Grundocrack Hercules from TT Technologies, along with rear expanders for bursting 8-, 10- and 12-inch pipe, a 10-ton constant-tension Grundowinch and a Grundomudd bentonite mixing and delivery system.

According to TT Technologies Pipe Bursting Specialist Eddie Ward The system that CWW purchased is standard gear for high production pipe bursting. He said, “The rear expander tool is a second generation tool. When we began bursting in the late 1970s and early 1980s, straight barrel tools with front expanders were used. They can be removed through manholes or reversed out through the newly installed pipe. Their effectiveness, however, is somewhat limited by soil conditions, length of run and host pipe material.

Today the rear expander configuration is the one most commonly used in the industry. It provides several key advantages. First, it allows the use of bentonite in conditions that warrant it. Second, the rear expander tool configuration means that a majority of the tool itself is actually in the pipe. This allowing increases bursting power and assists in maintaining line and grade.”

Work began immediately to assemble a team and begin training.

The Columbus Water Works (CWW) started their in-house pipe bursting program with a 8.5-inch diameter Grundocrack Hercules from TT Technologies, Aurora, IL. They have since added a 14-inch diameter tool for larger diameter bursting work (12-inch and beyond).

TT Technologies provided on-site training to CWW crewmembers and progress was made quickly. The pipe bursting crew was comprised of four full-time members including a coordinator, an operator and two team members. They received part-time assistance from the sewer cleaning crew and the sewer investigation team. Crewmembers caught on to the basics of pipe bursting and soon it was time for their first solo project.

The first project called for the replacement of 1,600 linear feet of 8-inch concrete sewer pipe with 10-inch HDPE. The project took place in a heavily populated and traveled area of downtown Columbus, an ideal setting to highlight the social benefits of pipe bursting as well as the economical benefits.

Murphy said, “The initial projects proved all of our theories about pipe bursting true. The projects went smoothly and when we calculated the cost, the figures were impressive. The first project was completed in less than one month for a cost of $29,000.” Traditional open cut method costs were calculated at $170,000.

From 1997 through 1999, the Columbus Water Works in-house pipe bursting crews replaced over 13,400 linear feet of 8-, 10-, and 12-inch VCP and RCP sewer pipe with their pneumatic system. In 2000 it became apparent that the utility was starting to enter a new phase in its pipe bursting program.

Murphy said, “Even as we were using our original equipment and getting used to it, we knew there were other projects out there with larger diameter pipes. So we decided to make the investment and upgrade our equipment to accommodate larger diameter bursting and begin the Milbranch project.”

The CWW pipe bursting crew is comprised of four full-time members including a coordinator, an operator and two team members. They receive part-time assistance from the sewer cleaning crew and the sewer investigation team.

The Milbranch project marked a new level of pipe bursting proficiency for Columbus Water Works. The utility was moving from small diameter bursting (6-, 8- and 10-inch pipes) to larger (12-inch and beyond) more difficult mains. This step required a larger more power tool. The CWW turned again to TT Technologies.

Ward said, “The addition of a 14-inch diameter Grundocrack Koloss and several new expanders greatly increased their pipe bursting capabilities. Their bursting program could now address 14-inch, 16-inch and even diameters into the 20-inch range.”

The Milbranch project called for the bursting of over 8,000 lf of 12-inch concrete pipe and replacing it with 15-inch HDPE. According to Murphy the benefits of pipe bursting this project could not be denied. He said, “The selection of pipe bursting as the rehabilitation method was made after estimates of open cutting the project came in around a million dollars. The cost of pipe bursting, using in-house personnel with some sub-contracted help, came in about $500,000 less. Those figures combined with less disruption to our customers and the lower environmental impact made pipe bursting the choice hands down.” The Milbranch project began in June of 2000 and continued, between other projects, until April 2001.

To date, including the Milbranch project, the Columbus Water Works’ in-house pipe bursting program has been responsible for replacing over 28,000 lf of sewer main at a cost savings of well over $1 million.

The future of pipe bursting at the CWW appears to be very active according to Murphy. He said, “Pipe bursting has migrated to our preferred method of sewer replacement. We have a highly trained staff that can perform pipe bursting efficiently and effectively. We have also begun cross training our other collection employees on how to use the bursting equipment. And we continue to update that equipment. In fact, we are purchasing a 24-inch expander for bursting even larger mains. And we are look at the potential for using pipe bursting to replace our cast iron water mains.”

The next big step for the CWW is replacing the sewer main under Cherokee Avenue. The over 50-year-old concrete main is 21 inches in diameter and represents the largest bursting project CWW has undertaken to this point. According to Murphy, the utility’s bursting program is a continuous operation with big goals.

He said, “Our plan is based on need. Even as we start bursting larger diameter pipe, the smaller diameter bursting is still going on. The smaller diameters make up most of our system. That being said, our largest diameter is 72 inches. And heck, one day I might be bursting it! That’s what I’m looking at. This equipment and technology has been such a blessing to the industry and especially to us; the sky is the limit. We don’t have any reservations what so ever in saying, ‘let’s burst it.’”

Every municipality hopes to avoid emergency sewer line repair. However, with most cities and towns around the country dealing with aging infrastructure, emergency repair is a fact of life and municipalities prepare for it accordingly.

Whether an accurate description of pipe bursting or not, it is still considered by many a new technology despite having been used successfully for over 20 years. With that label in place, the tools do not typically get hauled out in the middle of the night to fix a failed sewer line. According to Columbus Water Works Manager of System Services Joey Murphy, municipalities might want to change their way of thinking when it comes to pipe bursting.

He said, “For emergency repairs, this equipment has been a welcomed addition. In an emergency setting we have found the method is comparable to an open cut excavation, as far as time to set up, burst it and be gone. So we are not only using our [pipe bursting] equipment for preventative maintenance, where we’re replacing aged lines, we use it for emergency repairs as well.”

Murphy added that it is always a good feeling to successfully finish an emergency job through pipe bursting. In addition to correcting the problem, crews do not have to face lengthy restoration after the work is done because they were able to use the trenchless method.

The Dynamics of Trenchless Piercing Tools in the Gas Industry: A look at Nicor...