Over 50 bursts were done averaging 300 feet in length with several being upsized.

Heller Company President Lynn Heller knows when he bids to perform sewer rehabilitation work, there are several government and private entities that need to be considered and satisfied. To accommodate these diverse parties, as well as ensure profitability for his contracting firm—he looked to incorporate the trenchless technology of pneumatic pipe bursting for sewer line rehabilitation and replacement.

Based in Hot Springs, AR, Heller started his contracting firm 20 years ago, servicing underground utilities and water and wastewater treatment plants and pump stations in the state of Arkansas. Heller became aware of the bursting process through other contractors and trade publication articles. Over the two decades, Heller has done well using the traditional method of trench and replace. Now with the addition of pipe bursting, he is prepared to grow his prosperous business.

The Hercules Grundocrack pipe bursting tool is easily launched by the Heller crew.

In an effort to secure the work to replace approximately 22,000 linear feet of failing sewer lines in Benton, Arkansas, Heller’s staff bid it to incorporate pipe bursting. With bursting, Heller’s Superintendent for Pipe Bursting Dennis Sanders knew they could offer several advantages which would not be available from other contracting firms.

Compared to open cut, the positive social factors afforded by bursting included minimal to no surface disruption, no interruption of sewer service, and rapid installation time. Heavy duty polyethylene pipe (HDPE) is often used in conjunction with pipe bursting because of it’s flexural qualities. Excellent flow characteristics as well as continuous installation of fused sections make it ideal for the pipe bursting method. 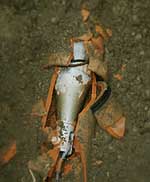 Existing 8″ clay with rubber gaskets were no match for the Hercules Grundocrack pipe bursting tool.

Heller’s innovative bid did the trick – they were awarded the Benton rehabilitation job. Heller and Sanders immediately coordinated aspects of the project with Ed Gregory and Pat Keogh of the City of Benton Wastewater Department. Heller and crew had previously met with several key personnel with the City of Benton to explain the concept of pneumatic pipe bursting. They received a positive response at the time, which eventually led Heller to utilize pipe bursting for a greater amount of replaced footage.

Bursting And Replacement Of Pipe

Heller crews arrived in Benton with plenty of bursting equipment and tools for the task. Specifically, they brought in their Grundocrack Hercules and Mini-Olympus bursting tools, along with their GRUNDOWINCH 10-ton hydrostatic winch.

The Mini-Olympus 7 inch diameter bursting tool was used to replace 6 inch diameter pipes. Crews used the 8.5 inch diameter Grundocrack Hercules to perform the 8 inch and 10 inch diameter host pipe bursts. Most trenchless installations were performed from manhole to manhole, eliminating the need for excavating exit pits. In all, there was over 16,000 feet of lines replaced by bursting. The remaining 6,000 feet was at shallow depths in open fields, dictating open-cut as an economical method of replacement.

The GRUNDOWINCH positioned at a manhole. Most installations were performed from manhole to manhole, eliminating the need for excavating exit pits.

Over the next several months, Heller’s crews worked in over fifty locations in the city of Benton. Installations ran along streets, curbs, and sidewalks. Replacement runs averaged 300 feet with several installations requiring upsizing of pipe. The increases were 6 inch to 8 inch and 8 inch to 10 inch. The longest run (8 inch clay to 8 inch PE) was over 500 feet at a depth of 12 feet. Crews were able to accomplish a wide variety of installations because of the creativity of the project manager and the versatility of the two Grundocrack tools.

Much of the construction time was involved in site preparation and lateral connections. Heller made a point to inform the public of the progress of the project by being available for questions and by going door-to-door. He also planned installations so that there was little or no inconvenience for the residents.

As Wastewater Manager for the City of Benton, Gregory stated, “People made comments about how much better the bursting process was compared to tearing-up the streets.” Gregory also related how pleased he was with both the process and contractor. He indicated that he would recommend pneumatic pipe bursting to any other community, and hoped to make future sewer replacements by bursting. In addition to conducting the replacements in a proper fashion, Gregory admired how well Heller had communicated aspects of the project to the citizens of Benton.

Heller looks forward to winning more bids across Arkansas by being able to offer the trenchless option of pneumatic bursting. In fact, armed with bursting tools, he plans to expand their service area. “Traveling out of state becomes more realistic than ever,” said Heller.

Reflecting on his client’s reaction to the rehabilitation, Heller stated, “Public relations with customers and individual property owners was great! In addition, the utilities were very appreciative.”

WINNING THE WATER WAR: Pipe Bursting At The LA Department of Water and Powe...
Scroll to top