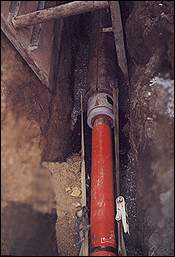 An increasing number of sewer, water and gas projects bid today are designed with trenchless technology in mind. Advances in trenchless methods such as directional drilling, horizontal boring, pipe bursting and pipe ramming has allowed project engineers to think in ways they were unable to just a few years ago. Many jobs specifically require the use of trenchless technology to some degree. Contractors that are able to utilize a range of trenchless equipment are benefiting from this new way of thinking.

The Decatur Township, Pennsylvania recently awarded a large-scale sanitary sewer installation project. While a good portion of the project was designated as open-cut, several key areas required the use of trenchless technology. Local water and sewer contractor Dale Wisor of DJ Wisor and Sons, Inc. accepted the challenge.

The job called for the installation of 55,000 lf of new 8-inch SDR 35 PVC sewer main and 4-inch laterals. Eight sections of sewer main traveled under state roadways. The Pennsylvania DOT required that the new sections be placed within 16-inch steel casings. The Wisor crew decided to use a pipe ramming tool for placement of the steel casings and a piercing tool for installation of the 4-inch laterals. They turned to TT Technologies Product Specialist Mike Schultz for technical support.

The Wisor crew chose a 5 3/4-inch diameter Grundoram for the lateral lines and an 8.5-inch diameter Grundoram Hercules pneumatic pipe ramming tool for the 16-inch casings. Because of the large number of bores, conventional augering was not economical. According to Schultz, the accuracy of both tools was essential to success of the job. Schultz said, “Because this was a gravity fed sewer system, all of the bores and rams were grade critical. The system needed to have a specific amount of ‘fall’ in order to ensure proper flow.”

Grade critical bores and rams were not the only things that made this project difficult. The soil conditions in Decatur Township can be extremely challenging. Schultz said, “The Wisor crew encountered a little bit of everything on this job including wet areas, layered shale, coal and clay. Some of the bores began in clay and ended in coal. Some areas even had abandoned mine shafts to avoid.”

A 5 3/4-in.-diameter Grundomat piercing tool was used to install 4-in. lateral lines.

In all, 35 lateral installations, ranging in length from 35 to 60 feet, were completed using the piercing tool. Depending on length, bores took a half-hour to 45 minutes to complete. Proper grade was maintained by using a Grundoscope aiming frame and surveyor stake, a smart level and a launching cradle. But even with these set- up tools, the piercing tool itself needed to maintain a its path in difficult soil conditions.

According to Schultz, the Grundomat was the perfect choice for this project. Schultz said, “The Grundomat piercing tool has a reciprocating head. The chisel head assembly moves independently of the main casing, creating a pilot bore for the rest of the tool body to follow. This ultimately leads to greater bore accuracy.”

The Wisor crew performed eight separate pipe rams. Installations averaged one hour and ranged in length from 40 feet to 60 feet. Pipe ramming accessories including a segmented ram cone, two tapered ram cones and a soil port adapter were used to make the connection between the 16-inch casing and the 8.5-inch diameter tool.

The crew paid special attention to the grade of the rams by using a transit and smart level to calculate the correct angle needed to obtain the proper fall for the system, similar to horizontal boring.

In most installations spoil from the casings was blown out using compressed air, other times, the crew used other methods of spoil removal. Schultz said, “Because the length of rams were relatively short, the crew would often remove the entire casing before removing the spoil and replace it with a new one. It was just faster that way.”

Once the spoil was removed, the PVC main line was inserted into the casing. Adjustable “spider-type” spacers were used to secure the 8- inch main line inside the 16-inch casing. This also gave the Wisor crew the ability to make minor adjustments to the grade of the line within the casing.

The trenchless pipe installation methods chosen for this job were ideal. Wisor said, “On a cost per foot basis, these tools saved us money. The piercing tool is very efficient. We would not have been able to complete as many bores from 25 to 60 ft, in as many locations, as quickly, with a directional drilling unit or conventional augering. The same is true with pipe ramming. When you take into account the number and the length of installations, as well as the different locations, conventional augering wouldn’t have been as economical as pipe ramming.”

Decatur Township was extremely pleased with the results of the project. The utilization of trenchless technology in key areas of the project allowed roadways to remain open and kept disruption to a minimum. It also allowed work to be done in difficult access areas where conventional equipment was not the best option.