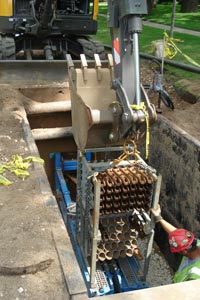 Trenchless technologies have become a significant force in the construction industry. Static pipe bursting in particular has exploded in popularity nationally over the last several years. The method has seen continued growth in the Midwest as well, with several noteworthy projects taking place in Wisconsin, North and South Dakota and, most recently, Minnesota. Red Pederson Utilities, Inc, St. Louis Park, MN completed a sizeable bursting project this summer for the city of Edina, Minn., that included pipe bursting approximately 17,700 feet of cast iron water main and an additional 3,800 feet of VCP sewer main.

The area in Edina where the project took place is a residential development filled with homes ranging in value in excess of $1 million. The homeowners were concerned about maintaining access to their homes and driveways and that no trees (mature shade trees) would be damaged in the process of rebuilding the sewer, water and storm water infrastructure. This was difficult undertaking as some of the streets were as narrow as 17 feet wide.

SEH, Inc., St. Paul, Minn., was contracted to engineer the project. They had previously engineered a number of small to medium sized water and sewer pipe bursting projects in the Twin Cities area. Using experience gained from their previous pipe bursting projects, the team at SEH developed a plan for the reconstruction of the country club area of Edina.

The project was let in the spring of 2008. General contractor Palda & Sons, St. Paul was the low bidder and selected Red Pederson Utilities as the pipe bursting subcontractor. For the over 20,000 feet of bursting, Red Pederson choose a Grundoburst 800G static pipe bursting system from trenchless equipment manufacturer TT Technologies, Aurora, Ill.

SEH offers a comprehensive array of services that includes everything from architecture and airport building and design to municipal engineering, environmental science and much more. Since its beginnings over 80 years ago, SEH has gone through many changes. According to the firm’s Web site, the company started as a one-person operation and grew substantially from there. With the exception of a short time during World War II, SEH has provided professional services continuously for more than 80 years. The company has expanded significantly over the years to now include more than 30 offices throughout the Midwest and Mountain Regions. 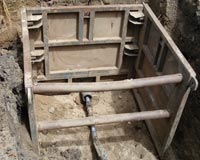 Pederson said, “As a trenchless utility subcontractor, it is very important to work as a team member with the general contractor. The Palda and Red Pederson crews worked well together, greatly improving the proficiency of the operation for the Edina pipe bursting project.”

TT Technologies pipe bursting specialist Mike Schwager provided technical support for the Edina project. He said that static pipe bursting has established itself as a dependable trenchless pipe replacement method throughout the U.S. “Static pipe bursting has really come to the forefront of trenchless pipe rehab and replacement. A lot has to do with the fact that the method has really gained acceptance from the utility construction industry and the fact that the method itself has grown in terms of its versatility,” said Schwager. 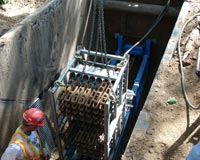 Patented Quicklock bursting rods are linked not screwed together like traditional drill stems or other static systems. This system speeds the installation process as well as the breakdown procedure. The rods can be quickly removed one at a time at the exit pit as bursting is in operation. While HDPE is commonly used, new techniques and technologies are allowing contractors a choice when it comes to product pipe. According to Schwager, other pipe materials are being installed now through static bursting include ductile iron, PVC, specially designed clay and steel.

He said, “Several techniques have been developed by TT Technologies and partner contractors to allow the use of a variety of product pipe options with the static pipe bursting process. Beside its inherent trenchless aspect, this is one of the main reasons that the popularity of the method has really taken off. Often HDPE is the right choice for a project. However, for certain municipalities or parts of the country it’s ductile iron or PVC. It really provides a level of choice and versatility previously not available with the bursting process. The reception by contractors, engineers and municipalities has been tremendous and has led to the continuing growth of the method, as well as continuing innovation from the field.” 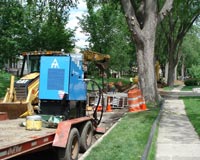 Homeowners in the area were concerned about maintaining access to their homes and driveways and that no mature shade trees would be damaged in the process. Trenchless pipe bursting was chosen to minimize disruption.

The total project was divided into 10 stages with stages one through five scheduled for 2008 and stages six through 10 for 2009. According to Pederson, working in a tight area required a solid plan. He said, “Runs were typically a block long, up to 500 feet total. We developed a very efficient system where we would set up the bursting unit for a particular run in the afternoon, then cover our trench box with steel plates so that it was safe and jersey barrier all the way around. We’d actually push out the rod through the host pipe for the next day’s burst. Then, first thing in the morning, the general contractor would dig the launch pit. We’d push through the remaining bursting rods. Then we’d attach the new pipe that had the [bursting] head on it and was spliced the day before. We would burst the pipe in the morning. That gave us the rest of the day to make connections, cover up all the holes and prep for the next run.”

This process proved extremely efficient and allowed the Pederson crew to operate effectively in an area accented by narrow streets, sidewalks and high traffic. Pederson said, “There’s a big difference between having a big, long trench when open cutting for a mainline versus the ability [in static pipe bursting] to do a service and cover it up, move down the street, do a service, cover it up. Certainly the size of the equipment required to do that is substantially reduced. And the length of the open pit is dramatically reduced in terms of the service connections.” The general contractor reconnected services and completed all pressure testing and chlorination of the new water main.

Pacing was another important aspect of minimizing disruption for residents. Pederson said, “We could only work so far ahead. With our methodology with the pipe bursting, it was quite easy to outrun the general contractor. In order to avoid having large portions of the neighborhood torn up, it was part of SEH’s design (and it was a darn good one), to limit how far ahead of them we could get.”

According Schwager, dealing with various utilities in close proximity proved challenging as well on this project. He said, “Lateral services varied from five to 12 in number, depending on the size of lots. When bursting, each water service was exposed and a 48-inch diameter steel pipe/trench box was set over the crossing of the water main and sewer services. Sometimes the sewer service would be on top of the water main we were bursting and sometimes the sewer service would be under the water main. In either case, the stackable pipe/trench box would allow us to watch as the bursting cutter and expander was slowly pulled past the encroaching service.”

Once the expander had passed the service, the cast iron pipe shards were removed and the service was inspected. This was done on every service line that crossed the water main. On any services that required repairs the SEH inspector would prepare a white board with the street address on it and prop it up in the background of the repaired service and take a digital picture of the repair for record keeping.

The City of Edina and SEH, Inc. were very pleased with the work of the general contractor and Red Pederson Utilities. Schwager said, “Red’s crews worked very efficiently and really kept disruption down to a minimum. This project was very much under the microscope and they did an excellent job. Credit also needs to be given to Paul Pasko at SEH and Wayne Houle, from the city of Edina. They spent countless hours and went above and beyond to make sure this project was going to work for everyone involved, especially the residents of Edina. It was a tremendous effort.”