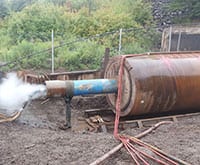 The Ministry of Transportation of Ontario (MTO) has a very active bridge and culvert replacement and rehabilitation program.  With a variety of projects being bid throughout Ontario, contractors are looking for the most effective and efficient methods to facilitate casing and culvert installations.  Because the replacement of culverts usually happens under roadways or rail lines, trenchless pipe ramming is often the preferable installation method. Robust capabilities combined, with the trenchless application’s ability to leave roads, railways and other surface structures undisturbed make the method very appealing for these types of projects.

LTL Directional Drilling, a division of LTL Group, Ontario, Canada, recently completed a culvert rehabilitation project under Highway 61, southwest of Thunder Bay, Ontario, utilizing the pipe ramming method.  The project was being completed for the rehabilitation of a concrete box culvert that fielded significant stream runoff from one side of the highway to the other.

LTL Directional Drilling Operations Manager Travis Kraag said, “It was a concrete box culvert that was deteriorating, basically falling apart.  The Ontario Ministry of Transportation has focused a lot on bridges and now they’re really pushing the rehabilitation of culverts.  This one was starting to separate in the middle.”

The Highway 61 project included the installation of 160 feet of 96-inch casing under the roadway, parallel to the existing culvert.  The overall objective was to install the casing, and then divert the flow of water into the new casing while the existing culver is being repaired. 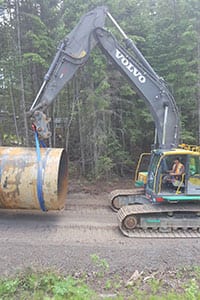 Pipe ramming is a versatile trenchless method that has grown significantly in terms of capability over the last several decades.

TT Technologies pipe ramming specialist Rick Melvin said, “It’s really incredible when you think of how far this method has come over the last 20 years.  Large diameter ramming was really in its infancy back then.  But a handful of contractors began to take on larger and larger diameter projects.  We learned a lot during that time and developed tools, accessories and techniques to take on the largest ramming projects, really in the world.”

According to Melvin in-stock inventory of pneumatic pipe ramming gear is available for 4-inch through 120-inch casing installations.

Melvin said, “The key to pipe ramming success is in the direct heavy connection to the steel pipe.  In-stock ramming gear is able to provide direct connections to 108-inch and 120-inch steel pipe.  For contractors and municipalities, this is a big deal.  It means they don’t need to wait for inventory or fabricate large step up adapters for pipe ramming projects, especially large diameter projects.”

During the ramming process the rammer is attached to the rear of the casing.  The tool then drives the pipe through the ground with repeated percussive blows.  The method can be used for horizontal, vertical, and even angled applications.  In projects like the one under Highway 61, pipe ramming is preferable because it provides accurate installation of casing in a wide range of soil without surface slump. 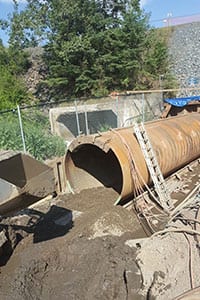 Erhardt and his crew excavated a ramming pit on the tool side of the project, installing sheet pile to created three walls.  Then a concrete ramming pad was added and a fabricated steel I-beam system was established for ramming operations.

A cofferdam was established on the sides of the project to prevent any water runoff from the existing culvert.  Kraag said, “When we started the project, the water moving through the culvert was about 12 feet wide and four feet deep and moving fairly well. Later in the summer, it shrank to about 8 inches deep and maybe 10 feet wide. The water moved up significantly on the sides of our dam, but we were able to avoid much in the way of water issues during the project.”

Once the first 40-foot section of casing was in place, LTL crews installed a cutting shoe on the lead end of the casing.  A cutting shoe is often welded to the front of the lead casing to help reduce friction and cut through the soil.  Kraag, said, “Brandon did a nice job fabricating a custom drive shoe to help reduce the amount of gravitational drop in the casing during the operations.  It was sturdy enough to withstand the intense pressures of the ramming process and helped us remain on-grade for the bore.”

Crews used two 1600 CFM air compressors to power the ramming tool. Bentonite was used throughout the project in order to provide lubrication for the casing as it traveled through the silty clay soils.

Kraag said, “Ramming went really well from the start.  We were averaging about one foot every six minutes.  We didn’t encounter any boulders in the beginning, but when we got about 80 feet in, we started to encounter some 12-inch diameter rocks.  We could tell that something with the ground condition was changing significantly.  After a few more feet of ramming, we met rejection.  Something large was preventing progress.”

LT crews cleaned the spoil out of the casing and did series of explorations with vertical drilling and coring to try to figure out what the object was and how big it was.  After two weeks of investigation, it was determined that LTL had encountered an old bridge abutment under the road that was approximately 12 feet thick, 16 feet tall and 30 feet wide.  During that two week period, the new casing was stagnant, so the crew pumped additional bentonite to try to keep the fluid active and the pipe ready move again when the time came.

Kraag said, “After determining what we had run into and consulting with the MTO, we decided that we would attempt to drill into concrete, blast out pieces of the abutment and attempt to basically chip away at it a little at a time.  We used explosive cartridges, as well as chipping hammers to take out pieces of the abutment.  Then we’d advance the pipe maybe 12 inches to 30 inches at a time with the rammer.  Then go back in the pipe clean out the concrete, re-drill a new pattern, and blast again, sometimes blast it twice.  A remote control skid steer did make cleaning out the spoil a lot easier.” 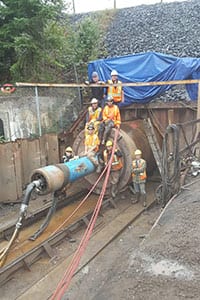 After 14 days of blast chipping, blasting, and ramming the LTL crew was able to get through the abutment.  When full ramming operations resumed at 90 feet in, speeds averaged a foot every two and half minutes until completion.

Once the casing was completely installed, the cutting shoe on front of the lead casing and the ramming equipment were removed.

Kraag said, “The water continued to flow through the original culvert.  After we installed the new casing another group was contracted to divert the flow to the new culvert while the existing concrete box culvert was rehabbed.  We were very pleased to get the casing rammed from one side of the road to the other.  What a project!”

Melvin said, “This job had a little bit of everything, but Travis and Brandon are on top of their game.  They are skilled pipe rammers and obviously ready for anything that might come their way.  Great job by the LTL crew.”