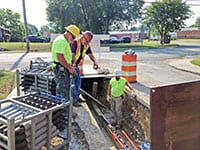 The City of Monroe, North Carolina, is located approximately 25 miles southeast of the state’s largest city, Charlotte. Currently, the city of 34,000 people has approximately 1.6 million feet of water mains ranging in age from the 1930’s to the present day. Cast iron pipe is the oldest type of pipe in the water system and is reaching the end of its useful life. Based on the city’s GIS analysis, there is approximately 160,000 feet of cast iron pipe in the system. After evaluating its current rehabilitation program, which replaces approximately 8,000 feet of water main a year, Water Resources Director Russ Colbath identified a significant gap in the program in terms of replacing the aging infrastructure in a timely and effective manner.

He said, “Asset management is a very strong focus of the industry right now. Whether it’s roads, wastewater or water, managing existing assets is of high importance for one particular reason: infrastructure isn’t going to last forever. Beginning in 2010, our staff performed an annual gap analysis for funding water main replacements.

“To put things into perspective, with 1.6 million feet of water main in the ground if you were replacing 8,000 feet per year, each pipe would have to last 200 years. That’s not feasible. The gap analysis showed that we were not investing adequate resources to keep our water system viable, which will have significant long-term consequences.”

Realizing that a more aggressive and efficient program would need to be established, Colbath and staff analyzed several options for increasing water main replacement quantities to close the gap, while keeping costs and water rates low. Contracting for additional replacement and/or adding more city staff and equipment to increase production are costly options. Staff then became aware of a public water system, Consolidated Mutual Water Company (CMW), near Denver, Colorado, that was having great success utilizing static pipe bursting for their replacement program.

Colbath said, “We were looking for a way to accelerate some of the replacement programs for replacing that pipe. So when we saw the Consolidated Mutual presentation at one of the major water works conferences, we focused on applying the pipe bursting technology to the water main replacement program here. CMW was using pipe bursting and internal crews of 11 to 12 people to burst and replace up to 30,000 feet of water main per year. This was significant considering how hard we have worked on our current dig and replacement program to achieve 8,000 feet per year.” 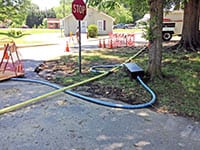 The city of Monroe, NC uses a yellowmine restrained pipe system for the temporary water main bypass on its pipe bursting projects. This allows the city to maintain water service to customers throughout the entire project.

The Consolidated Mutual Water Company, Lakewood, Colo., was established in 1926. Since that time, the number of water taps has increased from 136 to over 20,000. The utility maintains a network of pipeline totaling over 400 miles.

Faced with aging infrastructure, similar to the city of Monroe, Consolidated Mutual Water began a rehab and replacement program a little over five years ago to start replacing water mains that were reaching the end of their natural service life. The utility chose trenchless pipe bursting for its infrastructure improvement program.

Since 2010, CMW has developed an impressive pipe bursting program, bursting, replacing and upsizing almost 100,000 lf feet of 4-, 6-, and 8-inch cast iron water main to fusible PVC with a Grundoburst 800G static pipe bursting system from trenchless equipment manufacturer TT Technologies, Aurora, Ill. The pipe bursting program is a model of efficiency and is able to achieve high levels of production, which made them a good case study for the city of Monroe.

TT Technologies helped with the development of CMW’s pipe bursting program, in addition to now assisting Monroe with its program. TT Technologies Pipe Bursting Specialist Brian Hunter said, “The Consolidated Mutual Water program was a great program for the city of Monroe to model itself after. They have been achieving significant numbers in terms of pipe bursting and really helped get the Monroe program off the ground.”

Colbath said, “We were planning on spending a good amount of money on this program, so we needed to do our due diligence. I really wanted to see how Consolidated Mutual was making their program so successful. So I spent some time in Colorado with Zack Queen, who runs their program. When I was getting ready to leave, I asked Zack what he thought about coming out and spending a week with us to get our program started on the right foot. When I got back, we were able to figure out a way to bring Zack in for a week and pay him to provide direct insight to our program. It was extremely beneficial.” 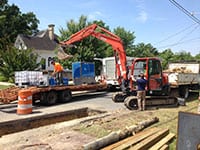 Monroe’s pipe bursting program consists of nine field personnel that make up (2) four-person crews and a field supervisor. According to Colbath, the field crews are cross-trained in all pipe bursting functions with the exception of pipe fusing. Currently three of the field personnel are certified for fusing the PVC pipe. In the office, the city dedicates the time of approximately one and a half full time equivalent engineer man-hours to drive the engineering, GIS systems and project planning.

Colbath said, “We made a business case for a ten-year program to replace all of the cast iron pipe in the system. That puts us at an average of 16,000 feet per year. We don’t burst throughout the entire year; but focus on maximizing pipe bursting production during non-freezing temperatures. This avoids problems with temporary top-of-ground water by-pass lines. Significant engineering work also goes in to the planning, construction drawing preparation, customer coordination, traffic control determination, etc. This, in addition to issuing press releases, field troubleshooting, and GIS edits and record drawing preparation, make up the engineering portion of the program.”

Monroe is replacing 6-inch and 8-inch cast iron water mains with 6- and 8-inch fusible PVC from pipe manufacturer Underground Solutions, Inc. (UGSI), Poway, Calif. Like CMW, Monroe is using a Grundoburst 800G static pipe bursting system. Hunter said, “The 800G is a versatile bursting system that is well-sized for the types of pipe and soil conditions that Monroe crews encounter. It gives them plenty of bursting power, but it’s also compact enough that it can be transported from job site to site easily.”

With the Grundoburst, crews are able to burst and replace a total of 16,000 feet of cast iron pipe during the first year, the program’s annual goal.

After a section of pipe is identified as a target, engineering and project plans are drawn up. The city contacts residents and informs them of the work that will be done in their areas at least one week before the project starts. Typical projects range in length from a single 250-foot bursting run up to a 1,700-foot section of pipe, consisting of three to four bursting runs. All of that depends on the street configuration and pipe layout.

Colbath said, “Really, the skill in this program is looking at an area and devising your work sequence and strategy. Where are the pull pits are going to be? Where are the insertion pits going to be? How do I valve off the area? How do I make a safe working area with proper traffic control and isolated with retrained valves? How do I effectively get the customers tied over to the temporary water main bypass system, then back to the new main once it is certified? These are the challenges faced on completing each project.”

In order to ensure a high level of customer service, crews install a yellowmine restrained pipe system for the temporary water main bypass. This allows the city to maintain water service to customers throughout the entire project, especially if the project goes beyond the anticipated time frame.

Hunter said, “The Monroe crews really came up to speed quickly with the static pipe bursting system. They are very detail-oriented and customer-centric. They are positioned well for a lot of success with the program that they have created.” 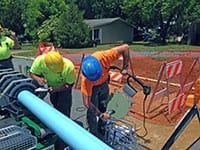 With a year in the books now, the city of Monroe has had a successful season of pipe bursting. Colbath explained that project costing reveals a lot about the potential that this program has for the city.

He said, “Whether we do an open cut project or a pipe bursting project, we do a cost analysis, which includes labor, equipment and materials. Right now on the bursting projects, we are achieving $58 to $59 per linear foot on some street segments, and low $70 per linear foot on other streets. Compared to our open cut projects, which are regularly in the upper $70 per liner foot range to $90 per linear foot, you’re talking 20 percent to 25 percent savings. Now extrapolate that out over 160,000 feet and we’re talking millions of dollars in savings.”

Initial calculations put the city of Monroe’s first year total right around the 16,000-foot mark, the program’s annual goal. According to Colbath, as crews get more efficient, the projects are only going to get harder.

He said, “When you have 160,000 feet to replace, you select easier project areas at the start to train and develop staff expertise. But as we move forward, projects will become more difficult and complex. If we can sustain 16,000 feet per year as we get into the more difficult areas, I’ll be very pleased. There are a number of unforeseen challenges that may be encountered on any given project, such as a fitting or bend you didn’t anticipate, or something that wasn’t on the drawing, tree roots that stop the pipe incursion, etc. When these occur, you have to slow down, learn from what happened, and adjust your plans. There are still some extremely challenging areas left to tackle, and we are going to have to apply that learning to be successful.”