Crews needed to weld the new HDPE coated steel gas main together during pullback because there was not enough space to stage the entire length of pipe. Note the minimal excavation.

The recent expansion of natural gas service by German gas provider Municipal Works Lippstadt required the installation of two new gas mains in the cities of Benninghausen and Heringhausen, Germany. The new lines would serve both commercial and residential customers in the area. Because the installations needed to cross a local river, only trenchless installation was considered. Directional drilling was chosen for what was expected to be a routine drilling project. By the time the project was complete, however, it took added percussive power and rock drilling equipment to successfully cross the river.

The utility provider planned to pull in two, 6-inch HDPE pipes together with the new gas main in a three-pipe bundle. One would be used as a spare potable water line, the other as an accommodation pipe to be leased at some time in the future. To complete the installations, Municipal Works Lippstadt turned to trenchless equipment manufacturer Tracto-Technik, Lennestadt, Germany (known as TT Technologies in North America).

Because of numerous sub-utilities at the Herringhausen site, as well as a sheet piling on the riverside, determining the proper bore path was critical. Both river crossings would be approximately 395 feet in length. Several types of steel pipe were evaluated based on the minimal bending radius. A maximum cover of 23 feet was determined and a special HDPE coated 10.5-inch diameter steel gas pipe was chosen for the project.

Because local soil conditions were already well known from a crossing successfully completed in the past, the Municipal Works crew did not expected any soil problems with the project. The sand/clay soils were expected to remain consistent throughout each bore. Soil investigation at deeper levels was deemed unnecessary.

Drilling at the Herringhausen site began in August with a Grundodrill 20S from Tracto-Technik. 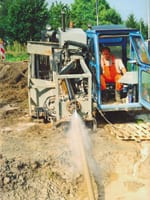 Standard directional drills use hydraulic thrust and rotational torque to complete their pilot bores. With the addition of water/bentonite slurry most small- to mid-range drills operate adequately in moderate soil conditions. But as soon as densely compacted or rocky soils are encountered, these drills reach their thrust force, rotational torque and flushing pressure capacities and cannot complete the bore. The same is true during extremely long bores.

The Grundodrill is a combination hydraulic/percussive steerable drilling system. According to TT Technologies’ President Chris Brahler, directional drills with percussion are relatively new to North America and promise to have a large impact on directional drilling industry here, like they have in Europe.

The percussive force is created by impacting the drill stem at the drill rig. This provides the dynamic energy needed to steer in difficult and rocky soils. The percussive impacts on the highly flexible drill stems can be adjusted at a rate up to 1,000 impacts per minute.

After a good start, progress slowed greatly at 100 feet into the bore at a depth of 16 feet. An obstacle, possibly a large boulder, seemed to be the reason. But this could not be confirmed. The percussive hammer was operating at full capacity and was able to keep the bore progressing. After a while it became evident that the crew was dealing with more than just rocky soil. They were unable to get past the obstacle and eventually there was hardly any detectable thrust.

Two 6-inch HDPE pipes were pulled back along with the new 10.5-inch steel gas main in a 3 pipe bundle. The 20-inch backreamer was specially designed for this project.

Thanks to good prep work, pullback was completed in less than three and half hours, including a 45 minute delay for welding on the second pipe string. Welding the pipe during operations was necessary because there was not enough space to totally lay out the pipe length completely at the beginning of the project.

After the pullback was complete, the new gas line was successfully pressure tested and readied for service. Everyone was very satisfied with the results of the project, especially considering the unexpected encounter with the large rock formation.