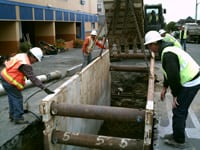 The city of Eureka, California is nestled in Humboldt County on California’s North Coast, home to the redwood forest and just a short drive north of San Francisco. People travel from throughout the United States to enjoy and take in the area’s many attractions and outdoor activities.

Eureka is home to approximately 27,000 residents. The city played a large role in the California gold rush of the 1850s as an access point to Humboldt Bay, California’s second largest natural bay. Despite its rich history, Eureka, like many cities and towns across America, is now battling an aging and deteriorating infrastructure that dates back, in some cases, over 100 years.

According to Deputy Public Works Director Bruce Young, “This sewer main is a major trunk line within the collection system and any associated blockage and overflow would have resulted in a large sewer spill in close proximity to Humboldt Bay, potentially causing environmental damage and disruption of shellfish harvesting, and would have exposed the City to fines and possible lawsuits as a result of the spill.” 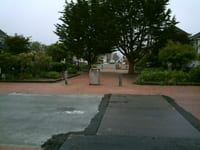 According to the City’s project engineer Angi Sorensen, minimal surface disruption was a driving factor in choosing trenchless pipe bursting. She said, “The section of main to be replaced is located between 4th and 2nd Streets, with 110 feet at the downstream end running under a pedestrian plaza. The on-street improvements include decorative bricks laid in a herringbone pattern, circular planters around two mature cypress trees (the source of the root intrusion), lighting, and underground conduits.” Trenchless pipe bursting would help keep surface disruption under control and save the cypress trees.

Pipe bursting was developed in Europe from the concepts found in pneumatic piercing tools. These tools have been widely used since the 1960s. TT Technologies pipe bursting specialist Collins Orton explained, “In the late 1970s German and British contractors tried using piercing tools to break cast iron pipe and pull in new pipe. In Europe at that time, there was a great need for trenchless pipe replacement, specifically for cast iron pipe in the gas industry. The results of those early experiments eventually evolved into pneumatic pipe bursting as we know it today.”

During pneumatic pipe bursting, the pipe bursting tool is guided through a fracturable host pipe by a constant tension winch. As the tool travels through the pipe, its percussive action effectively breaks apart the old pipe and displaces the fragments into the surrounding soil. 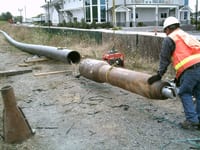 During pneumatic pipe bursting, the pipe bursting tool is guided through a fracturable host pipe by a constant tension winch. As the tool travels through the pipe, its percussive action effectively breaks apart the old pipe and displaces the fragments into the surrounding soil.

Depending on the specific situation, the tool is equipped with an expander that displaces the host pipe fragments and makes room for the new pipe. As the tool makes its way through the host pipe, it simultaneously pulls in the new pipe, usually HDPE.

With the use of expanders, one tool can be used to burst several different size host pipes and replace them with new HDPE of the same size or larger. Pipe bursting is the only trenchless method of rehabilitation and replacement that allows for the upsizing of the existing pipe.

Within two weeks of meeting with the City to discuss the project, Wahlund Construction had assembled a highly competent team that was ready to get to work. Munson Pump Services of Cottonwood, California, was responsible for constructing and operating a bypass to convey the wastewater flow around the project area. The bypass system included redundant pumps at the receiving pit, one pump at each of the two alleys within the project area, and traffic-rated ramps at 3rd Street. The sophisticated bypass operated continuously for more than three weeks, with 24-hour monitoring by MPS staff.

After the bypass was established, crews began preparing to burst the 600-foot section of sewer main. Launch and exit pits were dug on either side of the length of main; the launch pit was located at the north end of the run and the exit pit at the south. The exit pit measured approximately 8 feet wide, by 40 feet long by 14 feet deep, and a section of an 8-inch water main had to be removed to accommodate the trench box. A 10-foot section of the water main was also exposed at each of the two alleys where the alley mains were bypassed and the manholes were removed and replaced.

According to Sorensen, the initial plan was to break the project into separate runs, but TT Technologies’ technical support staff determined that the burst could be accomplished in a single run. The bursting head traveled at an average velocity of 6 feet per minute for most of the run, slowing to about a foot and a half per minute for the last 100 feet or so.

Big Burst in the Sunshine State PUCC Takes on a 36-inch Force Main in Talla...