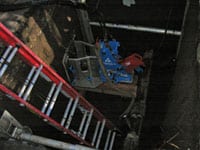 The city of Santa Rosa, California is facing the same problems that cities throughout the United States are facing; deteriorating infrastructure, specifically its wastewater collection system, and the need for more funds to be able to make needed repairs. The challenge at hand is how to upgrade and repair the system while remaining socially and fiscally responsible. At the city of Santa Rosa, Mark Powell, deputy director of local operations, is charged with much of that responsibility. Mr. Powell explained that the city has been actively working to mitigate the effects of inflow and infiltration for many years.

The department is committed to doing better. Santa Rosa is the biggest city north of San Francisco to the Oregon border and has very strict regulations. All agencies are under scrutiny regarding sanitary sewer overflows and inflow and infiltration and are working towards a solution. The department has been spending about $12 million a year on replacement and hopes to double that in the next five years.

The city, through an extensive main rehabilitation and replacement effort, replaces laterals in the public area from the city main back to the property line. In order to increase efficiency and maintain that fiscal responsibility, the city of Santa Rosa Utilities Department Director Miles Ferris, city engineers and operations staff, have researched and applied numerous construction technologies, including trenchless technology to facilitate the repair or replacements of aging pipe. The latest focus of their effort is sewer laterals and development of an in-house lateral bursting program (to save time and money), with the assistance of trenchless equipment manufacturer TT Technologies, Aurora, Illinois. 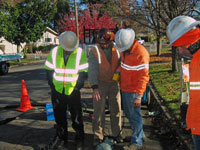 Use of the trenchless bursting applications helps the city remain socially and fiscally responsible to its residents.

Inflow and Infiltration is a two-headed monster for many municipalities, including the city of Santa Rosa. It’s I&I crews operate two camera trucks every day and do smoke and dye testing. Inflow typically comes from a clean water source being illegally or improperly connected to or flowing to the wastewater collection system. According to Santa Rosa’s published report on I&I, the city inflow problems stem from a variety of conditions such as leaky manhole covers and uncovered cleanouts, private property rain downspouts or sump pumps, and yard and foundation drains that are illegally connected to the sanitary sewer system.

Infiltration, on the other hand is primarily a seepage issue. Groundwater is the culprit here, infiltrating into the collection system through cracked, collapsed and just plain leaking pipes. Depending on the system, this can be caused by any number of problems including age of pipe, pipe joint material, tree roots, cracked or deteriorating pipes, or even seismic activity, which is partially to blame for some of the problems the city of Santa Rosa is having.

The problem with excessive amounts of rainwater entering a treatment system is two-fold: pumping costs and the tertiary treatment plant process. In the case of the city of Santa Rosa, estimated costs to the city $7.50 per thousand gallons per day to treat and dispose of the reclaimed water. When your system treats 20 MGD (million gallons per day), the number can be significant. Granted, the city is not always dealing with excessive infiltration, but there are instances when it can be tracked.

A cited example from the city of Santa Rosa shows that in December 2002, after seven days of rain, one of which included over 4 inches, flows through the treatment facility peaked at 60 MG (millions gallons). The average daily flow in September of that year was 16.2-18 MGD.

The makeup of the city’s infrastructure provides perspective on the issue. 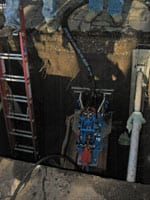 A majority of the city’s sewer collection system is comprised of VCP pipe that has deteriorated because of age, tree root intrusion and seismic activity.

The wastewater collection system for the city of Santa Rosa consists of over 520 miles of pipe ranging in size from 4 inches through 66 inches in diameter. The older areas of Santa Rosa typically have sewer mains constructed of vitrified clay pipe (VCP) installed throughout the 1970’s. Some VCP installed during that era is fairly brittle. That, combined with ground movement due to seismic activity, has promoted joint separation and cracks in the pipe. Root intrusion is also a problem, compromising the integrity of mains and laterals.

The city’s engineering and CIP team initiated a program of replacing the VCP sewer mains in town through a wide range of application including CIPP, static and pneumatic pipe bursting and open cut construction where appropriate. The city has an educational and legal approach, enforcing city codes that prohibit connection of roof downspouts, areaway drains, foundation drains, or other sources of surface water runoff or groundwater to a building, sewer or sewer service lateral, which in turn is connected, directly or indirectly, to a public sanitary sewer. But whether it’s a physical repair or replacement or an educational effort, having the qualified, trained staff for the job ultimately leads to success.

Developing The Right Team For The Job

The success the city has had in battling I&I issues is attributed directly to all the Utilities Department staff involved and sound educational practices. Mr. Powell stated, “The keys to success include several important components. First, is a director who is proactive and very involved and second, is the quality of staff. And third, our Board of Public Utilities (BPU) who understands what our business is and we take the time to educate them. We provide new board members a two-day training course. That education is very important and our entire Board of Public Utilities has appreciated it.

Powell said, “There is a classroom program where we go through the organization, how budgets are developed and a field portion where we take them to the field and they see first-hand what happens. When we’re talking pipe bursting, for example, ‘What is it? This is what it does, and show them why it’s a money saver.’ They get the full realm of what they are governing over. But ultimately, I can’t say enough about our director and staff, and the quality job they do. And that goes from the employee at the call center to the person in the field.”

The final component of a successful team is the customer, the general public. The city works to involve them in the process through an outreach program. The program focuses, again, on education and topics like water conservation, FOG, pharmaceutical take-back, and inflow issues. The department utilizes everything from bill stuffers to a booth at the local farmers’ market, to the Water Fair to make contact and educate the community about issues regarding water and wastewater. Another such issue that directly affects homeowners is the city’s lateral replacement program. 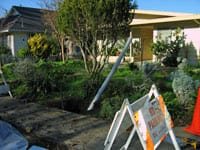 While the lateral line is ultimately the residents’ responsibility, city crews are replacing the lower portion of the lateral that runs from the end of the side walk to the sewer main for free.

The push to begin lateral replacement began long before the city actually purchased equipment and began bursting. Powell said, “The bursting program was in the works for over two years before we purchased the unit. We budgeted for it and we demo-ed different machines prior to going to bid, so we knew what the process was and how each machined functioned. We wanted local support, in addition to the items the crews needed to do their jobs better.” The city ultimately purchased a Grundotugger lateral pipe bursting system from TT Technologies.

Powell continued, “The laterals are maintained by the property owner. But, at our discretion, and as a service to our customers, we will repair or replace the portion of the lateral in the public right-of-way (back of the sidewalk to the main in the street) at no charge to the homeowner. With the costs associated with trenching, backfill and patching, we purchased a pipe bursting unit so we didn’t have to cut and cover.”

The city’s asset management team incorporates a ranking system that looks at condition (age, material, inspection data, service requests), performance (future and existing hydraulic capacity, design standards, flow characteristics) and risk (proximity to sensitive areas such as highways and creeks, absence of redundancy for backup, imminent major failure mode) for each segment of its sewer system in order to develop a priority schedule for replacement. In addition, the locations of upcoming road projects and redevelopment areas are taken into consideration for determining which sections will be replaced or repaired next. Once determined for replacement, the job is assigned to the field crews or the CIP team.

According to Powell, all of the city’s operational staff is cross-trained. He said, “They do water and wastewater. If they go to a job and there’s a water line in the sewer trench and it needs to be replaced, they do that too. Basically, we have three general repair crews and two leak crews. We also have a weekend crew, as our operations run seven days a week, nine hours a day, 6:30 in the morning until 4:00 pm.”

For lateral bursting, crews first identify launch and exit pits for the project. Pit sizes typically measure 5 feet by 5 feet. Once the pits are excavated, crews place the winch line through the existing lateral. At the launch pit side, the expander is connected to the first segment of new pipe, in this case High Density Polyethylene pipe (HDPE). The expander and pipe are then connected to the winch line.

At the exit pit, the winch line is connected to the hydraulic bursting unit. Once the hydraulic power pack connections are made, the bursting can begin. Crews can choose to fusion together the entire length of HDPE at once, or fuse together segments during bursting operations. During the lateral bursting process, the expander, which is larger in diameter than the existing lateral, is pulled through the host pipe, breaking it apart and forcing the fragments into the surrounding soil. The new HDPE pipe is pulled into place simultaneously.

While ultimately the Santa Rosa homeowner’s are responsible for the portion of the lateral that resides on their property, Powell knows that replacing the portion in the public right of way is helping mitigate the effects of I&I, while providing outstanding customer service. Being able to replace those laterals through trenchless pipe bursting keeps everyone happy and saves time and money.

Side Bar Beyond Wastewater 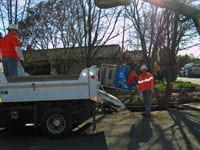 The city of Santa Rosa, along with the other partnering entities in the Subregional treatment facility, is part of a growing trend in wastewater management, and reclaimed water. The Santa Rosa Sub-Regional Water Reuse Plant is considered one of the best water reclamation facilities in the United States and its treatment process is ranked in the top five percent in the world for the treatment technology utilized.

According to the city’s Web site, the resulting recycled water is used in a wide variety of applications, including agricultural irrigation, irrigation for golf courses and playgrounds, decorative landscape features such as fountains and fire suppression systems. Powell explained, “Our treatment facility treats to tertiary standards and we also have quite an extensive reclamation program. We utilize reclaimed water for irrigation and for farming, as well as the Geysers geo-thermal field. We send, on average, about 12 million gallons per day, through a 43-mile long pipeline up to The Geysers. They take the water and basically feed it back on the lava beds to create steam and more electricity.”

The Geysers, which is operated by Calpine, Houston, Texas, is a cluster of geo-thermal plants along the Sonoma County and Lake County areas. According to its Web site, Calpine operates 19 of the 22 geo-thermal facilities in that area and generates enough energy through the geo-thermal operations to power 725,000 homes.