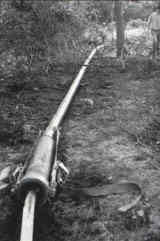 Nothing displays the benefits and capabilities of directional drilling better than a river crossing. While these crossings have become commonplace over the last 15 years, they still present distinct challenges for drill operators and equipment. Difficult soil conditions under river bottoms and hydrostatic pressure from the river itself can combine to create problems during drilling applications. The drill rig seizing during product pullback, a condition often referred to as hydrolock, is one potential problem. Utilizing a pipe ramming tool during pullback is how one Minnesota contractor solved this problem.

Hugo, Minnesota based Lessard-Nyren was recently contracted to install 600 feet of 6-inch pipe under the Sauk River on the Northern side of St. Cloud, MN. The first contractor failed to complete the pilot bore under the river in extremely rocky and sandy soil conditions. Lessard-Nyren accepted the challenge.

Using an Advantage 8000 directional drill rig with 80,000 lbs. of pullback, the Lessard-Nyren crew was able to complete a pilot bore under the river. On the other side, the crew attached a 14-inch back reamer and attempted to pull back 6-inch HDPE SDR 11. Once in place, the pipe would house 3 innerducts for fiber optic cable.

The crew pulled the HDPE approximately 400 feet before it seized in the rocky soil. The Advantage rig was powerful enough to pull the SDR 11 pipe apart. Crew supervisor Greg Jungwirth re-evaluated the job and decided to employ a different strategy. Jungwirth believed the crossing could be completed using a pneumatic pipe ramming tool to assist during product pullback. He turned to Mike Tjader and pipe ramming tool manufacturer TT Technologies, Aurora, Illinois, for technical support.

Tjader explains, “Seized drill stems or product pipe can often be freed by using a pipe ramming tool. The tool is attached to the end of the product pipe and when pullback slows or stops, the tool is started. The percussive action of the rammer helps move the pipe through the difficult section.”

The Lessard-Nyren crew completed a second pilot bore parallel to the first. Again a 14-inch back reamer was attached and pullback began. This time the crew pulled 5-inch steel pipe and used a Grundoram Hercules pipe ramming tool from TT Technologies.

The crew was able to pull the 5-inch steel pipe to within 200-ft of shore before the reamer wore out. Tjader said, “We tried to coordinate tapping with the rammer and pulling with the drill, but the reamer wasn’t cutting anymore. We decided to try and remove the pipe.”

Using the Grundoram Hercules, the crew rammed the pipe forward until they broke free of the drill. The rammer was then reversed and removed about 100 feet of the pipe. According to Tjader, the crew then attached a bracket to the pipe and pulled the remaining 300 feet out with a backhoe. Without the pipe attached, the crew was eventually able to complete the bore with the worn out reamer.

Using a different reamer, the Lessard Nyren crew set out for a third attempt. Tjader said, “In order to avoid damage to the product pipe, we decided to set a pull limit of 40,000 lbs. When we reached that level, we would start the pipe ramming tool to help with the pullback.”

The crew followed the last bore path. Once on the other side, they attached a new 15-inch reamer and began pulling back the 5-inch steel pipe. Tjader said, “We got about half way through the 600-ft run before the pulling tension reached 40,000 lbs. We started the Hercules and tapped on the pipe. We ran the hammer at 35% power for about 4 feet, until the pipe loosened up. We continued that way for the last several hundred feet, until completing the pullback.”

The crew was extremely pleased by the results. Tjader said, “I guess third time’s a charm. It was a tough job. It took a lot of patience and know-how on Lessard-Nyren’s part. A little help from the pipe rammer didn’t hurt either.”