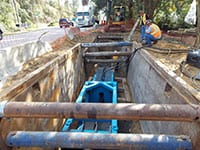 In 2007, the U.S. Environmental Protection Agency issued a Special Order of Consent (SOC) with the state of North Carolina regarding a series of sanitary sewer overflows that occurred in the city of Wilmington. That SOC led to several challenging pipe bursting projects facilitated by trenchless contractor KRG Utility, Inc., Lenoir, NC.

According to the Cape Fear Public Utility Authority website, the consent decree process began in 2007, following a number of sanitary sewer overflows in the City of Wilmington and New Hanover County’s wastewater systems. The consent decree allows CFPUA to avoid litigation over past overflows while receiving acknowledgment for its current short- and long-term plans that are already reducing the number and size of sanitary sewer overflows.

State Utility Contractors, Inc., Monroe, NC, was awarded the bid and subcontracted with KRG Utility, Inc. for the pipe bursting portion of the project.

KRG Utility is a family-owned and operated company. Since 1978, it has been one of the leading sewer and water rehabilitation service companies in North Carolina, South Carolina and Virginia. KRG Utility offers a range of trenchless methods, including pipe bursting, sliplining and pipe video inspections.

The company is regarded as one of the top pipe bursting contractors on the East Coast and owns and operates a range of pneumatic pipe bursting tools, including several mid-sized reversible tools and some larger diameter rear expander configured tools. Since working on the NEI Phase 1 project in 2008, the company has added several static bursting machines to its arsenal as well.

KRG Utility President Jeff Greene said, “The project in 2008 really set the stage for pipe bursting to be chosen for the remainder of the NEI project. We were able to get through a very difficult situation in 2008 through static pipe bursting, and it just made sense to continue on that path for the second phase of the project.”

Phase 1 of the NEI project took place in 2008. Much of the existing force main sewer was rehabilitated through a lining process at that time. However, one particular section of main had been lined three times. Each time it failed to maintain pressure under testing. After attempting to cut out the three liners from almost 500 feet of sewer main, the lining contractor was instructed to find another solution to the problem. KRG Utility was called in to determine the possibility of replacing the existing main with High Density Polyethylene pipe (HDPE) through static pipe bursting.

Crews utilized the Grundoburst 2500G with over 300 tons of pulling power to burst the 500 feet of 20-inch ductile iron force main with the three high-pressure liners still inside and replace it with 22-inch diameter HDPE. KRG Utility worked with TT Technologies to complete the extremely challenging burst successfully.

Fast forward to 2015 and Phase 2 of the interceptor project is ready to begin, and this time the project specifications call for the pipe replacement to be completed through pipe bursting. KRG Utility was ultimately subcontracted to perform the bursting operations on the remaining 5,140 linear feet of ductile iron force main. Also specified for the project is 20-inch DR 18 Fusible PVC host pipe from pipe manufacturer Underground Solutions, Inc. (UGSI), Poway, CA.

TT Technologies pipe bursting specialist Brian Hunter said, “We’ve seen the static pipe bursting process continue to gain momentum in the industry. It’s matured. It’s become more versatile now that great progress has been made in using various product pipe materials such as ductile iron, fusible PVC, and HDPE. The water and sewer industry have been using this type of PVC pipe for several years now. It is butt fusion welded and is well suited for many trenchless applications, including pipe bursting with static pipe bursting equipment.

“But, as this project demonstrates, the capability of the method to take on difficult host pipe materials is also a reason that static pipe bursting has become a sought after rehab and replacement method.” 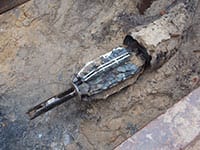 Over 5,000 feet of ductile iron pipe was burst on the project. A specially designed cutter configuration from TT Technologies was used to split the host pipe.

For a typical burst run on the NEI Phase 2 project, the general contractor prepared the launch and exit pits. KRG Utility crews then placed the bursting unit in the exit pit and would rod the host pipe with the quick lock bursting from the exit pit to the launch pit. At the launch pit, the splitter head configuration was attached to the fusible PVC. The fusible PVC came in 45-foot sections and was fused together for the bursting runs at the launch pit. Launch and exit pits were approximately 30 feet long and 8 to 10 feet deep.

KRG Utility crews divided the job in a way that they could position the bursting unit in the middle of two runs. That way, after the first burst was completed, crews simply lifted the bursting unit, turned it 180 degrees and set it back in the pit and it was ready to begin the next bursting run.

Hunter said, “Positioning the bursting unit in the middle of two runs is a great time-saving tactic. Also, this time around, KRG Utility utilized a Grundoburst 1900G for the project. It’s a smaller unit than the 2500G used in 2008, but operates in an identical manner. Without a liner to cut through on this project, we didn’t feel that the larger static bursting unit was necessary.”

Greene said, “The project was divided into five sections with the largest section being 2,000 feet, while the rest of the four sections made up the remaining 3,000 feet or so. Most of the runs were completed along city roads, along with one section of DOT-maintained road. Traffic was a significant issue throughout the project, as well as existing utilities. It’s one of the parts of this project that made trenchless pipe bursting an attractive option, instead of open cut. We had fiber optic lines, cable lines, phone lines; it was a lot to deal with. State Utility Contractors did a great job addressing both traffic and existing utility issues throughout the project.” 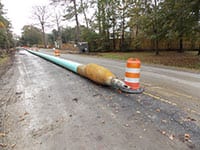 The bursting head and expander sit, prepped and waiting to be attached to the cutter head configuration. KRG Utility’s longest burst on the NEI Phase 2 project was a 900 feet.

KRG Utility performed a total of nine bursts, with an average burst length of 450 feet. The longest bursting run for the project came in at approximately 900 feet. Greene said, “We got more aggressive with bursting runs as the project went on. We had a few 350- to 400-foot bursts, but then we pushed that to 700 to 750 feet. Then we did a 900-foot burst. We were able to complete that burst in about three hours. We set it up the night before, then came in the next morning and completed the bursting run. That helped the project in two ways. It reduced the overall number of pits that needed to be dug and it moved the project along faster.”

Once the bursting was complete, KRG Utility turned over the project to State Utility Contractors to complete the tie-in of the sewer force main.

Hunter said, “This project was a significant step in meeting the requirements of the consent degree. Jeff [Greene] and his crew at KRG Utility did a great job with the bursting in some difficult work conditions.”