The 250-ft casing installation took place under one of only two roads leading to the Los Alamos National Laboratory. Traffic disruption was avoided through the use of trenchless pipe ramming.

The Cerro Grande fire ravaged the Los Alamos, New Mexico landscape in May of 2000. In addition to threatening the world famous Los Alamos National Laboratory, the firestorm consumed over 47,650 acres of forest and left over 400 families homeless. Almost as soon as the fire was contained a new threat arose–flooding.

The massive fire left the mountainous region vulnerable to excessive water run-off. The threat of massive summer flooding prompted the Los Alamos National Laboratory and local communities to take steps to help mitigate the potential disaster. New drainage pipes had to be installed to help route the expected run-off.

The first project called for the installation of a 250-foot, 36-inch steel drainage casing under a roadway near the lab. The area’s sediment rich soil was not going to make the job easy. Boring contractor DH Underground, Albuquerque, NM, was contracted for the project. To perform the work DH Underground partners John Theiler and Mark DeVaney ultimately chose the Grundoram Pipe Ramming System from trenchless equipment manufacturer TT Technologies, Aurora, IL.

Theiler said, “We anticipated a simple trenchless auger boring project, but plans changed dramatically once we encountered the soil conditions. We decided on pneumatic pipe ramming instead, another trenchless casing installation method that would allow us to place the drainage pipe without open cutting the road.” The road was one of only two roads that traveled to and from the National Laboratory.

Ironically, the Cerro Grande fire was a result of a controlled burn designed to help prevent just such an incident. While the Laboratory basically escaped unscathed, the area’s watershed and natural erosion controls were not as lucky. The firestorm destroyed thousands of acres of forest. The underbrush in that forest slows water run-off.

In addition, the intense heat of the fire transformed the soil. The charred soil became unable to readily absorb water. For an area that averages over 8 1/2 inches of rain from July through September, these conditions signaled potential disaster.

Efforts to reduce the impact of potential flooding began almost immediately. US Forest service workers cut down charred trees to help divert run-off. Prison inmates were used to till the scorched soil and volunteers planted rye, barley and other vegetation to help soak up rainwater and begin the restoration process.

The National Laboratory took steps as well, identifying drainage routes and contracting to have drainage casings installed and replaced. Theiler said, “After the fire, local representatives sought out roadways that experienced excessive water run-off and designated them for drainage casings. Our particular job took place under a roadway just a few blocks from National Laboratory and about a mile and a half from the fire itself. When installed, the new casing would channel the water under the road and on its way down the mountain.”

According to Theiler the 250-foot installation was intended to be an easy auger bore through drillable volcanic ash type soil. After digging a test hole it became apparent that auger boring was not going to work. Theiler said, “We could barely dig through the ground with a 90,000-lb. track-hoe. The soil was a densely compacted cobble conglomerate with large boulders, some as large as 24 inches in diameter. We found that out later.”

The original project specification called for 250 feet of 36-inch .375-inch wall casing. When it became apparent that augering wasn’t going to work, Theiler and DeVaney decided to try pipe ramming instead. He turned to TT Technologies Pipe Ramming Specialist Rick Melvin for technical support and put in a change order for a thicker walled casing to accommodate pipe ramming.

Trenchless pipe installation through ramming is simple; a pneumatic hammer is attached to the rear of the casing or pipe. The ramming tool, which is basically an encased piston, drives the pipe through the ground with repeated percussive blows.

According to Melvin, several options are available for ramming various lengths of pipe. He said, “An entire length of pipe can be installed at once or, for longer runs, one section at a time can be installed. In that case the ramming tool is removed after each section is in place and a new section is welded on to the end of the newly installed section. The ramming tool is connected to the new section and ramming continues. Depending on the size of the installation, spoil from inside the casing can be removed with compressed air, water, an augering system or with a mini backhoe.”

Ramming tools are capable of installing 4- through 80-inch diameter pipe and steel casings. Diameters up to 148 inches have been successfully installed using large scale ramming equipment. Ramming requires minimal working depths and is proven effective for horizontal, vertical, and angled applications. Ramming is also ideal for installations under roads and rail lines because it displaces the soil without creating voids or slumps.

The conditions at Los Alamos would put the pipe ramming method to the test.

Over the 250-foot run, the DH Underground crew needed to maintain a 0.01/10 lf grade and line. The crew dug a 60-ft long launch pit to accommodate the ramming equipment and the 40-ft long sections of casing. Theiler said, “After the pit was dug, we moved the first casing section into position. We checked line and grade using surveyor’s equipment and water levels.” Once the casing was in position, the DH crew began assembling the ramming gear to connect the 18-inch diameter Grundoram Goliath pipe ramming tool with the 36-inch diameter casing.

The Grundoram Goliath weighs approximately 5,400 lbs. and operates at 1,236 cfm. At full force, the Goliath’s piston moves at 180 strokes per minute. A pneumatically powered adjustable bearing stand was used to raise the tool to the required height for ramming.

In order to connect the ramming tool with the casing, a series of tapered and segmented cones are used. The configuration for the Los Alamos lab included a segmented ram cone as well as a soil removal cone. 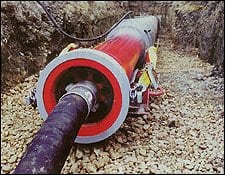 Once the connection between tool and casing was complete, the crew was ready to begin ramming. Theiler said, “We encountered some giant boulders about 60 feet into the run, which had to be removed before ramming really got under way. After they were out of the way, the first sections of casing went in at an incredible rate. We welded the next section on and continued without a problem. We were able to swallow up all the remaining boulders in our path.”

The DH crew pumped approximately 100 gallons of bentonite and water per 40-foot casing section. Once a section was installed, welds between casings took anywhere from 3 1/2 to 4 hours to complete. Ramming times averaged 1 foot every seven minutes in the beginning of the run and slowed to 1 foot every 20 minutes at the end of the run.

Once the 250-foot casing was in place, the DH crew began removing the spoil with its auger system. Theiler said, “We went in there with a lead auger of 24 inches and removed as much as we could. After that, we went in with a 30-inch and removed more. Then we finished up with our 36-inch auger.”

Overall, Theiler was impressed by the equipment performance. He said, “It was unreal. We could barely dig through the ground with our track-hoe. These were some incredibly difficult soil conditions. We were extremely pleased when the last section of pipe was in the ground.” Theiler anticipates more pipe ramming work in the Los Alamos area. He is also making plans for a 72-inch ram later this spring.