After being field tested and developed in Europe by Tracto Technik, the Grundoburst was recently launched in North America at the UCT show in Houston, Texas by TT Technologies, U.S.A. The hydraulic pipe bursting system, which has the ability to split ductile iron and steel lines, has already been involved in several high profile jobs in the United States and the potential for more work is great.

That is beginning to change with the recent introduction of the hydraulically powered Grundoburst static pipe bursting system. Developed and tested in Europe, the Grundoburst gives contractors the ability to split and replace ductile iron, steel and lined pipes.

An above ground demonstration shows the ability of the Grundoburst’s specially designed bladed rollers to split ductile iron pipe. Because the rollers split the pipe instead of tearing it there are no shards or jagged edges to damage the product pipe. There is also less resistance making larger diameter pipe replaceable.

During the static bursting process, specially designed bladed rollers are pulled through an existing line by a hydraulically powered bursting unit. As the bladed rollers are pulled through, they split the host pipe. An expander attached to the rollers forces the fragmented pipe into the surrounding soil while simultaneously pulling in the new pipe.

The bladed roller configuration is an essential part of the Grundoburst’s success. The specially designed bladed rollers actually split the host pipe instead of ripping or tearing it. This is a clean process and prevents potential damage to the product pipe.

Patented Quicklock bursting rods are easily and securely linked together, not screwed together like traditional drill stems or other static systems. This system speeds the installation process as well as the breakdown procedure. The rods can be quickly removed one at a time at the exit pit as bursting is in operation.

For longer lengths of pipe or runs with slight bends, the project can be divided. A 1,000-foot (304-m) run for example, can be divided into two 500-foot (152-m) sections with the Grundoburst placed in the middle. While one section is being burst, the Quicklock bursting rods are pulled from the first section through the Grundoburst and fed into the next 500-foot (152-m) section. That way, as the first section is completed, the next bursting run can begin almost immediately.

According to TT Technologies Pipe Bursting Specialist Collins Orton, bursting steel as well as ductile iron is a significant advancement in trenchless pipe replacement. He said, “I see this technology having a great impact on the gas and water industries. There are miles of steel and ductile iron lines throughout North America that are undersized and/or deteriorating and need to be replaced. Some are even required by legislation to be replaced. Being able to replace and upsize these lines without digging them up is a benefit to everyone.”

The existing 330-foot (100-m) steel water main was being replaced as part of a water tank rehabilitation project. Because the line ran through a section of national forest, open cutting was not an option. Pipe bursting was the method of choice for this particular project. Because traditional pneumatic pipe bursting has been largely unsuccessful in bursting ductile and steel pipe, ARB Rehabilitation Manager Dave Arthurs turned to the hydraulically powered Grundoburst 1000G, the largest of three Grundoburst models.

For the STPUD project the ARB crew dug a 5-foot (1.5-m) by 15-foot (4.5-m) launch at the beginning of the run and another 5-foot (1.5-m) by 20-foot (6-m) exit pit 330 feet (100 m) away. The bursting unit was positioned in the exit pit and connected to a hydraulic power pack. The crew then began inserting the Quicklock bursting rods through the host pipe and into the launch pit. A flexible guide rod attached to the front of the first rod was used to help ensure the smooth installation of Quicklock rods.

Once at the launch pit, the ARB crew removed the guide rod and attached the bladed cutting wheels, bursting head, expander and new HDPE. The entire configuration was then pulled back through the host pipe by the hydraulic bursting unit. The 8-inch (203-mm) HDPE was installed without incident in approximately 45 minutes.

After the HDPE was in place, the ARB crew removed the bursting equipment. The new main was then chlorinated, tested and put into service.

Arthurs said, “Our crew was very impressed by how easy the machine was to operate. They were even more impressed that we were able to split steel pipe. We have done an extensive amount of pneumatic pipe bursting but never with a static system. This was our first attempt bursting steel pipe. Overall, we were very pleased with the results of the project.” 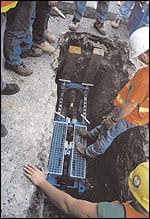 According to TT Technologies Pipe Bursting Specialist Jim Moore, there are major gas line rehabilitation and replacement projects underway in that part of the country. Moore said, “Hundreds of thousands of feet a year are being replaced a year through a major remediation program that is regulated by the Washington State Utility Commission. Much of that work is bare steel and wrought iron pipe.”

For its first project with the Grundoburst Pilchuck Contractors burst a 4-inch (101 mm) diameter, 0.188 wall (3/16-inch, 4.76-mm) steel gas main and replaced it with 4-inch (101 mm) HDPE. The 120-foot (36.5-m) main ran under the highly traveled Des Moines Memorial Drive. The Pilchuck crew used the smallest Grundoburst model, the 400G, for the job. According to Pilchuck Vice President Bob Gray, working with the static system was very easy. He said, “The machine is pretty straight forward. Our crew caught on quickly.”

The Pilchuck crew dug a launch pit at the beginning of the run and an exit pit at the end. After the bursting rods were inserted through the host pipe, the bladed cutting wheels, bursting head and expander were attached, along with the 120 feet (36.5 m) of new 4-inch (101-mm) polyethylene pipe. A weak link was used to help ensure pipe integrity.

According to Gray, the new line was also pressurized during pullback. He said, “We pressurized the new HDPE to 100 PSI during pullback for two reasons. First, if there was a loss of pressure, we would know something happened to the pipe. Second, pressure testing of the new pipe was required. That testing lasts for four hours. In order to limit the amount of time residents were without service, we began pressure testing right away.”

The Pilchuck crew was able to complete the burst in less than two hours. The new 5/8-inch (15.875-mm) services were tied into the main using standard sidewall fusion couplings. 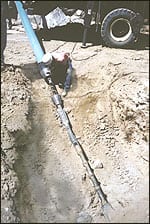 During the static process bursting rods are fed through the existing pipe. Then the bladed rollers, bursting head, expander and new pipe are pulled back by a hydraulically powered bursting unit.

Even before the Des Moines Memorial Drive project was finished, PSE approached Gray with another project. The new project, in Bellevue, Washington, called for the replacement of 800 feet (244 m) 4-inch (101-mm) steel gas main with 6-inch (152-mm) HDPE.

Gray explained, “The Bellevue project was done in conjunction with another project our telephone/communications division was performing in the same location. PSE wanted a gas main upsized in downtown Bellvue. Getting both projects done at the same time, during the night, meant less downtown disruption. Utilizing trenchless pipe splitting meant a tremendous saving in restoration and paving costs.”

The Pilchuck crew divided the 800-foot (244-m) run into four smaller runs so commercial service could be restored in a timely fashion. In addition, the city wanted to limit the amount of disruption downtown and imposed a 200-foot (61-m) construction zone limitation.

According to Gray the existing backfill proved to be the most difficult part of the Bellvue project. He said, “We ran into a lot of Controlled Density Fill (CDF). CDF is basically a really weak cement. It’s a flowable material that is able to fill gaps and voids. It’s becoming very popular in the Washington State area, especially for road restorations. We see it used a lot instead of standard crushed rock backfill. You can dig through it with a back-hoe, but not with a hand shovel.”

Despite the difficult backfill, the Pilchuck crew was able to burst and replace the 800-foot (244-m) steel main over four nights. As a result of pipe bursting the main, 65 feet (20 m) of asphalt restoration was required as opposed to 800 feet (244 m) if the project had been open cut.

Both Gray and Arthurs agree that the ductile iron and steel rehab market is sizable. Arthurs said, “I expect to do a lot of this work in the future. There is great potential on both sides, gas and water.”

Gray said, “We already have a sizable replacement contract that allows us to choose the method of installation. Splitting pipe is a great option to have. We can save a tremendous amount money in paving and restoration costs.” 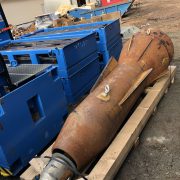