Through the use of trenchless boring with the piercing tool the crew was able to keep the only access road along the mountainside open and work at multiple job sites at the same time.

While trenchless construction methods like pipe bursting anddirectional drilling have taken center stage over the last few years, one method continues to prove its value everyday, in the field, without much fanfare-horizontal boring with pneumatic piercing tools. Piercing tools could easily be considered the genesis of modern pneumatic trenchless technology. Contractors around the world continue to achieve high rates of production and efficiency with them.

Ray Toney and Associates, Redding, CA, is a good example of a skilled and multi- facetted contractor getting the most out of a piercing tool. As part of the Cascade Flume Replacement Project in Nevada City, CA, the contractor was required to install over 5,700 total feet of 4-inch PVC drainage pipe along a narrow road in the Sierra Nevada Mountains.

The Cascade Canal is a key water source for Nevada Irrigation District. The canal feeds water to five water treatment plants that supply more than 20,000 customers in western Nevada County California. The Nevada Irrigation District, which manages the system, knew that it was only a matter of time before the aging concrete bench flume that carried the water would have to be replaced.

A flume is basically an above ground, open-channel that is used to carry or transport material, liquid or otherwise, from place to place. Some flumes accelerate flow through converging walls or an elevating bottom, or a combination of both. The Cascade Canal flume was gravity fed.

In March of 2000 the district put the project out for bid. Requirements included the demolition of the existing flume and the installation of more than 34,000 linear feet of 54-inch concrete pipe. In addition, the construction of a major temporary bypass was necessary.

Toney said, “The design of the project included installing a permanent concrete pipeline in the same location as the existing flume. But before work on the pipeline could begin, we needed to install the 4-inch subsurface drainage pipes along the right-of-way where the new pipe would be installed. That’s where the piercing tool came in.”

The Ray Toney & Associates crew used a 5-in. diameter Grundomat-P 130 to complete the 50- to 60-ft. pilot bores for the 4-in. diameter PVC drainage pipes. The drains will accommodate run off from snowmelt and rain and prevent erosion.

The entire length of the concrete bench flume paralleled a roadway. The roadway traveled up the mountainside to the headworks of the flume. The project required the new pipe to follow the same route as the existing flume. PVC drainage pipes were also required to be installed perpendicular to the new pipe, under the roadway, in predetermined locations. The 50-to 60-foot drains were designed to accommodate seasonal run off from snow and rain and protect against the erosion of the new pipe bedding.

Work on drainage pipe installation began in January 2001. Working during the winter months can be very challenging in some parts of the country; working during the winter months high in the Sierra Nevada mountains is beyond challenging. Kurmann said, “The job site was very remote. They had a limited right-of-way to work with and extremely tough soil conditions. They also had to deal with rain and snow. The conditions really put the crew and piercing tool to the test.”

With almost a century of history behind it, the tool was ready for the challenge.

The first patent for a piercing tool design was granted in the early 1900s, in Europe around the time of World War I. The original design called for a piston to propel the tool, and compressed air to drive the piston.

It wasn’t until the 1950s however that interest in piercing tool technology resurfaced in Poland and resulted in actual tools being built and tested. During the 1960s the technology emerged in Russia and Germany. In Poland the tool was referred to as Kret, Polish for mole. The earliest moles were often difficult to handle and hard to restart after stopping. Accuracy was also a problem.

Because accuracy was such a problem with most piercing tools, the technology was often disregarded and not allowed developed fully. The development of the reciprocating stepped-cone chisel-head assembly changed all that in the 1970s.

Kurmann explained, “The Grundomat piercing tool basically works on the same principles found in the first early piercing tools. A piston, inside a casing, drives the tool, and air drives the piston. The major improvement comes in the reciprocating head. The chisel head assembly moves independently of the main casing, creating a pilot bore for the rest of the tool body to follow. This ultimately leads to greater bore accuracy. The chisel like action helps the tool to power through difficult soils and obstructions without being pushed off course.” 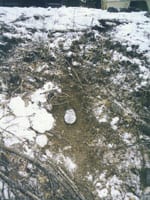 After creating the pilot bore with the piercing tool the 4-in. PVC was inserted manually. The Ray Toney crew averaged four to five complete drain installations per day.

Using the Grundomat helped the Toney crew overcome the difficult conditions in several ways. First was space. With limited right-of-way space to operate in, the crew needed a tool that would be effective in tight working conditions. The piercing tool was able to operate from small launch pits measuring on average 8 feet by 8 feet and 5 feet deep.

Second was limited disruption. The trenchless application allowed the road to remain open during operations. Toney said, “Keeping the road open improved our production. If we would have dug across the road in 95 different locations to install the PVC drains we would have been continually cutting off the only access along to the subsequent job sites. Keeping the road open meant we could work at multiple locations simultaneously without cutting ourselves off.”

Third was time savings. Like any other construction project, the Cascade Flume Replacement Project has an established timeline for completion. With work on the main pipeline scheduled for spring and summer, the installation of the PVC drains needed to be completed in a timely manner. Using the piercing tool helped the crew meet the aggressive time line.

Toney explained, “We averaged, over 95 locations, one hour per installation with theGrundomat. That was complete. I couldn’t justify digging a hole, which would probably take an hour, then installing the pipe, bedding it, back-filling it and meeting compaction requirements. We would have probably been able to do one every four to five hours under ideal conditions. And that wouldn’t have been possible here with the soil conditions. I figure production and time savings with the piercing tool was 4-to-1 over open cutting the project.”

Throughout the project, a three-man crew was used for all the drain installations. The crew consisted of a backhoe operator and two piercing tool operators. After digging the launch pit, the backhoe operator continued to the next site and dug the next pit while the other two crewmembers launched the tool.

When the bore was complete, the backhoe operator returned to help retrieve the Grundomat and remove the hose. The PVC pipe was inserted manually into the pilot bore at the point where the tool existed. Toney said, “We were able to manually install 90% of the drains. Some were tougher than others. On the difficult installations we used a sling and the backhoe to help pull/push them in.”

The Future Of Piercing Tools 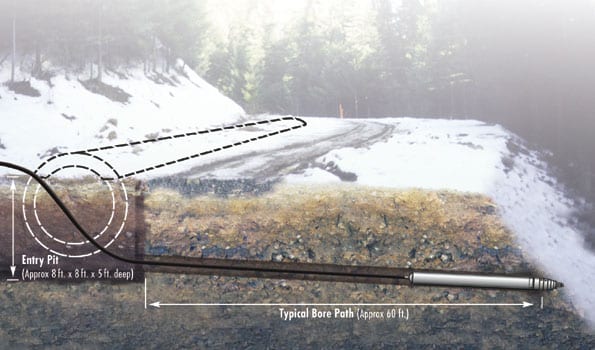 The project required the 4-in. PVC drainage pipes to be installed perpendicular to the new 54-in. diameter concrete watermain, under a roadway. Over the 95 installations, bore times with the Grundomat averaged one per hour.

Innovative Ramming: Genseed Rams I-Beams Instead of Pipe in England
Scroll to top