The near completed view of the 82 total I-beams installed

As part of a road improvement project for Kent County Council, England, trenchless contractor Genseed Underground Services Ltd. of Chelmsford, Essex was contracted to install 82 I-beams varying in size from 775 mm to 975 mm by 460 mm by 15 m (2.5 to 3 feet by 1.5 feet by 50 feet) in length in order to create the roof and side wall structures for a railway underpass at Northfleet in Kent.

The temporary structure involved sheet piling both sides of a 10-m (32-foot) high railway embankment that supported a 13.5-m (44-foot) section of track. The original plan called for the installation 27 tie bars through directional drilling from sheet pile to sheet pile, a total distance of 14 m (45 feet). Thirteen of these tie bars would be used to secure the sheet piles and the embankment while the tunnel was dug. Fourteen would be used, again at different levels, for the reaction frame for hydraulic jacking.

The overall jobsite view where the underpass road would evently be excavated.

Genseed Underground Services Ltd. was contracted by the main contractor, Christiani & Nielsen Ltd., to install the tie bars through directional drilling and install the I-beams through hydraulic jacking.

After looking at drawings and making an initial site visit, Genseed suggested ramming rather than jacking the interlocking I-beams. It is believed that this was the first time in the UK that this method has been used on such a project. Extensive research was carried out to anticipate and overcome any technical problems that could possibly arise.

Genseed contacted TT Technologies UK in Bedford for technical support. After consultations, it was decided that a 350 mm (14-inch) diameter Grundoram Koloss pipe rammer was best suited for the project.

The first five tie bars used to retain the top of the sheet piles were installed at 1. 4 m (4.5 feet) below the track‘s running level. This was completed in two days, after which another 1.6 m (5 feet) of earth was removed and a level platform was created for ramming the I-beams. The first two beams were positioned, on line and grade. This was critical because the line and grade of all subsequent beams were dependent upon the first two. Entry and exit holes were cut into both sheet pile walls and the ramming commenced. The first two beams took approximately one hour to ram with line and grade well within specification.

At the start of the third beam, it became apparent that there was a problem. Ramming on the flange of a steel beam rather than a standard casing was creating some serious recoil problems. The ratchet straps were unable to mitigate the recoil force of the hammer. The Genseed crew fabricated a special ramming plate with a tapered hole for the nose of the rammer and special fittings for the plate to the beam. The plate helped overcome the problem of keeping the rammer in contact with the beams and ensured maximum energy transfer. Subsequent beams were installed in approximately 45 minutes each. 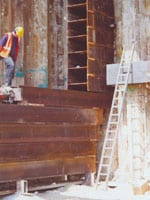 Forty-two beams were installed in 12 days, meeting the target of 3.5 per day. The beams were then welded to the sheet piles to stop the sheets from moving outward. The Genseed crew then removed another 4 m (13 feet) of soil and installed another row of 4 tie bars.

The second phase of ramming for the side walls was ready to begin. Two walls were built each containing eight I-beams lying on their sides and supported on a series of suspended pads. Ramming commenced from the top down using the beam under the one being rammed as the guide for the ramming equipment. The last beam in each stack was driven from a set of rails mounted between the suspended pads. Two more rows of beams were installed using the same method, bringing the total to 20 beams per sidewall.

After a total of 25 days (64 hours), the last beam was successfully driven. The Genseed crew installed a total of 1,148 m (3,760 feet) of I-beams with the Grundoram Koloss. The work was completed 10 days ahead of schedule. The complete roof and wall beams were well within specification. Both main contractor Genseed were delighted with the successful outcome of the new joint venture. 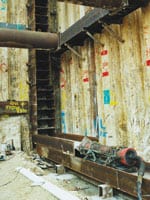 At the project’s completion over 1,148 m (3,760 feet) of I-beams were successfully installed under the railway tracks using pneumatic pipe ramming. 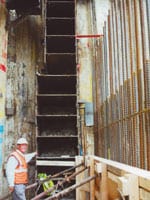