The pipe bursting project was being done for Cominco, LTD, Trail BC. Cominco is one of the largest integrated zinc and copper producers in the world. The Canadian company, incorporated in 1906, has operations in Canada, the United States, Chile and Peru. As part of a general upgrade and plant rehabilitation project, a water cooling line was earmarked for replacement. According to Bachand, the burst was especially challenging. He said, “Cominco had a critical cooling line at its facility in British Colombia that had begun to collapse. To add to the problem, the pipe was 700 feet (213 m) long, extremely deep and was below a highly congested area of the plant with buildings, roads and extensive underground infrastructure.”The only solution was to pipe burst the entire run. An open cut option was not feasible. The old cooling line was wood stave pipe and in very rough condition. In many places collapsed to half its diameter.”

An example of wood stave pipe. Wood stave was used extensively throughout North and South America in the early 1800s. Kamloops Augering is the only recorded contractor to successfully pipe burst 30-inch diameter wood stave pipe.

Two other factors made this particular pipe bursting job unique, the host pipe and the bursting tool chosen for the project. Wood stave pipe in itself is not unique. The pipe was used extensively throughout North and South America throughout 1800s. Replacing deteriorated wood stave through pipe bursting, however, is unique. TT Technologies Pipe Bursting Specialist Mike Schwager explained, “Until the Kamloops project, only a small number of wood stave bursting projects were ever attempted and certainly none of this magnitude and diameter. The thing that makes wood stave so difficult to burst is actually steel. Wood stave pipe is usually bound together with steel bands like a wooden barrel or a continuous steel spiral band.” Bachand selected the largest bursting tool available for the project, the Grundocrack Taurus pneumatic pipe bursting tool. In order to effectively burst the steel banding the Kamloops crew used a 32-inch (813-mm) diameter front expander for the tool and equipped with special cutting blades. This expander was crucial to the success of the project.Equally rare to the type of pipe being burst, was the use of such a large bursting tool. Schwager said, “We don’t run into situations where we need that large of a tool for bursting that often; except in cases like this. The majority of the pipe bursting work currently being done can be more efficiently handled by bursting tools from 3 to 18 inches (76 to 457 mm) in diameter. In the future I believe we will see the need for the larger and more powerful tools, like the Taurus, as we start bursting more and more pipe diameter over 30 inches (762 mm).”

Marwest Industries prepared the entrance pit. The pit was quite extensive because the wood stave line was located 20 feet (6 m) below the surface. In addition the entrance pit needed long enough and wide enough to accommodate the 30-inch (762-mm) HDPE product pipe as it was pulled into place during the bursting operation. The 700 feet (213 m) of HDPE was fused on site. A winch system was set up at the end of the run, in a 54-inch (1372-mm) diameter manhole. Once the bursting was completed, the Kamloops crew planned to remove the front expander from the tool and pull the bursting tool out through the new product pipe. 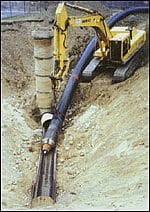 The bursting proceeded without incident. Bursting times averaged 3 to 4 feet (914 to 1219 mm) per minute. Bachand said, “We were very impressed with the performance of the equipment. We excavated one section of the pipe in order to tie in some lateral connections. Other than that, we expected retrieving the 10,000 lb (4535 kg) Taurus pipe bursting tool through the newly installed HDPE to be the most difficult part of the project.”Once the tool arrived at the exit manhole, the Kamloops crew removed the expander without incident or damage to the manhole. The winch was then moved to the entrance pit and a winch-line was rodded through the new HDPE and attached to the tool. The Taurus was pulled back, through the new HDPE, to the entrance pit without a problem. The new HDPE line was tied into the existing manholes and put back into service. The entire project took a mere eight days to complete, start to finish.Bachand said, “Everyone was extremely pleased with the results. Pipe bursting was the only way that job could be completed. Cooperation between Marwest, Cominco and our crews was excellent. It was a good job all the way around.”