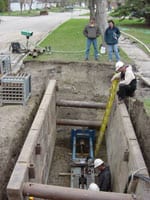 Kemper Construction was able to burst runs with significant sweeps and bends in them. The Grundoburst 800G’s flexible Quicklock bursting rods form a flexible chain that accommodate turns and bends in the bursting run. Note the insertion pit is barely visible in the background.

New Town, North Dakota is, by many standards, a relatively new town. Established in 1952, the town was created as a result of the building of the Garrison dam and the creation of Lake Sakakawea. While the town may be relatively new, in terms of age, it is still suffering from the same problems other cities and towns around the United States are suffering from, infrastructure deterioration.

Problems with the city’s existing cast iron water system prompted officials to look for a solution. The answer according to Kemper Construction (Minot, ND) President George Kemper was main and service line replacement. He said, “The project was originally specified open-cut, but with a majority of the project taking place in the boulevards, the disruption and ultimate restoration work would have been significant and really made an impact on the area. A trenchless solution was needed for this project.” The solution was static pipe bursting.

With the project turning from open cut to trenchless and the potential to burst and replace thousands of feet of pipe, Kemper contacted TT Technologies for technical support. Pipe Bursting Specialist Mike Schwager said, “This project definitely tested everyone involved. We had tough soils, weather and big runs to contend with, but the Kemper crew really rose to the occasion.”

During the static process, bladed rollers, a bursting head and expander, and the new HDPE are pulled back through the existing pipe. The bladed rollers split the host and the expander forces the fragmented pipe into the surrounding soil while the new pipe is pulled in simultaneously.

The New Town water main replacement project included bursting and replacing over 10,000 feet of 6-inch and 8-inch cast iron main with primarily 8-inch High Density Polyethylene pipe (HDPE). Also included in the project was the replacement of over 200 services with 1-inch HDPE. In addition to the bursting and boring, about 1,000 feet of the project was completed through directional drilling and 2,000 feet was open cut.

According to Project Engineer Lonni Fleck, AmeriTech Engineering Corporation, Williston, ND, despite only being only 50 years old, the cast iron mains were rather deteriorated. She said, “The existing water mains and services in the original site of New Town have been in place since the early 1950s. The underlying glacial till soil in the area is characterized by high mineral content. Electrolysis occurs when minerals react with the cast iron pipe. Over time, electrolysis has corroded the exterior piping and consequently has been a factor in numerous water main breaks.

“Also, the water mains and service lines have accumulated a build-up or encrustation on the inside of the piping. The encrustation is due to the high pH associated with the lime softening process. The existing water treatment plant has exceeded its design life and capability that has made it difficult for city personnel to adequately control the pH of the finished water. The build up also severely restricts the flow of water.” To remedy the problems main and service line replacement was necessary.

Much of the project took place in neighborhood areas, about 60 percent in the boulevards according to Kemper and the rest under the pavement. He said, “The thing that was most dramatic about the project was that the city stood to loose as many as 200 large diameter trees. I mean 24-inch diameter trees. Most of those trees were saved because of the trenchless process.

“But initially, the job was spec’d as open cut. We talked about a bursting option with the engineer, but there was no way to really bid it that way because they had all of the restoration items. We knew, though, that they would consider it after the fact. So we bid it open cut and eventually negotiated it into a bursting project based on doing a trial area. Having an engineering firm that was open to ideas and willing to discuss different ways to approach the situation helped make this project a success.”

Bursting Around The Bend 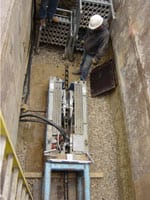 Kemper Construction was able to burst and replace over 1,000 feet per day at times during the project utilizing the static pipe bursting process. The crews used Grundomat piercing tools to install over 200 new water services on the New Town, ND project as well.

The static bursting process used in the New Town project is basically a three-step process. After establishing launch/insertion and exit/machine pits, bursting rods are inserted through the existing line from the exit pit to the launch pit. At the launch pit, the bladed rollers, bursting head, expander, and new HDPE is connected to the bursting rods. Finally, the entire configuration is pulled back through an existing line by a hydraulically powered bursting unit. As the bladed rollers are pulled through, they split the host pipe. An expander attached to the rollers forces the fragmented pipe into the surrounding soil while simultaneously pulling in the new pipe.

Schwager said, “The bladed roller configuration is an essential part of the Grundoburst’s success. The specially designed bladed rollers actually split the host pipe instead of ripping or tearing it. This is a clean process ”

Much of the New Town project required bursting runs to follow sweeping curves in the line. Bursting around these bends and curves can pose challenges for many static bursting systems. According Schwager, the key to success is in the bursting rod. He said, “The importance of the bursting rods cannot be overlooked. Quicklock style bursting rods actually form a flexible chain that, when linked together, has a rather forgiving bend radius. This accommodates some offset pipe bends.

“The added flexibility of the linked Quicklock rods can really make all the difference in a static bursting project. Plus, this type of system speeds the installation process as well as the breakdown procedure. The rods can be quickly removed one at a time at the exit pit as bursting is in operation.”

With a majority of the 6-inch and 8-inch water main replacement project taking place in the town’s boulevards, the city stood to loose many mature trees. Note minimal disruption and restoration after project completion.

For the trial run of the bursting process, a 1,100-foot section of 6-inch main was chosen. Kemper crews began by dividing the run into two segments. The first run was 425 feet and the second run was 690 feet. Schwager said, “The machine pit, or exit, pit was excavated where the valves and tees are located. This is the most logical location for a pit because the valves and tees would need to be excavated anyway. Plus it divides the run nicely and allows the crew to utilize the same machine pit for both bursting runs.”

After completing and shoring the exit pit, crews excavated a launch pit at the corner fire hydrant approximately 425 feet down the boulevard. The existing 6-inch cast iron main, at a depth of nine feet, was to be burst and replaced with 6-inch HDPE. According to Schwager bursting got underway around 3:00 pm and by 3:55 pm the new HDPE was in place. The crew then turned the bursting unit 180 degrees in the pit and started to prepare for the next section.

The second run posed a greater challenge. Schwager said, “The second run contained a sweeping turn, a radius, that was dramatic enough to put the launch pit out of site when standing at the machine pit. The flexible Quicklock rods, however, were able to make the bend.”

After the rods were inserted for the second run, pullback began around 8:00 pm. By 9:40 pm the second run of 690 feet was complete and bursting became the process of choice for the New Town project.

Possibly the biggest challenge for Kemper crews faced on the New Town project came in the form of the 200 service line replacements they needed to complete. According to Kemper soil conditions made work difficult. He said, “We ran into issues with the hard dry clay and gravel. It was a challenge to get the kind of production levels we had hoped for in some areas because of that. In some locations we had to directional drill the services and in a few we had to excavate a portion of the installation.

“There are some aspects of the trenchless project that are different then an open cut, especially if you are going to reconnect the services. You have to have the ability to locate the services to do that. And we were able to that with an electronic locator. The services were 3/4-inch copper so we were able to locate them and hook on top the old curb stop.” Kemper crews used a Grundomat P-65 piercing tool to make service line installations under roadways, driveways and sidewalks. According to Kemper average installations measured 50 feet in length.

Throughout the project, Kemper crews were able to maintain tremendous levels of production, averaging in some cases well over 1,000 feet of bursting per day. George Kemper sees a future for static pipe bursting at his company. He said, “Yeah, overall we’re impressed and we hope to be doing more of this. I think people are starting to take notice and there’s definitely going to be projects where this [pipe ”

The engineering firm was also impressed with the process and Kemper’s efficiency. Fleck said, “The minimal surface disruption has really made this project a success. There has been minimal impact to existing site features such as mature trees, curb and gutter and asphalt paving. The cost savings on surface restoration has essentially offset the higher cost of trenchless installation. The seemingly indestructible HDPE piping is providing a higher quality end product for the city while staying within project budget.” 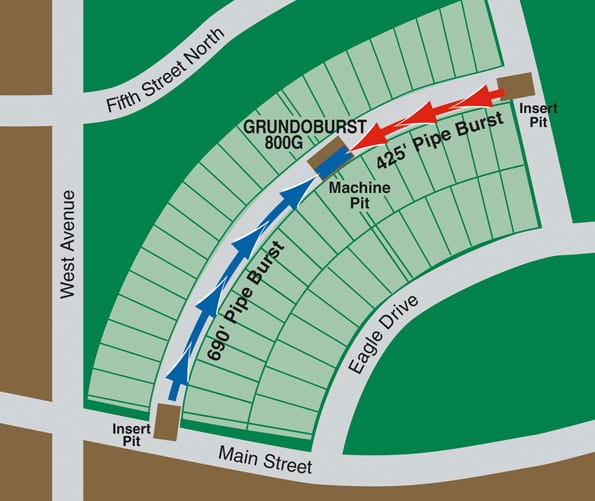 The Kemper crew divided the bursting run into two sections. The Grundoburst was placed in the middle of the two runs. The crew burst in one direction, rotated the machine 180 degrees, then burst in the other direction. Note the sweeping curve of the bursting runs.