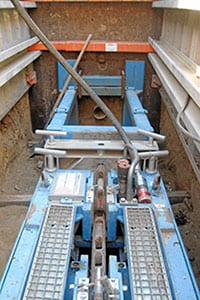 Numerous water services, fire hydrants, gate valves will be removed and reconnected. The paper will demonstrate the practicality of pipe bursting in areas with these features. Steel pipe was widely used in many parts of the West after WWII. In the mountains, steel pipe was cut and welded together as needed to get around boulders and tree stumps.  This is the reality of pipe bursting in mountainous areas. The project is currently underway and will be completed this summer.

While pneumatic pipe bursting has become a widely accepted and utilized trenchless pipe replacement method, bursting ductile iron and steel pipes has always been a limitation of the pneumatic method.  The development of hydraulically operated static bursting systems with bladed rollers has provided an alternative to pneumatic pipe bursting that has become valuable in a wide range of pipe replacement situations.  These static bursting systems are able to burst/split and replace ductile iron and steel pipes.

In the static process exit and launch pits are used in the same way they are for pneumatic bursting.  First, the hydraulic bursting unit is positioned in the exit pit.  Then the bursting rods are pushed through the host pipe and into the launch pit.  Patented Quicklock bursting rods are linked not screwed together like traditional drill stems or other static systems. This system speeds the installation process as well as the breakdown procedure. The rods can be quickly removed one at a time at the exit pit as bursting is in operation.  A flexible guide rod helps the bursting rods navigate through host pipe as shown in Figure 1.

Figure 3: Host pipe is split and displaced, while new pipe pulled into place.

The flexible guide rod allows the bursting rods to navigate the typical imperfections found on the inside of the host pipe such as sags, humps, dropped joints, debris and other obstacles.  At the launch pit, the flexible guide rod is removed.  The bladed rollers, bursting head, expander and new pipe are then attached as shown in Figures 2 and 3. The specially designed bladed rollers actually split the host pipe instead of ripping or tearing it.

The entire configuration is pulled back through the host pipe by the hydraulic bursting unit.  The bladed rollers split the existing pipe, while the bursting head and expander displace the fragmented host pipe into the surrounding soil.  The new pipe is pulled into place simultaneously. 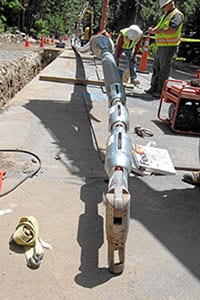 The Incline Village General Improvement District (IVGID), is a quasi-public agency established under Nevada Revised Statute, Chapter 318 and chartered to provide water, sewer, trash and recreation services for the communities of Incline Village and Crystal Bay, Nevada. It is governed by an elected Board of Trustees which, acting on behalf of the electorate, sets policy and determines strategies for the accomplishing its charter. Both Incline Village and Crystal Bay, Nevada are located within Washoe County, the entity that had the authority to create IVGID, and they are both unincorporated areas within Washoe County.  The Water main Replacement and Fire Flow Enhancement Project included replacing approximately 2,500 feet of old steel water mains by means of trenchless pipe bursting.  Q&D Construction, Sparks, NV, was contracted to preform the pipe bursting. 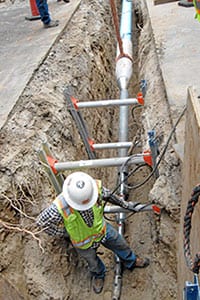 Figure 5: The fabricated sleeve runs between the cutting heads and the expander.

A special sleeve was fabricated to help prevent the existing pipe from stacking.  As the thin walled steel pipe is split, it has a tendency to want to buckle and collect or stack up in front of the cutter head and expander train.  The 4-foot sleeve helps the existing pipe split evenly and maintain as much of its circular shape as possible, allow the pipe to remain in the ground as it is replaced Figure 5-6.

During the exaction of the exit and launch pits, crews discovered that the existing steel pipe was encased in a special wrap.  This wrap was composed of 20 to 30 percent asbestos.  As such, crews needed to take special precautions when dealing with any of the existing pipe exposed during the excavation of launch and exist pits.  In addition, Washoe County ordered special testing be done on the pipe samples at a lab specializing in asbestos materials. 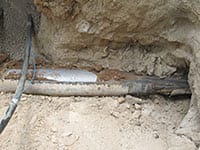 Figure 6: The fabricated sleeve help the existing thin-walled steel pipe to retain its shape after being split and prevent it from stacking up in front of the expander. 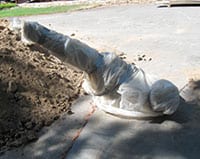 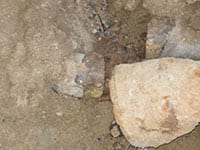 The lab determined from samples provided from the jobsite that the asbestos contained in the pipe wrap was not friable, meaning that it could not be pulverized under hand pressure, hence limiting the potential that the asbestos could become airborne.  However, the contractor proceeded to take every precaution when dealing with pieces of the existing pipe Figure 7.

During bursting operations, Q&D Construction installed a 4-inch HDPE temporary bypass water supply for affected residents.  Soil in the area was hard, with sand, as well as large rocks, 24- to 36-inch in diameter Figure 8.

Average bursting runs ranged between 400 and 500-feet with several intermediate pits for services and to pre-cut any pipe couplers. Pull readings on the static pipe bursting unit on typical runs ranged from 125 bar to 200 bar.  Runs took approximately two hours to complete.  For several runs, crews need to remove a certain amount of existing steel pipe that stacked up on the bursting rods as the process took place Figures 9-11.

Figure 10: The fusible PVC pipe string, stage and read for bursting to begin. 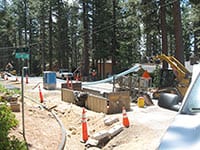