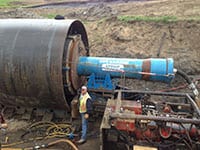 Design engineers, with the help of contractors and equipment manufacturers, are pushing the limits on pipe size and drive lengths for pipe ramming projects.  Much care and planning are necessary for a project to be successful like one recently competed by In-Ling Contracting Ltd.  The project in Fort McMurray in Wandering River, Edmonton, Alberta installing a 3657mm by 72m long steel creek drainage line under Highway 63.  In-Ling Contracting Ltd., Edmonton, was contracted to perform the work. 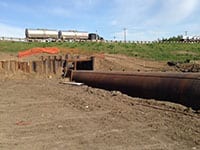 Because of the size of the pipe and the length of the drive, there was a need for possible additional jacking force. An internal 2438mm adapter was constructed to allow for the pipe ramming hammer to drive the pipe and still allow for a jacking cylinder to push the 3657mm pipe if needed. The internal 2438mm pipe adapter was built using internal support within the 3657mm steel pipe. The pipe ramming hammer could provide 40,000 kN of impact force and the jacking cylinders could exert up to 6,600 kN to the 3657mm steel pipe.

The pipe size, drive length, permafrost thaw, soil conditions and proximity to the highway all posed significant challenges. Pneumatic pipe ramming in conjunction with jacking cylinders was chosen as it allowed for the contractor to overcome most of those challenges. The project set up, ramming conditions, and equipment used all provided valuable information regarding pipe ramming under these types of conditions.

The Basics of Pneumatic Pipe Ramming

During trenchless pipe ramming, a pneumatic hammer is attached to the rear of the casing or pipe.  The ramming tool, which is basically an encased piston, drives the pipe through the ground with repeated percussive blows.  A cutting shoe is often welded to the front of the lead casing to help reduce friction and cut through the soil.  The use of bentonite or polymer lubrication can also be used to help reduce friction during ramming operations.

Several options are available for ramming various lengths of pipe. An entire length of pipe can be installed at once, or, for longer runs, one section at a time can be installed.  In the latter case, the ramming tool is removed after each section of new pipe is in place so that a new section can be welded on to the end of the newly installed section.  The ramming tool is connected to the new section and ramming continues.  Depending on the size of the installation, spoils from inside the casing can be removed with compressed air, water, an augering system or a mini backhoe.

Some casing installation methods are impaired or even rendered inoperable by rock or boulder filled soils.  Pipe ramming is different.  During pipe ramming, boulders and rocks as large as the casing itself can be “swallowed up” as the casing moves through the soil and can be removed after the installation is complete. 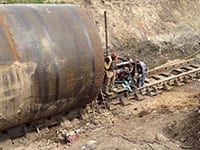 Ramming tools are capable of installing 102mm through 2032mm diameter pipe and steel casings.  Diameters up to 3759mm have been successfully installed using large scale ramming equipment.  Ramming requires minimal working depths and has proven effective for horizontal, vertical, and angled applications.  Ramming is also ideal for installations under roads and rail lines because it displaces the soil without creating voids or slumps.

Pipe Ramming Under The Highway

Highway 63 is a main corridor to the oil sands region of Canada. The casing installed under Highway 63 was part of a significant road-widening project.  The 3657mm casing was being installed to facilitate creek drainage under the roadway. The project was located in a slide area. The soil conditions consisted of heavy moist clay. 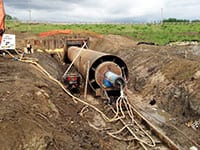 The contractor decided to use pipe ramming for the casing installation because of the slide area, as well as the time of year.  During the early summer, the permafrost was melting and causing the soil to press down on the casing creating additional friction.  Pipe ramming provided the best opportunity to install the casing and avoid surface slump, while avoiding potential significant damage to the highway through road sag.  A Grundoram Apollo pneumatic pipe rammer, from trenchless equipment manufacturer, TT Technologies, Aurora, Illinois, USA, was chosen for the project. 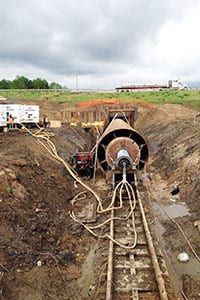 At the start of the project, crews pushed the pipe under the roadway as far as they could, utilizing the jacking system.  Crews were able to jack the pipe under the roadway approximately 22m before beginning the ramming process.  To power the ramming tool, crews had four 44m3/min. air compressors on site and used up to three compressors at one time during pipe ramming operations.

Throughout the project ramming progress averaged 63mm per minute utilizing the ramming tool in combination with the jacking system to help mitigate recoil from the percussive action of the pipe rammer.

Weather conditions provided an additional challenge on this project.  Crews contended with significant rainfall throughout, slowing progress and resulting in extremely muddy conditions.

The entire ramming portion of the project took approximately three weeks to complete.  The 2438mm drive adapter became fatigued with 9.1m remaining on the project.  The contractor was able to dig up the 3657mm at that point and make the final push to completion. 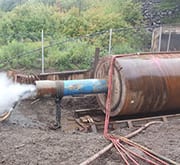 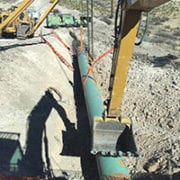