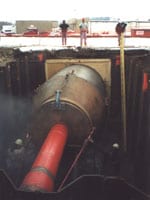 Ramming is often the best choice for installations under roads and rail lines because it displaces the soil and installs casings without creating voids or slumps.

Over the last several years NUCA contractor Miller The Driller, Des Moines, IA, has tackled some large-scale pipe ramming projects. With over 50 years of experience, this pioneering contractor has completed some of the toughest and most talked about jobs anywhere. A recent pipe ramming project in East Peoria, IL. adds to that impressive reputation. The East Peoria pipe ram ranks as the largest diameter pipe ram the contractor has attempted to date and one of the largest ever in North America.

For the East Peoria project this past winter, Miller The Driller was contracted to install a 50-ft tunnel underneath a rail line in order to facilitate a new bike path. According to Projects Manager/Estimator Brandon Young, son of Miller the Driller President Kris Young and grandson of founder Gene Miller, the installation method was key to the project’s success.

Young said, “We actually helped with the initial design of this project. The tunnel would be shallow beneath the railroad tracks and surface slump was a major concern. At that point a pneumatic pipe ramming application became the most preferable option.” Ramming is often the best choice for installations under roads and rail lines because it displaces the soil and installs casings without creating voids or slumps.

In order to create a tunnel large enough to accommodate bicyclists, the steel casing would need to be very large. The 122-inch diameter casing ultimately used for the tunnel put the project in the top five ramming projects ever attempted. To complete the job, Young chose the world’s largest pipe rammer, a 24-in diameter Grundoram Taurus from NUCA member TT Technologies Aurora, IL.

The ram took place under rail lines owned by the Peoria & Pekin Union Railroad. A 30-ft-long by 14-ft-wide launch pit was dug next to the tracks to accommodate the 10-ft sections of pipe and ramming equipment. The pit was shored and a concrete floor was poured to serve as a platform for operations.

After the pit construction was finished the Miller crew, including Foreman Roger Rumbaugh and Driller’s Assistant Gary Smith, brought in an American Augers boring machine and used the auger track as a driving stage for the Taurus. According to Young the boring machine assisted the ramming operation. He said, “We used the bore machine to push against the casing during ramming. We also used it to move the rammer back after each segment of pipe was rammed into place so the next one could be brought in.”

The pipe chosen for the East Peoria project was made by Permalok, St Louis, MO. Permalok casings employ a mechanical press fit design that provides the connection between casings as an alternative to welding. According to Young, the segments were later welded together from the inside. After the prep work was complete, ramming was ready to begin. 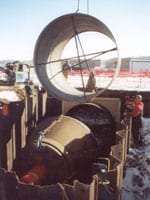 The crew carefully lowers a 10′ long 122-in diameter Permalok pipe section into place.

In order to make the connection between the 24-in diameter Grundoram Taurus and the 122-in diameter Permalok pipe, a special adapter was made by Arntzen Corporation, Rockford, IL. The 122-in inverted bell pipe adapter reduced the overall diameter to 80 inches. An 80-in ram cone was then connected to the adapter and further reduced the diameter to 30 inches. A 30-in ram cone made the final connection to the tool. The entire configuration was secured with tensioning chains and the tool was connected to the air compressor.

Despite the frozen ground conditions, five 10-ft casings were successfully installed with the Taurus over the next several days. According to Young the project was closely monitored for surface slump. He said, “In addition to our own crew, two outside entities monitored the ram; an independent engineer and the Illinois Department of Transportation. They carefully inspected the project three times a day. Ultimately there was less than 0.500 of an inch measurable movement.”

Once the casings were installed the Miller crew removed the spoil with a small Bobcat skid steer.

Once the casings were installed the Miller crew removed the spoil with a small Bobcat skid steer.

Young attributes the success of the project to several factors. He said, “Communication between all involved parties was excellent and it was critical to the project. There was also a high level of cooperation. Being able to be involved in the design stage of the project helped as well.”

In addition Young praised his crew and he said he anticipates more ramming in the future. He said, “We use ramming on the special projects. We enjoy it on the big pipe, big steel projects. We enjoy using it in severe soil conditions. We looked at work out west and down south, and we look forward to more in the future. TT Technologies is just an excellent supplier. They have a top-notch product that allows us to do our work in the most professional manner possible. Being able to team up with them really makes these big, tough jobs enjoyable.”

Potelco: Getting a Big Impact from Piercing Tools
Scroll to top