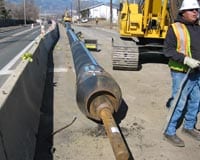 Static pipe bursting continues to flex its trenchless muscles in projects around the United States. The method has received a great deal of attention recently in regards to the usage of various product pipe materials, which has made static bursting more accessible and acceptable. A recent project for Colorado Springs Utilities, Colorado Springs, Colo., however, has turned the attention back to the method’s ability to take on tough projects and large diameter host pipes.

The total length of the bursting project was 2,529 feet. The water main ran under a highly traveled roadway in Colorado Springs, Colorado.

Colorado Springs Utilities provides water, wastewater, natural gas and electricity service to over 600,000 combined metered accounts. The utility’s potable water system consists of 1,780 miles of water mains. A portion of that system is comprised of steel mains installed in the 1950s.

For 15 years, the utility has been battling with a deteriorating 2,500-foot, 24-inch steel, coal tar coated water transmission main under one of Colorado Springs’ busiest thoroughfares, Galley Road. Crews have been patching the main for years with a variety of different temporary fixes including screws, wood plugs, welded patches and other materials. Its high traffic location and disruption factor prevented the utility from moving forward with a conventional open cut remove and replace solution.

Trenchless contractor Global Underground Corporation, Colorado Springs has an annual maintenance contract with the utility and approached them with the idea of utilizing trenchless pipe bursting to replace the failing main.

Global Underground President Robert Meadows said, “They have been talking about replacing this main for three years. They had been repairing this main with every method possible to keep it in service. They just looked at it and said this is how many dollars we’re spending to maintain this water main every year and it’s time to just replace it. 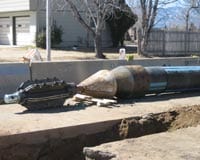 Several things. Specially designed bladed rollers contribute to the effectiveness of the static bursting method. The bladed rollers are pulled through the host pipe by a hydraulically powered bursting unit. As they are pulled through, they split the host pipe. An expander attached to the rollers forces the fragmented pipe into the surrounding soil while simultaneously pulling in the new pipe.

“It was a design-build with the utility and we were involved from the beginning. We did look at directional drilling as well, but there’s just no room down this street as the existing utilities have filled up the right-of-way. So, in order to get this water main in there, it was either going to be remove and replace, open cut, or pipe bursting.”

Meadows described their primary business as unconventional utility construction. That includes hydro-excavation, sliplining, pipe bursting and horizontal directional drilling. The company features 11 directional drills ranging in size from 7,000 lbs to 440,000 lbs and have completed pipe bursting projects from 4 inches to 26 inches in diameter. 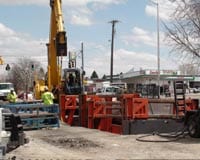 In order to take on a project of this size in a high traffic area, Meadows decided on a method that is growing in use and popularity. According to TT Technologies pipe bursting specialist Dave Holcomb, the static pipe bursting method has come a long way.

He said, “We’ve seen the static pipe bursting process continue to gain momentum in the industry. It’s matured. It’s become more versatile now that great progress has been made in using various product pipe materials such as ductile iron, fusible PVC, HDPE and clay. But, as this project in Colorado Springs demonstrates, the capability of the method to take on difficult host pipe materials is also a reason that static pipe bursting has become a sought after rehab and replacement method.”

Several things contribute to the effectiveness of the method. Specially designed bladed rollers are one important component. The bladed rollers are pulled through the host pipe by a hydraulically powered bursting unit. As they are pulled through, they split the host pipe. An expander attached to the rollers forces the fragmented pipe into the surrounding soil while simultaneously pulling in the new pipe.

The bursting rods are also critical to successful static pipe bursting. Holcomb said, “Quicklock style rods are securely linked not screwed together like traditional drill stems or other static systems. We’ve found that this system provides the optimum in terms of strength of connection and elimination of rod torque. This style of rod also speeds installation and breakdown because the rods are easily and quickly removed at the exit pit as bursting is in operation. There’s no time wasted screwing and unscrewing rods or having to deal with a potentially dangerous high torsion situation. Plus, in certain situations, you place the bursting unit in the middle of two runs and actually rod the second run by passing the rods through the back of the bursting unit while bursting the first run. Global Underground was able to take advantage of that technique during their project and it saved them a significant amount of time.”

The total length of bursting was 2,529 feet. The main ran under a highly traveled roadway in Colorado Springs. Meadows said, “Galley Road is a major street. I’m not sure exactly what the traffic volume is, but closing that east/west corridor would have been a real problem for the city. It’s normally two lanes of traffic in each direction, we were able to keep one lane open in each direction with the pipe bursting application.”

The 2,500-foot run was divided into five sections. According to Meadows, soil conditions were hard to pin down. He said, “Sections of this main had been dug up so many times over the years, we never knew what we’d encounter. The soil conditions changed constantly. Within a couple of feet you could go from tight clay to sand. For us, the project was remove and replace [the spoil] with select fill, road base.”

Typical launch and exit pits measured 40 feet long and 12 feet wide at depths up to 14 feet. Global crews were aiming for runs over 500 feet, but as Meadows explained, no one knew what to expect, especially when considering the diameter of the pipe and the coal tar coating inside of it.

Meadows said, “Well we weren’t sure how the machine was going to pull. We really didn’t know because of this material, this welded steel, there are no joints and the coating inside of the pipe created an issue. On the first couple pulls, that coating, coal tar, built up in front of the expander. And we ended up having to excavate and clean the material out before we could continue pulling. So, we made some adjustments to the cutter wheels and used some pipe soap. We put the soap on the front of the expander head and what it did was prevent the tar from sticking to itself and balling up in front of the expander.”

Ultimately, Global Underground crews completed runs of 466, 517, 496, 430 and 620 feet. The Colorado Springs Utilities in house crews completed the excavation and backfill. Global Underground and CSU crews worked together on the tie-ins. The two organizations worked simultaneously to keep the project moving forward and on schedule. Actual bursting time was 8 to 10 hours for the first sections because of the issues with the coal tar coating. Bursting times dropped significantly to three hours per run after the crews made adjustments to compensate for the coal tar coating.

“We knew there would be a lot of challenges with this project. And we knew that it was the largest project ever done for this size material. The teamwork between Global Underground and Colorado Springs Utilities was tremendous. And the technical support from TT Technologies through this challenging burst was exceptional.”