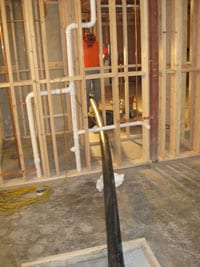 Claude H. Nix Construction/Jasco, Inc (C.H. Nix), Ogden, Utah, is one of the premier trenchless contractors in the Rocky Mountain Region. The company has been responsible for some high profile trenchless projects including a well publicized, large scale, multiple installation pipe ramming project, as well as one of the first documented uses of retrained joint PVC for product pipe in a pipe bursting application. Those high visibility projects have helped the company achieve a solid reputation in the industry. But it’s not always about high profile projects or large scale. Sometimes the smaller jobs can be just as challenging, if not more.

Recently the contractor took on a lateral bursting project in Wyoming that proved to be as difficult as any Project Manager Jon Nix has seen. He said, “The superintendent said that the lateral replacement project was part of a $5 million renovation of a 1970s era mansion in downtown Cody, Wyoming. The home was completely lacking insulation and the homeowners’ heating bills the preceding winter ran into to the upper $20,000 range and that prompted the renovation. The general contractor had replaced all the plumbing in the home and re-poured the floor before realizing that the existing sewer lateral was orangeburg pipe and needed to be replaced.”

According to Nix the orangeburg pipe is associated with various problems. He said, “There’s a lot of this type of pipe in this area. It is a paper and tar type of pipe. The problem with it over time is moisture will actually permeate the layers of paper and it will blister inside the pipe and the pipe becomes turburcualted. Then material flowing through the inside the pipe will begin to build up. The other issue you have is that it is very susceptible to root intrusion. It’s not a rigid pipe, like steel, concrete or clay. I’ve actually seen it where the roots have grown through and into it and completely displaced the pipe. So this pipe definitely needed to be replaced.”

Open cut was not an option for the lateral replacement as the pipe rain directly beneath the grand entrance to the mansion. It would have required the contractor to remove and replace the main entrance steps, which were very ornate, made of stone and mortar. In addition, the density of buried utilities, especially where the lateral tied into the existing manhole, precluded an open cut option and even made trenchless applications difficult. According to Nix, a directional drilling contractor, working on another un-related project, struck power lines in that area while Nix crews were working on the lateral replacement.

The project superintendent for the general contractor contracted C.H. Nix construction to do a pipe burst.

Nix said, “We probably done two or three hundred lateral bursts in our area over the years. As a trenchless contractor, lateral bursting is really just another tool in the toolbox, another way to put pipe in the ground. For the project in Cody, the superintendent for the general contractor actually found us on the Internet. And I took a gamble and bid the project sight unseen.”

The push for lateral replacement nationwide began over a decade ago as an effort to reduce the problems related to inflow and infiltration (I&I). According to TT Technologies Pipe Bursting Specialist Jim Moore, lateral pipe bursting is well suited for residential plumbing applications. He said, “On the residential side, the technology can really help homeowners mitigate problems normally associated with conventional open cut construction. The location of most laterals, beneath a landscaped yard, an entryway or a sidewalk makes open cutting the least attractive lateral rehabilitation option.”

But whether it’s part of an I&I reduction program or just the replacement of a root infiltrated lateral that is backing up, the fact remains that a trenchless rehab option is almost always preferable for lateral work. However, the nature of many laterals precludes some trenchless options as well. For example, using a directional drill to replace a 30-foot, 4-inch sewer lateral is not practical. Pipe bursting, on the other hand, is well suited for lateral replacement. It provides a trenchless option for lateral replacement that utilizes the existing line and allows for increase or upsize of the original host pipe diameter. 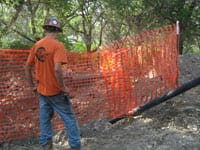 The first burst ran from the house to a pit dug by the contractor in the front yard. C.H. Nix crews set up the tugger in the yard and the pipe fusion equipment in the basement. The general contractor also prepared a pit for C.H. Nix crews in the basement. The length of the first run was approximately 70 feet of 4-inch orangeburg pipe being replaced with 4-inch HDPE. Crews arrived on site at approximately 7:30 am and completed the burst by noon, without incident.

Nix said, “The second run had it’s own set of challenges. [Laughs] The manhole, as it turned out, was an old cast-in-place structure, that was irregularly shaped, far from round. There was a phone pedestal and a couple of power pedestals out by the road. The manhole was in the parking strip and the curb and gutter was right there. So we really didn’t have a lot of room to work with. Initially we had hoped to remove the manhole, and pull from the pit in the yard, but when we got there and saw the situation, we knew we were going to have to change our approach.” 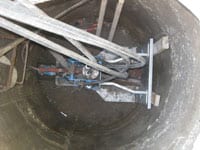 After a few quick measurements, it was decided, to attempt to pull from the other direction by placing the bursting unit in the manhole. However, in order to use the manhole as the pulling pit, crews needed to disassemble the unit and lower it into the manhole piece by piece and then re-assemble inside.

Nix said, “We’d never really done anything quiet like that before. We had a little group conference out there in the field and measured some things, and came up with the idea.”

The crew removed the ring and cover from the manhole to try and gain some clearance. The crews then cut the bottom two steps off the manhole in order to accommodate the hydraulic bursting unit. The lack of space also made a short bending radius for the cable. 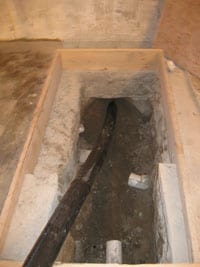 Nix said, “For bracing we put a few 2x4s between the walls and the faceplate. Because the manhole was round, but not symmetrically round, we had to cut wood shims and shim it in there to allow the unit to pull evenly.”

The 75-foot run included two 45-degree bends, one just beyond the pit and the other 6 inches before the manhole. Nix anticipated, because the last 45 degree bend was so close the manhole, that they would not be able to negotiate that bend and bring the new pipe in without some work on the manhole itself.

He said, “We knew that we were going to have to chip out a portion of the manhole to bring the head into the manhole. But we did not do that in advance of the burst operation. This was a dead-end manhole, so we didn’t have to worry about sewage flow. With that 45 degree bend just a few inches in front of the manhole, we decided to go ahead and burst the line and get the head right to that 45, just outside of the manhole. At that point we used a hammer drill to drill a radial pattern through the concrete, around the expander. We chipped away at the manhole and then reassembled the tugger and pulled the expander and pipe in.”

After completing the second burst, C.H. Nix crews fused the two lengths of HDPE together in the pit located in the middle of the yard. The general contractor was extremely pleased to have the new line in place and performed the tie-ins and manhole concrete work on his own.