The Roto-Rooter team was able to replace the 110-foot sewer lateral through lateral pipe bursting without interrupting business at a large automotive center. The cast iron lateral had completely deteriorated on the bottom and was heavily turberculated as well.

A failing lateral sewer line is often associated with a residence, but commercial properties have to contend with aging infrastructure as well. The effect at commercial properties can not only cause great inconvenience, it can also cost a great deal in terms of lost time, business, wages, etc if the business has to shut down in order to make repairs.

This was the type of situation Greg Smith, Regional Manager of Roto-Rooter, Mobile, Ala. was called in to remedy at a major automotive service center in Mobile. Smith said, “Obviously the failing sewer lateral is something that needs to be fixed, but closing the shop down to do it was not an option. We were called in to provide a solution. The solution we provided was trenchless pipe bursting.”

Frequent back-ups at the automotive center prompted the store manager to call in Smith and the team at Roto-Rooter. According to Smith, they responded to the call with the intention of unstopping a plugged lateral. Upon arriving at the site, Roto-Rooter service technician Keith Dubose attempted to run a cable through the line. The cable was only able to penetrate the line 10 feet.

At this point Dubose decided to insert a “see-snake” camera into the line. The camera revealed major deterioration in the cast iron lateral. According to Smith the entire bottom of the cast iron line was deteriorated and the remaining portion of the pipe was heavily turberculated. It was clear the lateral would have to be replaced.

It was also clear the team faced an extremely challenging project. Smith explained, “The lateral ran from well inside of the building, starting at the center’s restroom facilities and traveled under the garage service area, then under a road where it eventually connected to the main. To make the project even more difficult, the 110-foot long lateral contained two 45 degree bends in it.”

Dubose called in General Manager David Etheredge and Plumbing Supervisor Bill Wilmoth for technical support. They reviewed the layout and determined lateral pipe bursting was the correct method to replace the failed line. According to Smith the next step was convincing the building owner and store manager that the process was right for the job. He said, “We met with both the building owner and the manager of the store and went over the options for replacing the lateral. The store manager was very concerned about the impact this project could have on the productivity of the store and the inconvenience of not having restroom facilities. We assured him that the facilities would not be down for more than six hours and that disruption to the store would be kept to a minimum throughout this process.”

The rapid growth in lateral pipe bursting has come about recently for several key reasons. Inherently the method is well suited for lateral replacement. It provides a trenchless option for lateral replacement that utilizes the existing line and allows for increase or upsize of the original host pipe diameter. That fact alone is extremely valuable on jobs where lines are being replaced because of capacity issues.

According to TT Technologies Pipe Bursting Specialist Stacy Lynn, the acceptance of lateral pipe bursting is not surprising. He said, “Bursting laterals is not new, but for a long time, pipe bursting contractors focused on larger and larger diameter pipes. So, the method was not considered viable by plumbing contractors as means to replace sewer laterals. The same was true to an extent with equipment manufacturing. Bigger was the goal in many cases. But that’s changing. High quality and highly capable lateral bursting equipment is being manufactured. And it’s being used in the field everyday.”

The Grundotugger static bursting system is specifically designed for lateral bursting applications. Pipe bursting laterals has gained popularity over the past several years because the method is well suited for the application and keeps disruption to a minimum.

The Roto-Rooter crew needed to overcome two 45-degree bends in the run under the automotive center. According to Lynn overcoming turns and bends in the line is one of the benefits of the static system, but utilizing a proper power supply is key to success.

He said, “While the equipment can negotiate turns and bends a proper hydraulic system needs to be powerful enough to overcome these difficult areas of the run. The system also needs to be capable of handling foreign material and other contaminants found at every jobsite. An electro-hydraulic system is the best option for hydraulic power. A simple industrial hydraulic system with a sequence valve design doesn’t survive long in the field.”

The decision was made to burst through one of the 45 degree bends, and excavate the second, dividing the run into two sections with the exit pit in the middle. The crew excavated a launch pit behind the restroom facilities. After rodding the existing line and placing the winch cable, the crew positioned the Grundotugger static bursting unit in the exit pit. At the launch pit, a standard direct bolt expander was connected to the approximately 75-foot long section of HDPE.

The connection between the new HDPE and the expander is another critical component in lateral bursting. Lynn said, “The direct bolt method is a very common way of connecting the expander to the new pipe in main line bursting, but it can also be used for lateral bursting. For difficult lateral projects, a pneumatic piercing tool can be used to assist bursting operations from the inside of the new HDPE, behind a direct bolt expander. A quick grip type expander connection is also common in lateral bursting, but does not allow the piercing tool assist option.” After the expander was connected the fused HDPE, the winch line was connected.

The crew then connected the hydraulic power pack to the bursting unit. After all of the connections were made, bursting operations began with the bursting unit steadily pulling the new pipe through the existing line. Within an hour the first burst was complete and the 75-foot section of new HDPE was in place.

According to Lynn the lateral bursting process is simple. He said, “You’re dealing with a very basic concept. The hydraulic tugger unit pulls the winch cable, expander and new pipe through the existing line. The expander fractures the existing pipe and displaces the fragments into the surrounding soil while the new pipe is pulled in behind.”

At this point, the Grundotugger bursting unit was re-positioned in the exit pit to facilitate bursting the second section of the lateral. Crews fused together 35 feet of HDPE and made the necessary connections. Bursting was again underway and a short time later the second section of new HDPE was in place. During both bursts, business continued at the service center as if nothing was going on.

After the bursts were complete, the Roto-Rooter crew made all the necessary connections to get the line back in operation. Restoration work then began on the exit and launch pits. 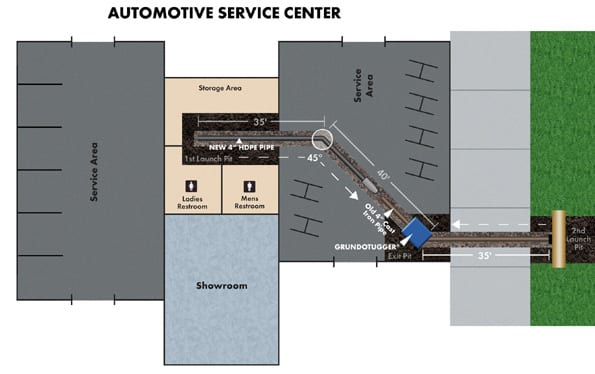 The lateral line under the automotive center contained two 45-degree bends. The Roto-Rooter team burst through one of the bends and excavated the other in order to divide the run in half.

At a rate of at least one bursting project a week Smith sees the impact bursting is having on the industry. He said, “As more people learn about the pipe bursting method and become familiar with its benefits, there will obviously be more opportunity. On this particular project, we estimate that the automotive center saved over $20,000 by bursting instead of open cutting. With benefits like that, people are going to take notice.”