The Vietzke crew used the Grundotugger static pipe bursting to replace the deteriorating lateral. The Grundotugger provides a compact, portable and powerful option for lateral replacement.

There has been a lot of focus put on the rehabilitation and replacement of sewer laterals recently. The push for lateral replacement can be attributed in large part to the nationwide effort to reduce the problems related to inflow and infiltration (I&I). As municipalities replace aging infrastructure, they are discovering a significant percentage of I&I is directly related to deteriorating lateral connections.

The rehabilitation and replacement of sewer service can be a difficult, expensive and time-consuming job. The location of most laterals, beneath a landscaped yard, an entryway or a sidewalk makes open cutting the least attractive lateral rehabilitation option.

But whether it’s part of an I&I reduction program or just the replacement of a root infiltrated lateral that is backing up, the fact remains that a trenchless rehab option is almost always preferable. However, the nature of most laterals precludes many trenchless options as well. For example, using even a medium sized directional drill to replace a 30-foot, 4-inch sewer lateral is not practical.

Pipe bursting may be a solution to the lateral replacement dilemma as it was recently in Spokane, WA. Vietzke Excavating, Spokane, WA. was contracted to replace a deteriorated lateral line at a private residence. The intricate, ornate landscaping of this 1938 estate and the location of the lateral made open cutting not only undesirable, but also impossible. Jobsite access also made most other replacement methods ineffectual as well.

According to Vietzke Excavating Vice President Paul Vietzke pipe bursting proved to be the method of choice for a difficult lateral replacement in a prestigious Spokane neighborhood. He said, “The lateral line was deteriorating and suffering from tree root infiltration. It had been the cause of several back-ups in the home. Because the lateral ran underneath a beautifully landscaped yard, the location of the line made pipe bursting perfectly suited for this job. With all the landscaping issues as well as access issues, static pipe bursting was the ideal solution because it’s trenchless and follows the path of the existing line.”

The explosion in lateral pipe bursting has come about recently for several key reasons. Inherently the method is well suited for lateral replacement. It provides a trenchless option for lateral replacement that utilizes the existing line and allows for increase or upsize of the original host pipe diameter. That fact alone is extremely valuable on jobs where lines are being replaced because of capacity issues.

According to TT Technologies Pipe Bursting Specialist Jim Moore, the acceptance of lateral pipe bursting was just a matter of time.

He said, “We have been bursting laterals for years, but for most of its existence, pipe bursting has been evolving toward larger and larger diameter pipes. So, it was not thought of by plumbing contractors as a viable means to replace sewer laterals. The same was true to an extent with equipment manufacturing. Bigger was the goal in many cases. Today it’s more global. High quality and highly capable lateral bursting equipment is being manufactured. And it’s being used in the field everyday.”

The Spokane project highlighted the benefits of trenchless pipe bursting in a residential setting. According to Vietzke, he was not the first person to look at this project. “The homeowner had contacted several different people regarding the project, but no one could provide a solution. Everyone said it was impossible. Our company has gained a reputation for taking on challenging projects, so we were referred to the homeowner. The estate’s extensive landscaping made an open cutting project very undesirable. It was a nice to look at the job and be able to say, ‘No problem, we can make it happen.’”

The project called for the replacement of a 60-foot, 4-inch lateral that ran from the home, down a hill, under a retaining wall to a cabana where it connected to the building’s facilities. Over the length of the run, there was an elevation change of approximately 25 feet. The existing pipe was as deep as 15 feet at one point. According Vietzke a majority of the lateral was VCP, but a small section under the retaining wall was concrete. Vietzke believes the lateral was installed when the home was built in the late 1930s.

The Vietzke crew carefully fused 25-foot sections of 4-inch diameter High Density Polyethylene pipe (HDPE) together to replace the existing 4-inch VCP lateral. The crew then excavated a small launch pit a few feet away from the cabana. The exit pit was excavated on top of the hill next to the house. A small 5-foot by 5-foot section of the concrete patio was removed to facilitate the exit pit.

An explosion in lateral pipe bursting has occurred recently because of the inherent trenchless benefits and the development of high quality lateral bursting equipment. After this project, the homeowners could barely tell any work had been done.

After rodding the exiting line and placing the winch cable, the crew positioned the Grundotugger static bursting unit in the exit pit. At the launch pit, a standard direct bolt expander was connected to the approximately 70-foot long section of HDPE. According to Moore there are several types of methods used for connecting an expander to HDPE.

He said, “The direct bolt method is very common in main line bursting, but can also be used for lateral bursting. For difficult lateral projects, a pneumatic piercing tool can be used to assist bursting operations from the inside of the new HDPE, behind a direct bolt expander. A quick grip type expander connection is also common in lateral bursting, but does not allow the piercing tool assist option.” After the expander was in place, the winch line was connected. 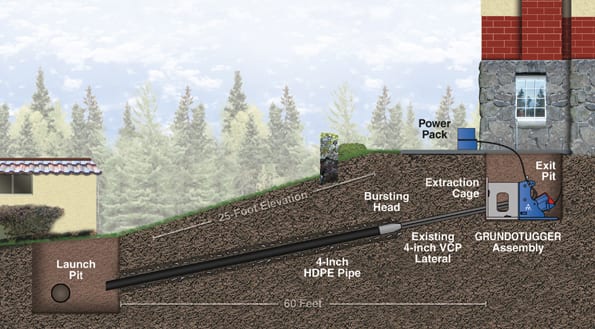 The Grundotugger is an example of new static pipe bursting equipment designed specifically for lateral replacement. This equipment can burst and replace laterals size for size or upsize, laterals up to 6 inches in diameter.

After all of the connections were made, bursting operations began with the bursting unit steadily pulling the new pipe through the existing line. Twenty minutes later the new HDPE was in place with minimal disruption to the surrounding landscape. The Vietzke crew tied the new HDPE into the line under the cabana and made the house connection as well. Crews then turned their attention to restoring the launch pit and pouring a new section of patio. According to Vietzke it was difficult to tell anything had been done when the restoration was complete. The homeowners were extremely pleased.