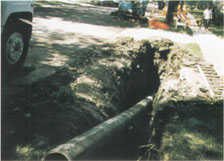 The benefits of pipe bursting are far reaching. The method has been used in Europe for nearly 20 years and has become very popular in the United States over the last several years. Often times, the most celebrated benefits of pipe bursting go unnoticed. And that’s usually by design. Recent travelers of a section of expressway near Chicago, for example, had no idea that an 8-in. sanitary sewer line was being replaced underneath the busy roadway. That was exactly what the crew of LoVerde Construction was hoping for.NUCA contractor LoVerde Construction, Wheeling, Illinois, has been pipe bursting for over four years. They have successfully completed thousands of feet of bursting. That made them the perfect contractor to replace and upsize 1,900 linear feet of deteriorating VCP sanitary sewer for the Village of Northfield, Illinois. Approximately 300 linear feet of the sewer rehabilitation project ran directly underneath the section of I-94 known as the Edens Expressway. Open cutting the expressway would not be possible. Only a trenchless option would be considered.

According to George LoVerde, President of LoVerde Construction, pipe bursting was well suited for this job for several reasons. He said, “Open cut trenching was an alternative, but very costly due to trench backfill and spoil removal. Several 75 year-old evergreen trees would have also been threatened by an open cut project. The Village did not want to loose those trees. And, of course, the section under the expressway was an ideal spot for pipe bursting.” According to Anthony LoVerde, Vice President of Loverde Construction, pipe bursting also provided the crew a trenchless means to increase the diameter of the existing pipe. Pipe bursting is the only method of trenchless pipe replacement that allows for the replacement of the old line with the same size diameter pipe or larger diameter.In order to upsize the existing 8-in. VCP with 10-in. HDPE, Anthony LoVerde used a 10-in. diameter GrundocrackGigant pneumatic pipe bursting tool from TT Technologies, Aurora, Illinois. The tool was equipped with a 15-in. rear expander. A 20-ton constant tension winch was also used to guide the tool through the existing clay pipe.

According to TT Technologies Pipe Bursting Specialist Ben Cocogliato, proper tool configuration was essential to the project’s success. Cocogliato said, “The Gigant was fitted with a 15-in. bolt-on rear expander. As the tool moves through the old line, that expander helps create enough space for the new HDPE and helps displace the fragments of the old pipe into the surrounding soil.”The crew also faced some rather difficult soil conditions during the bursts. Anthony LoVerde explained, “The soil in the area is very tough clay. In addition, we were working at an average depth of 14-ft. Those factors made this job particularly challenging.”After digging launch and exit pits on either side of the expressway, the crew positioned a 20-ton constant tension winch on the far side of the roadway. They also fused together the 300 ft. of HDPE needed for the run. Anthony LoVerde said, “The launch and exits pits were approximately 16 ft. x 18 ft., which isn’t bad when you consider what could have been with a non-trenchless application.”Travelers on the Edens were unaware that the 8-in. sewer line under the expressway was being replaced as they drove over. The burst went extremely well, taking just under 3 hours, start to finish. The rest of the project was completed over the course of several weeks. George LoVerde said, “We were very pleased with the results, as was the project engineer.

There was no disruption to the expressway traffic and the 75 year-old evergreen trees are doing just fine.”

Finding A Way Under The River