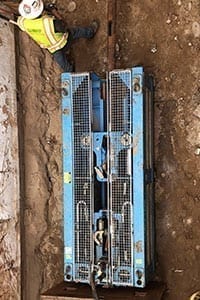 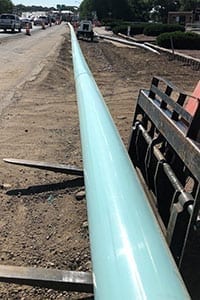 Fusible PVC was chosen to replace the existing VCP sewer. The static pipe bursting process can accommodate a wide range of product pipes depending on the specific requirements of the job.

AUI, Inc, Albuquerque, NM is a contractor that epitomizes that drive. The civil and utility contractor has been using a variety of trenchless construction methods for decades.  Recently, AUI had the opportunity to achieve a significant pipe bursting feat for the city of Farmington, NM, a 100 percent or double upsize of an existing sanitary sewer main.

According to AUI Trenchless Manager Mike Rocco, the project had been in the works for several years. He said, “I was approached by the engineering firm of Cheney, Walters and Echols [Farmington, NM] about three years ago about the feasibility of pipe bursting and upsizing from 8-inch VCP to 16-inch fusible PVC. We met and decided under certain circumstances it would be possible to complete a 100 percent or double upsize, however, a soils report would be a vital piece of information to help determine the amount of soil and material that would need to be displaced. Once the soils report was completed, the engineers at TT Technologies sized the proper machine for the job.”

The city of Farmington had several problems with the existing sewer line. In addition to the main missing pipe, it was undersized and surcharging at the manholes. The engineering firm specified pipe bursting as the rehabilitation method of pipe replacement.  The existing sewer was 8-inch inside diameter and the capacity requirements was to upsize to 16-inch nominal diameter pipe and this would require a 100 percent increase in size.

According to TT Technologies pipe bursting specialist Dave Holcomb, to complete the significant upsize took planning and execution. He said, “An upsize of that nature is really challenging and can be disastrous if not done right.  Mike Rocco and AUI planned things out well and did a good job putting the pieces together for a successful project.” 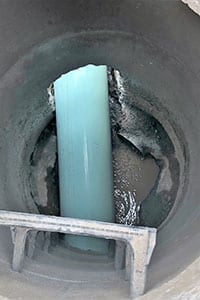 Bursting runs were determined by manhole location. Longer runs included bursting through a manhole and onto the next.

WESTT member contractor AUI, Inc. is a wholly New Mexico owned and operated corporation with 34 years of experience in heavy civil construction in the southwest United States. Founded in 1981, AUI has evolved with the times and the industry to become a multi-disciplined and diversified contractor offering a wide variety of services that include structural concrete and bridges, concrete paving and channels, heavy earthwork and trenchless technology, including pipe bursting, slip-lining and manhole rehabilitation.  Regionally, AUI is one of the leading providers of trenchless technology construction services.

The projects included a sewer main replacement, manhole replacement and the installation of a new water main. The sewer main replacement project consisted of pipe bursting the existing 8-inch VCP sanitary sewer line and upsize to new 16-inch fusible PVC (FPVC) DR-18. This constituted an upsize of 100 percent. For the manhole section, AUI would rehabilitate the existing 4-foot diameter manholes with fiberglass inserts. And the installation of a 12-inch C-900, DR-18 PVC water line would be completed through traditional construction methods.

Bursting Down the Highway

For the bursting, a total of 3,910 lf. of sewer main needed to be replaced. The depth of the existing sewer line ranged between 12 and 16 feet deep. And soil conditions, decomposed granite and sand with 2- to 4-inch cobbles, were conducive for pipe bursting.

Much of the bursting took place parallel to busy US Highway 64.  According to Rocco keeping businesses open was only one of the concerns about the project. He said, “At first it was the fear of, will this really work, upsizing from 8-inch to 16-inch.  We have never completed an upsize that large. Also, setting up the 6-inch pumps and 8-inch HDPE by-pass line for discharge and making temporary ramps for business access was very challenging.”

Underground Solutions, Poway, CA., provided the 16-inch fusible PVC.  Additionally, Underground Solutions was hired as a subcontractor to fuse the FPVC to the desired lengths usually 400- to 500-foot lengths and then pulled into the locations of the insertion pits for installation.

Rocco said, “Bursting run lengths were dictated by the distance between manholes.  The shortest one was about 250 feet. That was the first burst.  It was successful with the machine pulling at about 50 percent power.  From there, we gradually increased our distance of pulls. If we had two manholes close together, we would burst through one manhole and then onto the next. The longest pull was approximately 620 feet.”

Holcomb said, “One of the advantages of the static pipe bursting process is the ability to use a wide range of product pipes. Static pipe bursting is able to accommodate fusible pipes, as well as a variety of restrained joint pipe materials with special adapters and tooling. Fusible PVC used has been a quality choice for numerous pipe bursting projects.”

AUI made two excavations on each run. The first was the machine pit where the hydraulic Grundoburst was placed. The length of the trench box was 36 feet long and 12 feet wide. From that pit, the existing VCP sewer main was rodded with Quicklock bursting rods. The second pit was the insertion pit where the FPVC and the bursting head were connected to the bursting rods. AUI crews also excavated sewer services if required.

Once the machine pit, insertion pit, by-pass pumping and pipe fusion was complete, the pipe bursting process began. Rocco said, “It would take a day to fuse the pipe. Then a day to dig and shore the pits.  A day to burst and pull in the pipe and a day to backfill. So, over a four to five day period you would complete a bursting run.  We worked four, ten-hour days on this particular project. Monday through Thursday which created less disruption for the business, especially over the weekend.”

The sequence continued until all segments for bursting were successfully completed.

Once the bursting phase was complete, AUI crews turned their attention to the existing manholes that were severely deteriorated due to hydrogen sulfide and required rehabilitation or replacement. The original specification called for removing and replacing the manhole in kind, which would require open cut excavation and bypass pumping of the sewer.

Rocco said, “We proposed to basically slip-line the old manholes with new fiberglass inserts designed for H-20 loading, build up existing shelves with a Strong Plug to the top of the new FPVC pipe and install a new ring and cover. This was accepted and by the city and saved time and money.”

AUI crews then sliplined the old barrel section of the manhole with the fiberglass insert.  The annular space, approximately 1-inch, was then filled with lean fill concrete. A new 24-inch ring, cover and concrete collar complete the installation. Sixteen manholes were rehabilitated in total.

The final component of the project was completed through traditional open cut excavation. The existing 6-inch water line was abandon in-place. The new installation included 5,871 lf of 12-inch C-900 PVC water line, valves and double pumper fire hydrants with 12-inch PVC moving into the city’s right of way on US 64 highway.

Rocco said, “There were many components to this project.  But the fact that we were able to burst, expand and increase an existing 8-inch clay pipe to a new 16-inch FPVC pipe was pretty cool! I have to give a ton of credit to our entire crew who worked tirelessly on this job to make this bursting project a success!”

Holcomb said, “This was a challenging pipe bursting project. A 100 percent upsize is a significant accomplishment and AUI was the ideal choice for it.”

Penn Township Sewage Authority: Getting with the Program, The Pipe Bursting...
Scroll to top