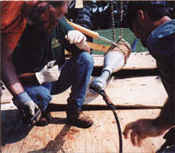 The cable is attached to the tool for the first burst. From the left, Larry Gross, TT Technologies; Richard Berry and Scott Moore, Tri-Star.

The first thing many people think of when they see the tournament course in Augusta, Georgia, is perfection, perfectly trimmed fairways, perfectly manicured greens The beauty and uncommon perfection of the facility do not, however, exempt it from common problems like infrastructure deterioration. So when the course’s 6-inch cast iron water lines began to fail, they needed a contractor that held the same high standards as they did.Tri-Star Contractors, Edgefield, South Carolina has been in the utility pipeline restoration and replacement business for almost 20 years. They have built their reputation on attention to detail and meticulousness. They were the perfect contractor for the job at Augusta.Richard Berry, President of Tri-Star Contractors said, “The job was bid as open cut, but I knew trenchless was the way to go. This is a beautiful golf course. Even the most carefully executed open cut would be noticeable.”The course’s on-site plumber had not been exposed to pipe bursting. Berry said, “I bid the job based on pipe bursting. When I told the people at the course that I planned to replace the pipe without open cutting they just laughed.”Berry even brought a videotape of a burst he had recently completed. He said, “It came down to the point that I gave them a price. I told them that one way or another I had to replace the water main. If I’m successful with the burst, they would have no disruption what so ever. If not, they would be no worse off than they originally anticipated. What did they have to loose?”After some questioning, Berry received the go ahead for the project. He turned to TT Technologies Product Specialists Eddie Ward and Larry Gross for their advice.

Buildings throughout the facility had been experiencing problems with water pressure for quite some time. The 6-inch cast iron water line that carried potable water to the Pro Shop and other buildings on the course was no longer functioning properly. Berry said, “The pipe was old. Most of the line ran underneath the course’s driving range. Sections of it were terribly tuberculated and other sections had just plain deteriorated.”Upon walking the course, TT’s Eddie Ward and Larry Gross identified potential problems with a pipe burst, the biggest being the joint type. To everyone’s knowledge, these types of mechanical cast iron joints had never been pipe burst before. Berry said, “Eddie and Larry were worried that the mechanical joints would resist pipe bursting and build up in front of the tool. We had no way of knowing for sure.”Additionally, the pipe was very shallow in spots, sometimes as little as 20-inches below the surface. Berry said, “It was a big concern especially in the parking lot in front of the Pro Shop at the end of the driving range. The lot had recently been re-surfaced and it was extremely shallow in that section. We did not want to put in an unwanted speed bump in their parking lot.”Finally, the rich clay soil posed a challenge as well. Berry said, “That tool was going to have to work hard to get through that good old Georgia clay.” The tool they decided to use for bursting the 1,000 feet of water main was a 8.5-inch diameter Grundocrack Hercules pneumatic pipe bursting tool from TT Technologies.

Before the equipment was brought in, Berry and his crew needed to establish the layout of each burst. Berry had already determined that the job would need to be done in sections, but the position of launch and exit pits still needed to be determined. Berry said, “We knew that somewhere on the driving range was a tee for a 4-inch line that serviced one side of the administration area. Unfortunately when we were doing our locating, we determined that tee was in the middle of one of the greens on the range.” It would take extreme care to prevent damage to the course. In order to facilitate the lengths of HDPE pipe needed and minimize disruption, the green would serve as the launch pit for two bursts.Tri-Star went to great lengths to ensure that no damage was done to the driving range, green, parking lot and any other area at the facility. In order to protect the area, Berry’s crew brought a truckload of 3/4-inch plywood. The entire work area was decked with plywood to prevent damage from crew members or equipment. In fact, a make shift road of plywood was laid from the parking lot to the green with the 4-inch tee.After laying plywood around the green, the sod was carefully removed and excavation began. In order to keep the site as clean as possible, Berry’s crew used Pel-bags to contain the soil. Berry explained, “Pel-bags are large canvas bags with buckle straps that hold approximately 1 cubic yard of material each. After the bag is filled, it can be moved to another location to minimize disruption. We used the Pel-bags for storage and to prevent the soil from ‘contaminating’, so to speak, the area.” The crew dug a launch pit measuring approximately 40-inches deep by 6-ft wide by 20-ft long. The long length of this pit was needed to facilitate bursting in opposite directions. Exit pits were dug 650 feet away at Washington Road and 350 feet away in front of the Pro Shop. The Washington Road pit measured 40-inches deep by 5-ft wide and 10-feet long. The exit pit in front of the Pro Shop measured 40-inches deep by 6-ft wide by 8-ft long. That pit was dug in a small flower garden area abutting a sidewalk.With launch and exit pits complete, the bursting equipment was brought in. 350-ft of 6-inch diameter HDPE SDR 11 potable water pipe was fused together.A 10-ton Grundowinch from TT Technologies was secured at the exit pit in front the Pro Shop. The winch provides constant tension and helps guide the bursting tool through the run.

The Tri-Star crew positioned the tool and started the air compressor and Grundowinch. Berry was not only concerned about the mechanical joints, but the host pipe’s shallowness worried him greatly on this portion of the run, especially since part of the burst ran directly under a section of stone wall that separates the tiered tee boxes. The tool entered the launch pit and began moving through the pipe. According to Eddie Ward, the Grundocrack Hercules was equipped with a bladed schnozz (guide head). Ward said, “The purpose of the schnozz in this situation is two-fold. First, it adds stability to the tool, helping to maintain line and grade. Second, it focuses point pressure and helps cut through difficult cast iron.” It was also hoped that the blade would help burst the mechanical joints.The first few feet of the burst went fine, until the tool reached the first mechanical joint. Berry said, “It was moving along fine, but when it reached that first joint it stopped. However, after 3 or 4 good piston rams, the tool took off. It got to the next joint and slowed up for 3 or 4 rams and took off again.”The burst went like clock work. There was no crowning of the soil, no disruption and the stone wall was still standing. The 350-ft burst took only 37 minutes. The Tri-Star crew returned the next day to attempt the second burst.

The second burst ran from the center of the green to Washington road. This burst was substantially longer than the first burst running a total of 650 feet. Despite the success the previous day, there was concern about the increased number of joints they were facing today. Berry said, “On the Hercules tool, we used a 10-inch rear expander because we wanted to make sure we had plenty of tool to break those joints.”The crew fused the length of HDPE pipe for the second burst. The new pipe stretched from the center of the driving range green, through the tee boxes, around a group of giant oak trees, along a roadway in front of the pro shop and onto the number one fairway. The tool was prepped and lowered into the launch pit as a group of guests arrived to watch the event.

A mechanical joint ring from the host cast iron pipe is still visible on the tool at the end of the burst.

The Tri-Star crew launched the tool and 61 minutes later, the 650 foot length of 6-inch cast-iron mechanical joint pipe had been burst and replaced with 6-inch HDPE potable water pipe. A large cheer erupted as the tool emerged at the exit on Washington Road.

After seeing the pipe bursting results, course grounds officials decided to burst additional lines. Berry said, “Just before clean up began, we were asked whether or not we could burst the 4-inch line that serviced the administration buildings and upsize it to 6-inch. I said no problem. We used the same tool and burst and upsized a 250-ft 4-inch line to 6-inch in about 45 minutes.”The Tri-Star crew cleaned up the site, back-filled the launch and exit pits to the point where they were barely noticeable. In fact, some were completely unable to tell. With their reputation intact and even enhanced, Richard Berry and Tri-Star contractors have been asked to come back to the tournament course during the next off season and replace lines under portions of the Par 3 course. Berry said, “By bursting cast iron mechanical joint pipe, we did something that has never been done before. To do it in such a highly visible place is remarkable. We’ve made more believers in pipe bursting.”

Pipe Bursting And PG&E: The Toolbox Gets Bigger

Finding A Way Under The River
Scroll to top