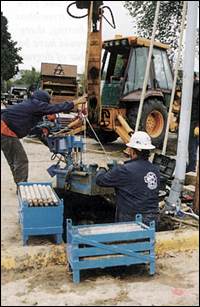 The compact size of the Grundopit rig means only small pits are required.

Almost every city or municipality has one, a certain job or project that remains unfinished or is not attempted, sometimes for years, because it is inherently too difficult for current technology or too great a risk for contractors. Occasionally, however, a contractor comes along with the right attitude and the right tool to make the impossible possible. Such was the case recently for contractor Hoffman and Hoffman in the City of Waverly, lowa.

Hoffman and Hoffman is no stranger to underground electrical work. The company is also no strangers to Waverly and its limestone bedrock soil. Contractor and ground conditions have done battle there before, but this job was different. A 21 m (70 ft) long, 152 mm (6 in) diameter, and 914 mm (36 in) deep hole was required, under a state highway through solid limestone. It seemed impossible, at least that is what everyone thought until they were introduced to a powerful pit launched, steerable, mini directional boring rig.

According to Dean Williams, Distribution Planner for the City of Waverly, the project had been on the shelf for quite some time. He said. “About a year and a half ago, we had an automobile accident that took out one of the overhead power poles downtown. Restoring the aerial lines was not an option because the poles are already too close to the highway. We needed to go underground.” Going underground was easier said than done.

The power line lost during the accident was a tie between two feeders. It served as a backup line if one of the feeders was lost. Whilst not essential, it needed to be replaced to ensure back up power and maintain reliability within the city’s power distribution system.

Waverly, lowa has a population of some 10,000 and is located approximately 30 minutes north and west of Waterloo. State Highway 3 runs directly through the middle of the town. Hoffman and Hoffman has completed many jobs for the town of Waverly including several trenchless electrical conduit jobs with standard directional drilling equipment. Duey Hoffman said, “We knew right away what we were up against when Dean showed us the site. Going 21 m (70 ft) under a 4-lane highway is tough enough, but through limestone bedrock, that’s another story.”

Williams knew that open cutting the heavily traveled Highway 3 was not feasible. In fact, it was never even considered as an option. Williams said, “We did not want to face tearing up the street, disrupting traffic, co-ordinating traffic control and restoring the street. This section of highway was resurfaced within the last 2 years.”

In addition to extremely tough soil conditions, a trenchless method would need to be able, if needed, to circumvent a multitude of existing underground utilities. These included a telephone line, gas, sewer and water mains, as well as a 6-way fibre optic utility duct. Williams supplied the Hoffmans with a map of sub-utilities in the area.

To successfully complete this job, the equipment used would have to be powerful enough to bore through limestone and have steering capabilities. In addition, the work area was tight, a conventional directional drill rig would not work. The tool would have to be compact. 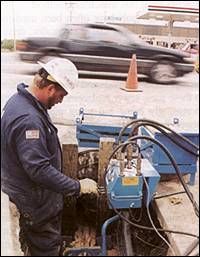 Operating the Grundopit rig beneath the busy highway.

As in the past, the Hoffmans looked to TT Technologies Product Specialist Jay Clark for assistance. Duey Hoffman said, “We have known Jay for a long time. Once we were contacted by the utility company for this job and knew what we were facing, we called him. He came down and evaluated the job and thought he had a piece of equipment that could do the job. This was a Grundopit rig.”

Recently made available from TT Technologies, the Grundopit 40/60 is an hydraulically operated mini steerable bore rig. Its compact nature, only 1,120 mm (4 ft) long, 480 mm (2 ft) wide and 480 mm (2 ft) tall, made it perfect for the Waverly bore. But everyone wondered if the mini directional had enough power to successfully tackle solid rock.

Dave Hoffman said, “We were quite concerned about this job because we attempted to use a standard directional drill to cross this highway in the early 1980s and failed. When I talked with Jay Clark I said, ÔJay, we are not talking about a small cable here, we’re talking about 101 mm (4 in) inner duct, through limestone.’ He was still confident the bore could be done.”

The job was scheduled for a Tuesday. A Waverly utility crew spent the better part of the preceding Monday jackhammering a launch pit for the drill through the sidewalk and limestone below. The launch pit measured 1,800 mm (6 ft) long, 900 mm (3 ft) wide and 1,200 mm (4 ft) deep. Another pit of similar dimensions was dug on the opposite side of the street in softer soil.

Dave said, “I knew the conditions there were tough, but I could not believe it when I heard they had to use a jackhammer to dig the launch pit.

After creating a small pilot bore with the jackhammer, the Hoffmans were ready to tackle the solid limestone.

By using the DigiTrak Mark III Receiver with remote monitoring, the Hoffmans knew the location and depth of the drill stem at all times. The remote system allowed the operator to monitor depth and location from the launch pit.

Duey said, “We remained in constant contact with the drill head as the bore was being made. The operator can tell by the feel of the machine and by using the locator where fractures and gaps occur in the limestone, as well as the back-fill areas around the sewer and water mains. At these points we would steer the drill right, left, down to, avoid a utility or up to level off.”

The areas of back-fill around the sewer and water mains were crushed rock. The Hoffmans were able to steer the drill at these points because the crushed rock was much more forgiving than the solid limestone.

The Hoffmans started the initial bore around noon. It took the 50 mm (2 in) diameter drill stem about 2 hours to make its way to the other side. The initial bore was complete.

Schematic of the ground and existing utilities faced on the Waverly project.

A spool of 101 mm (4 in) diameter SDR 15.5 Plexco HDPE pipe sat waiting on the other side. When installed, three 15,000 volt electrical cables would run through the conduit and join two feeder lines on opposite sides of the street. After the second backream, the crew prepared for the third and final backream with product pullback.

The Hoffman crew attached a 152 mm (6 in) diameter reamer to the drill stem and a PE pulling eye to the HDPE pipe. The reamer and the PE pulling eye were then linked and the pullback began. Again, approximately 11/2 hours later, the reamer was through and the pipe was in place. 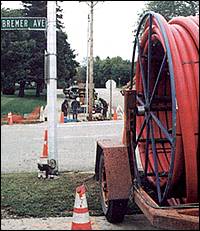 Ready for pullback the 101 mm diameter HDPE pipe in position at the reception pit.

Jay Clark said, “We used a 1,140 1 (300 gallon) Grundomudd Bentonite Mixing System to mix and deliver the straight bentonite, water and polymer. In this heavy rock situation, we used high flow levels to maximise the cooling capabilities of the fluid. The high fluid flow was also used to carry out the rock cuttings during the backreams.” The Hoffmans had nearly used the entire 1,140 1 (300 gallons) bentonite mixture by the end of the day.

After the last drill stem was removed, the Hoffman crew lifted the Grundopit out of the launch pit with a backhoe. Then an additional 1.2 m (4 ft) of HDPE pipe slack was pulled through with using this machine and a tow chain. Both ends of the HDPE pipe were capped and the clean up began.

Dave said, “The day Jay brought the Grundopit machine to attempt the bore, I looked at it and said to myself there is no way this thing is going to pull a 101 mm (4 in) diameter inner duct back, yet alone bore across. I was amazed when it worked. It was truly unbelievable.”

It took the Hoffmans a little over 6 hours to complete the bore, 3 successive backreams and product pullback. Williams was also amazed. He said, “We figured we would have some degree of success, but never this. I was very impressed and very pleased when the machine made it all the way through.”

Keeping The Game Going Soccer Sees No Delays As New Sewer Lines Are Bored B...
Scroll to top