Titan Technologies, Boise, Idaho has positioned itself as a leader. Although a young company by many standards (established in 2003), Titan Technologies has taken on the persona and maturity of a much older company. This is due, in large part, to the leadership and vision of company president Roger Thompson. Thompson brings with him a breadth of construction and contracting experience. This is one factor that has set Titan Technologies on a growth path that has exceeded all expectations.

Thompson said, “I started out in the business with my family. My dad had a small construction company. We did small septic tanks, roadways, etc. Then my oldest brother, who came to Idaho in 1970, and I got into road building with the forest service and did some logging. In 1985 I moved to Boise, and got into pipe work again. I also did site prep and crushing. So I guess I really have a wide gamut of construction experience.”

Reflecting on it now, that experience translates into resourcefulness on the job. Thompson explained, “I’m confident in tackling things that are unknown. I have no problem asking if I don’t know. I know where to get information.”

That experience also helped Thompson identify a client base for his services that would help ensure the stability and growth of his company. When he started the business in 2003, Thompson wanted to function as a utility contractor with a primary focus on sewer and water. Thompson explained that he and his wife wanted to work with city and municipal entities. The main reason being that those public entities pay within 30 to 45 days.

Thompson said, “After being in this industry for twenty plus years I did not want to hear or waste time dealing with money excuses. If we didn’t get paid, it’s our fault, nobody else to blame. I’m proud to say that we pay our subs within thirty days or sooner.” That experience is a primary reason that in its first year out, the company was projected to generate $1 million in revenue and ultimately generated $2 million.

Currently, Titan Technologies employs thirteen-fulltime crewmembers. Thompson would like to see that number grow, possibly as high as three seven-man crews. As far as fiscal growth is concerned, Thompson would like to see the company grow from their current level of about $2.5 million annually to somewhere closer to five or six million and maintain that level. Thompson is aware that his company can be considered, “young and small” and his conservative side is careful to not try to grow too quickly. He said, “We want our products and services to expand in a manner we feel that we are in complete control. Do not over-schedule. It’s ok to say, ‘No!’”

Titan Technologies started trenchless service offerings in a thoughtful and calculated manner beginning with mainline pneumatic pipe bursting. Jim Moore, TT Technologies, has been working with Titan Technologies since its inception. According to Moore, pneumatic pipe bursting is a good way to break into the trenchless industry. He said, “Pneumatic pipe bursting has really been around since the mid 1980s so there is a lot of cumulative experience out there with the process. The equipment that Roger has is the model for high production, a 10-ton constant tension winch and 7-inch diameter reversible pipe bursting tool. The equipment is portable, reliable and easy to work with. Plus it can be configured through the use of expanders to burst and replace a wide range of host pipe diameters.”

Thompson said, “It’s fast and very effective. For example, it’s just plain fun to watch 468 feet of 8-inch on 8-inch pipe bursting go in the ground at 5.85 feet per minute. I’m thinking, ‘Wow! 80 minutes! That was a fast one. Did we cheat? No! That was perfectly legal.’ I never get tired of watching a pipe burst.”

The versatility and effectiveness of bursting system combined with Thompson’s 26 years of construction experience have made for some high profile project successes. It has also allowed the company to gain valuable exposure in front of various public entities. This has been key to Thompson’s success with trenchless technology in that area.

Thompson said, “Our trenchless work has primarily come from word-of-mouth and telephone ads. It’s surprising how many telephone calls we get from engineers and city personnel asking questions about trenchless technology. Or people who have been to a seminar or construction expo where they’ve been exposed to trenchless. Sometimes, with a city, we’ll do a burst at cost to just get our foot in the door, especially, if there’s a large potential for future work. We’ll recoup the margin later.”

While bursting covers the rehabilitation and replacement side of Thompson’s business, the addition of a 3-inch diameter piercing tool has improved the company’s efficiency with new installations. He said, “We utilized this tool on a water project for the city of Greenleaf, Idaho. On a three-month project, we saved approximately one and a half weeks on water service tie-ins with this tool. We saw a significant reduction in asphalt patching and traffic control.”

According to Thompson, the use of trenchless technology reflects his attitude and philosophy toward work in general, as well as his view of customer service. He said, “I’ve always been production minded. I mean, I’m pretty intense when I get out there, probably too intense for my employees liking. I like speed and I like things to get done quickly. I have a short amount of patience, not with employees, I work very hard with them, but with processes or equipment that don’t work well or produce at the level I want. In a lot of ways trenchless equals speed and speed is less inconvenience to the customer, period.”

While Thompson strives for production results and efficiency, tools that are down for repair can hinder those goals. Thompson considers his maintenance program essential to his success and everyone takes responsibility for it.

He said, “We work closely with Modern Machinery, which is the local Komatsu dealer. They perform all of our oil changes and major repairs. Our foremen and superintendent keep track of individual machinery hours. Operators are required to perform light maintenance, including greasing and cleaning of air filters. Services are either performed on the job, or we transport the equipment to Modern Machinery’s shop.”

Safety is also a priority for Titan Technologies. Thompson actually brings in an outside firm to assist with safety training and updates. He said, “We have a minimum of two safety meetings a month with Safety Enterprises, an independent contractor whom we hire to come to the job site and hold tailgate safety meetings. These men are trained and current with OSHA issues. We have been utilizing their professional services for about a year. When they arrive on our projects, I believe it brings an atmosphere of professionalism in safety and a sense of seriousness that you may not get week to week with your own foremen or superintendent.”

Thompson envisions a positive future for his company. He said, “I’m confident in our employees so I’m confident about the future. We are currently licensed in Idaho and Oregon and would like to get licensed in Nevada and Washington. This will give us an even broader range of project selections in the future. As we gain more experience in pipe bursting and keep up-to-date with new advances and current issues, our future looks great.”

From day one we believed in preplanning. We knew from the beginning we wanted to target the public works sector for projects, as well as private jobs if needed. Before we even think about bidding on a job, we have AA bonding in place. Financially, we were strong coming out of the gate, and we have been successful in maintaining a strong balance sheet and liquidity. In the public works project we can bid on projects up to $2 million. However, most of our projects have been between $100 thousand to $500 thousand, allowing us the opportunity to target a wide range of projects.

We are always watching our competitors, but we are not critical of them. If they are doing something better than we are, we try to evaluate and learn from our competitors.

We try to pick projects that fit us. We try to avoid falling in-love with an upcoming project because it is high profile or it is a possible “home run.” We are small, so every project is critical to us.

One of the things I am most proud of is the scheduling job our office manager, Cliff Cox, performs. In three and a half years we have not over scheduled. Over scheduling is the fastest way to bring down quality and increase costs to a project.

We also believe in asking our employees their opinions on daily operations, from the guy holding a shovel to the superintendent. You should respect all of your employees. I remember a foreman jokingly telling me to seek people’s opinions, that, “Two knot-heads are usually better than one knot-head.” From time to time, we have been pleasantly surprised by their ideas. But ultimately, you must make the final decision, and be decisive with it. 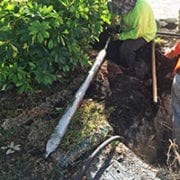 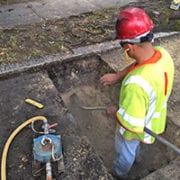