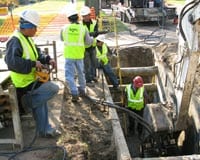 The versatility and capability of the static pipe bursting method continues to accelerate thanks in large part to contractors like Murphy Pipeline, Inc., Jacksonville, Fla., that continue to push the method to achieve better, more effective results. A recent project in Livonia, Mich. demonstrates this point.

The city of Livonia needed to replace approximately 23,000 feet of its undersized and deteriorated 6- and 8-inch cast iron and ductile iron water mains and the installation of about 4,000 feet of new main. This aged and undersized system had a history of breaks, along 14 different streets.

Engineering firm Hubbell, Roth & Clark, Inc. (HRC), Detroit, was called in to develop the project to upgrade the system. According to HRC, the construction contract documents were developed so they would allow the trenchless and traditional approaches to be bid against each other, thereby allowing the bidding process to determine the most cost-effective means of replacement.

HRC project manager Dan Mitchell said, “Ultimately, a trenchless technique called pre-chlorinated pipe bursting proved to be the low-cost alternative. During the method, pressure and disinfection testing are completed above ground, eliminating the installation of a temporary water distribution system, as well as the significant excavation associated with the traditional open-cut approach.”

The city of Livonia receives water and wastewater services from the Detroit Water and Sewerage Department (DWSD). According to its Web site, the DWSD is the third largest water and sewer utility in the United States. With its beginnings dating back to the early 1800s, the department’s original water system included wooden logs, brick and stone. Today, the utility has a 1,079-square-mile water service area and provides water services for approximately one million people in Detroit and three million people in the surrounding areas of southeastern Michigan. Wastewater service is provided to a 946-square-mile area that includes almost 35 percent of the state’s population. 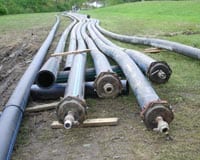 The city of Livonia, Mich., needed to replace over 23,000 feet of its deteriorating water system. Static pipe bursting with pre-chlorinated HDPE was ultimately the method of choice for this project.

With a population just over 100,000, Livonia is the eighth largest city in Michigan. Its average daily water demand is approximately 16 million gallons for its 38,000 residential, commercial and industrial users. As typical with many communities in the Detroit area, Livonia’s infrastructure was constructed in 1940s, 50s and 60s and is beginning to deteriorate. A majority of the system was composed of cast iron and ductile pipe.

With the 23,000-foot pre-chlorinated pipe bursting project now approved, Murphy Pipeline president Andy Mayer would need to rely on years of experience to complete it as efficiently as possible.

Mayer came to the United States from England almost 10 years ago and couldn’t believe what he saw, a country with an infrastructure that was deteriorating and an opportunity to change that. Mayer said, “We came over in 2000 to look at a sewer project in Jacksonville, Florida and ended up getting involved with the AWWA. I gave a presentation that year at the AWWA conference on pre-chlorinated pipe bursting and through a series of events, the method received approval in Florida.

“Then we looked at the marketplace; and the infrastructure of North America was falling apart. I’m looking at the people that put the man on the moon and [created] Silicon Valley and control the computer world, but the basics of life were still in the ground being neglected. So in a way, I looked at it as an opportunity that far outweighed anything I could have dreamed of and hence Murphy Pipeline was formed; and we’ve really been the pioneers of pre-chlorinated pipe bursting in North America for the past nine years.” 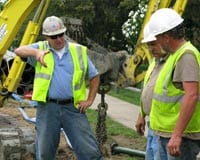 The Livonia project represents the largest pre-chlorinated pipe bursting project in North America. Murphy Pipeline president Andy Mayer (pictured left) has been a pioneer of the process first in England and now in the United States.

According to Mitchell, pre-chlorinated bursting is a multifaceted procedure. He said, “Pre-chlorinated pipe bursting utilizes HDPE pipe and entails the pre-assembly and testing of approximately 300- to 500-foot lengths of pipe above grade at a nearby staging location. Once the pipe is proven to be sound by the pressure and disinfection testing, a series of small excavations are made and the new pipe is pulled into place by bursting the existing main. A post-chlorination and flushing of the main is then performed and the new line is connected into the distribution system. Ultimately, all services are connected into the new main and the surface area is backfilled to preconstruction grade. The entire process is completed within a single day, 7 to 10 hours, thereby minimizing the disruption to area residents.”

According to TT Technologies pipe bursting specialist, Frank Fresneda, static pipe bursting has come to the forefront of trenchless methods in North America. He said, “Static pipe bursting is quickly becoming one of the most preferred methods of pipe rehab and replacement. This has really come about for two main reasons. First, the versatility method really appeals to contractors and engineers alike. It provides multiple solutions for projects. Second the reliability and effectiveness of this trenchless method is very attractive. It has established a solid project history here in the U.S. and that means a lot when choosing construction options.” 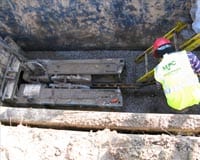 The Grundoburst features patented QuickLock bursting rods that are securely linked together, not screwed together, reducing torque and speeding the installation and breakdown process. Crews burst an average of 470 feet per day.

Patented Quicklock bursting rods are linked not screwed together like traditional drill stems or other static systems. This system speeds the installation process as well as the breakdown procedure. The rods can be quickly removed one at a time at the exit pit as bursting is in operation. While HDPE is commonly used, new techniques and technologies are allowing contractors a choice when it comes to product pipe. According to Fresneda the fact that static pipe bursting can be used to install a variety of pipe materials has really expanded the methods reach.

Fresneda said, “Over the last several years TT Technologies, along with some partner contractors have developed techniques to allow for the use of a range of product pipes with the static bursting method, including ductile iron, PVC, specially designed clay and steel. HDPE is still used as well, and, now, pre-chlorinated HDPE has made the method even more versatile. Contractors, engineers and municipalities have been very receptive to the continued growth of the method, making static pipe bursting a good choice in many instances. People like Andy Mayer are the leaders in the industry, taking the method to places it’s never been before. Plus, they’re great to work with.”

For the Livonia project, HRC identified and grouped 16 priority areas into five separate project areas. As part of the specifications Murphy Pipeline crews could not begin installing water main in a new project area until final restoration was under way in the previous area. This helped minimized the time residents were disrupted by construction.

Launch and exit pits measured approximately 5 feet wide by 12 feet long. Crews positioned pits as close as possible to proposed valves or hydrants, to limit the amount of total excavation. Typical pit depths ranged between 5 and 6 feet. Temporary shoring and bracing was also used throughout the project and open areas were fully surrounded with construction fencing. 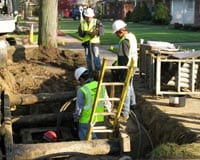 The project was divided into five separate areas. In order to limit disruption Murphy Pipeline crews could not begin working on the next project area until restoration work was underway in the previous area.

For a typical bursting run, once pits were identified and prepared, Murphy Pipeline crews positioned the Grundoburst in the exit pit and prepared to pull in the 300-foot to 500-foot segment of pre-chlorinated 8-inch HDPE. Residents within the immediate service area of the installation only experienced a 6- to 10-hour interruption in water service before being reconnected. Crews typically began preparations around 7 a.m. and by noon the new pre-chlorinated HDPE was in place. Usually between 3 p.m. and 5 p.m., residents were reconnected to the water system.

Mitchell said, “Although this process was approved for water mains in 2005, this was the first successful pre-chlorinated pipe bursting project in Michigan. The results have been good. Even though it took six months longer than anticipated to award the contract, the work was completed on schedule. Furthermore, the cost savings to the city by using this technique were significant, enabling them to repair more pipe than originally anticipated.”

Mayer said, “Even after millions of feet of pipe personally [installed], I still get a warm fuzzy feeling when I look in the ground and see that pipe going in. And I wonder why the technology isn’t used more widely. This is a great technology. I’m not saying it’s the only technology. But municipalities save money with it and with the economy the way it is, cost savings are very important. We can definitely offer that, along with speed, efficiency and minimal disruption.”