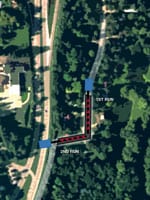 The Tomasini crew divided the project into two (2) 300-ft runs. The main was located in a small easement shard be several homes.

Cast iron water mains have been used to carry water for hundreds of years. The first recorded uses of cast iron pipe date back to the 1500s. In the United States the pipe has been widely used since the 1800s. But while cast iron pipe has been amazing successful throughout most of world, in certain areas and instances, it has a propensity to deteriorate. This dilemma poses a great challenge for utilities throughout the United States.

As utilities across the country search for economic solutions for replacing or rehabilitating deteriorating cast iron infrastructure, a water utility in Wisconsin is replacing pipe. The Brown Deer Water Utility has been plagued by failures of aging cast iron water mains. The deteriorating mains have resulted in a substantial number of breaks over the last 30 years. While the utility has opted to repair mains with stainless steel repair clamps and ductile iron sleeves, the cost of repair compared to number of breaks led utility officials to look at alternatives, including replacement.

At issue for Brown Deer Water Utility Superintendent Marty Glodoski was what type of replacement to use for their next project, the Kildeer Court watermain. Glodoski said, “The 12-inch transmission main was located in a 20-ft easement, a drainage swale between several homes. We faced underground utilities as well as overhead power lines and telephone poles. It was a very tight space and an open cut solution was not very feasible. So we looked for a trenchless solution.”

The AWWA is, as the organization’s vision statement reads, dedicated to safe drinking water. A good portion of their activities is related to the evaluation and promotion of new technologies that help meet that goal. Members of the AWWA include everyone from engineers and scientists to manufacturers and municipalities.

TT Technologies pipe bursting specialist Bill Brennan said, “We see a lot of value in the work the AWWA does. They are very eager to learn about new technologies that can help improve water infrastructure replacement. We have presented at numerous educational sessions and always try to be available to support their activities. It’s a great organization.”

Glodoski said, “We are very active in the AWWA and support the Research Foundation. They have been sponsoring projects using pipe bursting to replace water mains throughout the country. We attended an AWWARF technology transfer workshop in Illinois where they highlight some success stories using pneumatic pipe bursting. But we were concerned about how the repair sleeves on our existing main would affect the success of the pneumatic bursting process. That’s when we looked at the static pipe bursting option.”

With the recent introduction of new hydraulically powered static pipe bursting system, contractors now have the ability to split and replace ductile iron, steel and lined pipes, as well as pipes with ductile iron and steel repairs.

Brennan said, “The bladed roller configuration is an essential part of the Grundoburst’s success. The specially designed bladed rollers actually split the host pipe instead of ripping or tearing it. This is a clean process and prevents potential damage to the product pipe.

“Patented Quicklock bursting rods are linked together, not screwed together like traditional drill stems or other static systems. This system speeds the installation process as well as the breakdown procedure. The rods can be quickly removed one at a time at the exit pit as bursting is in operation.”

According to Glodoski, the old cast iron system suffered numerous water main breaks. Most of the breaks can be attributed in some fashion to the electrolysis of the unprotected cast iron mains. Glodoski said, “When you’re putting a lot of iron in the ground and connecting a lot of copper services, it creates a big underground battery. It’s kind of like electroplating in reverse. And when there is a good deal of water or moisture in the soil, it conducts current better, speeding up the process.

“The problems seem to be at the worst with cast iron pipe from 1950s and ‘60s. Cast iron pipe before that was pit-cast, really heavy walled pipe. Some of that is still in the ground, over one hundred years old and still works well. But the pipe that was centrifugally cast has a much thinner wall. Weaken it a little bit, and it will break.”

Amazingly, the actual water carried in the pipes also contributes to Brown Deer’s situation. Glodoski said, “Lake Michigan is our main water source and it changes temperature really fast depending on the wind direction. It can go from 70 degrees Fahrenheit down to 45 degrees Fahrenheit in a day. That temperature swing can cause breaks, but ultimately the pipe was weakened first by the corrosion.” For years the utility has been repairing the breaks. How the repairs materials would effect bursting efforts concerned Glodoski.

The Kildeer Court area was identified as a high priority area for total main replacement. Dealing with as many as 45 water main breaks, system-wide, a year, the Brown Deer Water utility has used a wide range of techniques to repair the mains. This was true of the Kildeer Court section as well.

Glodoski said, “The concern about this main was we had a lot of repairs on it. We used solid sleeves, ductile iron, steel and even some large cast iron sleeves for repairs. This main actually had six solid repair sleeves on it. And then we had some other repairs where we used large stainless steel repair clamps. To try and break the old iron pipe and all that stuff is difficult. I really wasn’t sure that even the static bursting was going to do it.”

This was the first time the D.F. Tomasini crew had used static bursting equipment. D.F. Tomasini Project Manager Bob Thogersen sees the potential of the trenchless application. He said, “When you’re replacing a line under a roadway and you can save half the road way by using a trenchless method and just digging up tap holes to reconnect laterals, that’s value.”

The D.F. Tomasini crew divided the 600-ft main into two 300-ft sections. A launch pit was dug between two telephone poles where the sections created a 90-degree change in direction. An exit pit was dug at the end of each section.

After completing a temporary water bypass, the crew positioned the Grundoburst in the first exit pit and connected it to a hydraulic power pack. The crew then began inserting the Quicklock bursting rods through the host pipe and into the launch pit. A flexible guide rod attached to the front of the first rod was used to help ensure the smooth installation of rods.

Once at the launch pit, the Tomasini crew removed the guide rod and attached the bladed rollers, bursting head, expander and new HDPE. The entire configuration was then pulled back through the host pipe by the hydraulic bursting unit. The power of the Grundoburst combined with the specially designed bladed roller was able to burst the pipe and all repairs. The first 300-ft run of12-inch HDPE was installed without incident.

Crews then set to work making lateral connections with electro-fusion couplings while the Grundoburst was re-positioned for the second run. The second run went equally well, with no complications from the existing repairs. Both runs averaged one hour each.

The use of static pipe bursting was a perfect match for the Kildeer Court project for several reasons. First, the trenchless method allowed the utility to replace a water main located in a very difficult easement. Second, the static equipment used utilizes specially designed bladed rollers, capable of overcoming cast iron, ductile iron, and steel repairs. And finally, because the new is pipe HDPE, it will not be affected by the conditions that caused the deterioration of the cast iron pipe.

Thogersen believes that education will help grow the use of pipe bursting. He said, “Technology today is moving along so quickly. Projects like this help everybody learn and see what this technology has to offer and how we can utilize that knowledge in the future.”

According to Glodoski, the project provided a great opportunity to gain practical pipe bursting experience. He said, “We worked right along side the Tomasini crew. It gave us the chance to get out in the field with the bursting equipment and get a feel for how the process works. That experience will help us tremendously when planning out future bursting projects.”

The Brown Deer water utility is currently planning additional bursting projects for the summer of 2002. 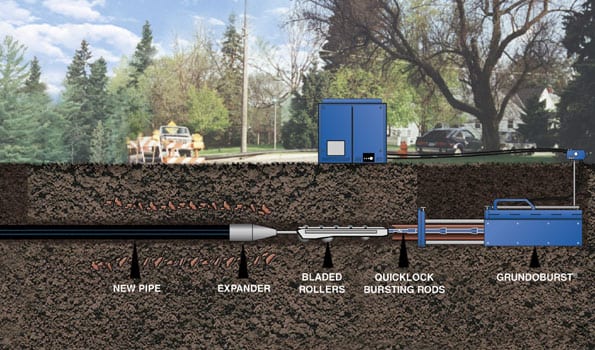