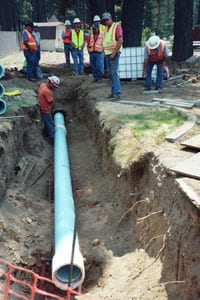 Many utilities around the country are so invested in certain pipe materials that when pipeline replacement projects come up, it is very difficult for those entities to consider other piping materials. Others are simply looking for choice. For many years, this has been a core issue with pipe bursting technology that has been closely tied to high density polyethylene pipe (HDPE). While there is a high level of familiarity with the application of HDPE pipe in pipe bursting, there is still considerable interest in other pipe material options, by owners, engineers and contractors.

Various pipe manufacturers are working diligently with pipe bursting equipment developers and manufacturers to find real world ways to adapt their pipe products to pipe bursting installations. It takes the extensive experience of these parties to find suitable ways to install what is best described as sectional, gasketed pipe in the pipe bursting process. There are many factors to consider in what is necessary for these pipe materials to work in pipe bursting applications.

Static bursting allows for the use of several different product pipes including the restrained joint PVC pipe that was used for the South Tahoe Public Utilities District.

In addition to the product pipe issue, for many years bursting and replacing steel pipe was not possible. When static bursting equipment was introduced to the North American market several years ago that changed. Numerous static bursting projects with steel host pipes have been successfully completed since then.

The project for the South Tahoe Public Utility District (STPUD) required bursting and replacing a steel water main with a C900 restrained joint PVC. Pacific Liners, Vacaville, CA, was contracted to complete the project. Sean McIntyre, Pacific Liners Project Manager said, “Pacific Liners has many years and thousands of feet of experience with pipe bursting, but STPUD’s water main project was a challenge. We have always been interested in projects that demand creativity and ingenuity to get the job done, and our experienced crew led by foreman Tom Hall made this particular project run exactly to plan.”

A Grundoburst 1000G static pipe bursting system from trenchless equipment manufacturer TT Technologies, Aurora, Ill., was selected for the project. According to TT Technologies Pipe Bursting Specialist Collins Orton, bursting steel as well as ductile iron is a significant advancement in trenchless pipe replacement. He said, “I see this technology having a great impact on the gas and water industries. There are miles of steel and ductile iron lines throughout North America that are undersized and/or deteriorating and need to be replaced. Some are even required by legislation to be replaced. Being able to replace and upsize these lines without digging them up is a benefit to everyone. And now, with the ability to utilize various product pipe materials with the static pipe bursting application, the process is even more valuable to utilities, contractors and engineers.”

According to the utility’s Web site, STPUD has been providing water and sewer services to the residents of South Lake Tahoe since 1950. It is a two-time recipient of the U.S. Environmental Protection Agency’s Waste Water Treatment Plant of the Year award.

The district’s water system consists of over 14,000 residential connections and over 660 commercial and government sites. These customers are served from 13 active well locations. The collection system consists of 420 miles of sewer lines, 39 lift stations and over 17,000 connections. The district also boasts one of the first tertiary water reclamation plants, established in 1965.

During the static bursting process, specially designed bladed rollers are pulled through an existing line by a hydraulically powered bursting unit. As the bladed rollers are pulled through, they split the host pipe. An expander attached to the rollers forces the fragmented pipe into the surrounding soil while simultaneously pulling in the new pipe.

The bladed roller configuration is an essential part of static bursting success for steel and ductile iron pipe materials. The specially designed bladed rollers actually split the host pipe instead of ripping or tearing it. This is a clean process and prevents potential damage to the product pipe.

Orton said, “The old pipe must be fractured or split, the remaining fragments compacted in to the surrounding backfill, and the new pipe pulled/pushed in before the temporary annular space, created by the pipe bursting tool, begins to collapse and get a firm grip on the new pipe. Once the soil has a firm grip on the pipe, it is very difficult if not all but impossible to continue to move the column of new pipe forward. In this case, the existing steel pipe is split at the invert then expanded to make room for the new pipe and pipe couplings. Ultimately the split pipe acts like a shroud over the new replacement pipe.”

After positioning the Grundoburst 1000G in the exit and placing the bursting rods in the existing steel water main, bursting was ready to begin.

C-900 PVC pipe with a restrained joint utilizes a spline and groove assembly that is very strong. This pipe is assembled and pulled much the same as restrained joint ductile iron pipe. The bell and spigot restrained joint configuration requires that the pipe be pulled backwards (spigot end first). This allows each consecutive bell joint to act like an additional pipe bursting expander. The pipe is assembled one joint at a time in the launching pit and pulled one joint at a time. The joints are made up quite quickly, usually in just a couple of minutes.

Only static pipe bursting systems should be used due to the stiffness of the pipe. The connection of the PVC pipe to the bursting head consists of an adapter using the pipe and a steel pulling head of the same configuration as the pipe joint. The cartridge loading method can be used.

Orton said, “The advantage of this cartridge loading approach is there is no need for a pipe staging area. The new replacement pipe can be unloaded, as needed, from a truck and at the end of the day there is no pipe left on site. This process requires the pipe bursting system to start and stop repeatedly. Each joint is made-up in the launch pit, pulled in and then the stopped while the next section of pipe is lowered into the launch pit and assembled to the previous joint. However, this type of pipe appears to be flexible enough to join together before a pipe burst and inserted through the launch pit with minimum bending. Of course the launch pit would need to be of adequate length to accommodate this approach successfully.”

Pacific Liners was contracted to replace a 10-inch diameter 350-foot steel water main with 10-inch PVC through static pipe bursting. The trenchless application was chosen because the water main ran underneath a decorative garden.

For the project in South Lake Tahoe, the Pacific Liners crew needed to replace a 10.00-inch OD, 10-gauge (0.1406-inch thickness) steel water main with 10-inch (11.10-inch OD) restrained joint C-900 PVC pipe. The existing 350-foot steel water main was being replaced as part of a larger water main rehabilitation project. Because the line ran through a decorative garden area, open cutting was not an option. Pipe bursting was the method of choice for this particular project.

McIntyre said, “Pacific Liners showed up on site on a Monday and set up the 1000G bursting unit. The following day the line was CCTV’d to find out if there were any bends in the line that would prevent the bursting rods from making it through the pipe. We found that there was a 45-degree bend located approximately six feet from the already prepared launch pit. The launch pit was extended an additional six feet, the elbow was removed and the rods were then pushed through the pipe.”

During the static bursting process, specially designed bladed rollers are pulled through the host pipe. The bladed roller configuration is essential to the success of the process and also makes replacing ductile iron and steel pipe possible as well.

A 4-foot by 25-foot launch pit was dug at the beginning of the run and another 8-foot by 20-foot exit pit 350 feet away. The bursting unit was positioned in the exit pit and connected to a hydraulic power pack. The crew then began inserting the QuickLock® bursting rods through the host pipe and into the launch pit. A flexible guide rod attached to the front of the first rod was used to help ensure the smooth installation of Quicklock rods.

McIntyre said, “The rods went through with such ease that we decided to proceed with the burst that same day. Three and a half hours later the ten-gauge steel was replaced with C-900 PVC without disrupting the decorative garden.”

According to Orton, several considerations need to be addressed when choosing various pipe materials with static bursting. He said, “The specified pipe and specific pipe bursting equipment should have a proven history similar with the intended application and service environment, as well as data that reflects third-party testing, to substantiate suitability of the pipe by physical property and chemical resistance claims of the manufacturer. The pipe bursting equipment system(s) to be used should be proven to be capable of the required pipe replacement. The structural condition of the existing pipe also needs to be evaluated and point repairs identified. CCTV is a very useful tool in identifying many pipe defects.

Also, when evaluating a bursting project, it’s important to recognize that, in this case, the three-and-a-half hours includes pipe joining time. In the cartridge loading process you need to stage the pipe sections at the launch pit. Each individual section of pipe is brought into the launch pit and then the sections are joined and the spline assembled to form the completed restrained joint.”

McIntyre said, “Pacific Liners has used the Certa-Lok restrained joint C-900 PVC product from CertainTeed in the past on sewer bypass projects. This was the first time that we had the opportunity to use it for pipe busting and we would have no issue with using it again. Once we found our rhythm of fitting the pipe the installation moved quite rapidly. The pipe proved to be a very robust product that withstood a substantial amount of pressure and came out perfect on the post CCTV inspection.”