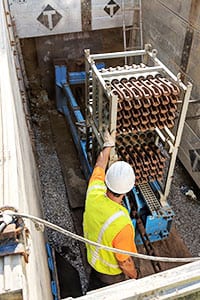 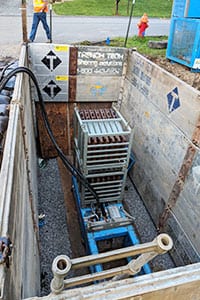 The Penn Township Sewage Authority (PTSA), Penn Township, Pennsylvania is taking on that old familiar problem of inflow and infiltration (I&I) with strong dedication to trenchless technology. The township has a population of 19,600 and covers a total area of approximately 30 square miles. In 1994, it was placed under a Corrective Action Plan (CAP) to eliminate sewage overflows and basement backups.

He said, “About 5 years after the Authority tried to mitigate problems in a select group of sewer mains, they realized through flow monitoring that the efforts had failed and did not solve the issue. So, the township did a pilot project to look at pipe bursting.  That project ended up being a success and reduced the amount of flow into the system. That laid the groundwork for a 20-year pipe replacement plan, which includes pipe bursting, along with some traditional open cut.”

It wasn’t until the PTSA decided to do additional pipe bursting and bring the work in-house that the program began to take shape. The PTSA was able to perform the work, save money and eliminate I&I. For the pipe bursting the PTSA utilizes a Grundoburst 800G static pipe bursting system from TT Technologies. 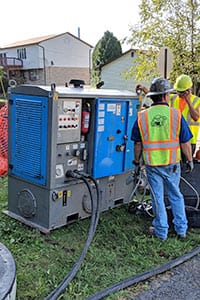 The township found renting the static pipe bursting equipment to be the most fiscally sound for their needs. Here crews connect the hydraulic power unit.

As its service area has grown and changed over the past 60 years, the PTSA has continued to meet the changing needs of the community. Originally incorporated in 1956 as an Authority under the Municipal Authorities Act, it operates independently of the Penn Township Commissioners, however the members of the Sewage Authority Board are appointed by the Penn Township Board of Commissioners for five-year terms.

The organization can establish rates and plan, construct and fund projects related to providing municipal sewer service to the residents of Penn Township. Currently providing sanitary sewer services to approximately 5,724 customers throughout Penn Township collection and conveyance system consists of 83 miles of sanitary sewer lines ranging in size from 8 inches to 24 inches in diameter, 3,000 manholes and 17 pumping stations. The PTSA does not operate a treatment plant, however. Wastewater treatment services are provided by a regional sanitary entity.

PTSA maintains a staff consisting of three office clerks, five field workers, one Field Supervisor and a Manager. The PTSA Manager oversees the overall day-to-day operation of the Authority. The staff, including the Field Supervisor, reports directly to the manager.

After being placed under a Corrective Action Plan, the PTSA had to develop the plan that would eliminate sewage overflows and basement backups. This also led to the establishment of the Penn Township Sewage Authority as an active authority in 1997, becoming responsible to complete the CAP and also update and maintain the system into the future. 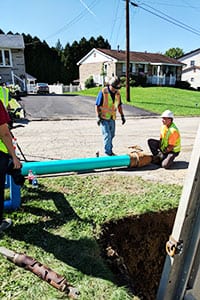 Static pipe burstings allows for the use of a variety of product pipes. Penn Township has been using Certa-Flo® PVC pipe on numerous bursting projects.

Schultz said, “Renting can really make a difference, especially for those contractors or municipalities that are just getting into trenchless. Rental is a great way to get a start in the industry. Renting trenchless equipment is a small investment that can help contractors get a foot hold in the industry or help get an in-house pipe bursting program like the one that PTSA has developed get started on the right path. The option to rent should also come with the same level of service and support that you would receive if you were buying that equipment outright.”

The PTSA now does all pipe bursting and open cut projects in house. Money is budgeted every year for pipe bursting and the long-range plan is to replace 2,000 feet at a minimum each year for the next 20 years. Bursting is the preferred method because it is faster, less disruptive to the neighborhoods and also significantly reduces the cost of restoration.

While pneumatic pipe bursting has become a widely accepted and utilized trenchless pipe replacement method, static pipe bursting has gained tremendously in popularity over the years and is the method of choice for the Penn Township Sewage Authority. In the static process exit and launch pits are used in the same way they are for pneumatic bursting.  First, the hydraulic bursting unit is positioned in the exit pit. Then the bursting rods are pushed through the host pipe and into the launch pit.

The entire configuration is pulled back through the host pipe by the hydraulic bursting unit. The bladed rollers split the existing pipe, while the bursting head and expander displace the fragmented host pipe into the surrounding soil. The new pipe is pulled into place simultaneously.

Typical bursting runs range between 270 and 300 feet in length and average 1.5 to 2 hours to complete.

Priority for determining pipe bursting projects is established annually through extensive flow monitoring. Once a segment is identified, the lines and laterals are televised in the selected replacement area. All manholes are also replaced within the area. Pipe bursting equipment rental is scheduled once the next area for pipe bursting is designated. A recently completed project in the Sunrise Neighborhood included bursting and replacing 2,500 feet of existing 8-inch terra cotta sewer main to 8-inch Certa-Lok® PVC pipe.

Size for size replacement is typical of most PTSA bursting projects with a few featuring small upsizes. Ground conditions consist of challenging rocky soils. For the Sunrise project, crews established 14-foot trench boxes for the launch pits and 16-foot trench boxes for machine pits. With sewer mains at depths of 17 feet or more, constant dewatering was required. Typical bursting runs ranged between 270 and 300 feet in length and average 1.5 to 2 hours to complete.  Crews pulled back 10-ft sections of PVC at a time during bursting operations.

According to Schultz, crews implemented time and disruption saving techniques with the static pipe bursting equipment. He said, “Depending upon specific jobsite layouts, the hydraulic bursting unit can be positioned in the middle of a main line bursting run. This allows PTSA crews to complete a bursting run in one direction, turn the machine 180 degrees and burst in the other direction. It’s a nice disruption mitigation technique, not to mention a time saver.  In optimal conditions crews can even rod the next run at the same time the first on is being completed by feed the bursting rods out of the back of the machine and into the next pipe segment directly.”

PTSA also uses restrained joint PVC to reduce the amount of room needed to stage the pipe older neighborhoods with narrow lots, further limiting disruption to residents. Once the bursting was finished, Inserta Tees® were used to reconnect the laterals, and final restoration work was completed.

Schultz said, “This is a good example of what an in-house program can be when properly planned and implemented. The Penn Township group really has a handle on the process and is making great strides towards eliminating its I&I problems.”