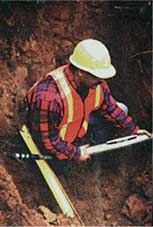 North States Utility Contractors of Eagle River, Wisconsin, has a simple business philosophy: Provide only top-quality processes, products and service to achieve the highest level of customer and employee satisfaction.

As an important part of its pledge of quality assurance, North States has invested in an arsenal of trenchless piercing tools for the installation of new gas lines beneath roads, rails and landscaping. “We carry piercing tools on all our trucks,” says Bob Tijan, president of North States. Each truck is also equipped with an air compressor to power the pneumatic tools.

North States encounters a wide range of soil conditions when trenching and performing bores. Elements include variations and combinations of rock, clay, gravel, sand and loam. In areas where a boring tool is not required, a plow is used to install lines.

“Of the 23 crews we have out every day installing electric and natural gas lines, at least one will be using piercing tools,” say Tijan. “We use piercing tools where there is terracing, fancy lawns and landscaping, as well as under pavement.”

In his 20-plus years in construction, Tijan has used all brands of piercing tools. He relates the story of how he first became familiar with Grundomat tools, manufactured by TT Technologies, Aurora, Illinois.

“We needed to perform an 11-inch bore beneath a railroad track and we had no tool,” Tijan explains. “None of the companies we had been working with could offer a tool that could handle this job. Then, TT’s Rich Prosser showed up to demonstrate a 7-inch-diameter Grundomat with an 11-inch-O.D. expander.”

The soil conditions beneath the tracks were difficult for boring, consisting of gravel and rock, but the Grundomat quickly performed the bore.

About the same time, Tijan’s crews encountered a problem when attempting to install a gas service beneath a state highway. Their smooth cone piercing tool became stuck in rock soil. Crews trenched and retrieved the tool, but that didn’t solve their problem. Again, TT Technologies’ Rick Prosser came to the jobsite. This time, he was armed with a 4-inch tool. And again, the reciprocating stepped-cone head tool did the job.

A Head For Accuracy

The tiers of the tool’s stepped-cone head act as a stabilizer through an assortment of mixed soils. The reciprocating chisel tip functions like a pneumatic hammer, breaking up obstacles in the path of the tool. This same action creates a pilot bore within the bore, ensuring the proper trajectory, even through difficult soils.

To aid in a successful bore, TT Technologies offers an inline lubricator. A pre-established amount of specially formulated biodegradable pneumatic tool lubricant mixes with the compressed air as it enters the piercing tool to improve tool performance and reduce maintenance.

Where Tijan has encountered situations not conducive to horizontal boring, such as partially frozen earth in a Wisconsin winter, North State’s use of piercing tools is of benefit not only for the utility, municipality or homeowner, but to his company as well.

“Piercing tools cut restoration time,” he says. “That’s a main reason why we use them.”

Auger Boring In Tandem With Pipe Rammers
Scroll to top