Allen Frawner of K&A Boring and Tunneling averages over 300 bores a year with his Grundomat piercing tools. Most of the boring is for gas mains and services under roads in tough Alaskan soil conditions.

From last mile installations to niche applications these highly effective and versatile tools are making an impact again. Throughout the United States, underground contractors have been rediscovering a classic piece of trenchless technology, the piercing tool.

A resurgence of use in piercing tools can be attributed to several factors. According to piercing tool specialist Brian Hunter, TT Technologies, the reasons vary from user to user. He said, “I think many contractors that have been using piercing tools never stopped. New contractors are discovering that these tools are extremely versatile, affordable and productive. The return on investment from a piercing tool can be tremendous. There are many uses for piercing tools in addition to traditional horizontal boring and as more contractors realize this, they are integrating them into various facets of their services.”

That’s exactly what two very different companies, in two very different locations have done. Coble Trench Safety, headquartered in Burlington, NC (with offices in Raleigh, Charlotte, Greensboro and Richmond) is a premier rental company specializing in trench shoring and trench safety with a service area that includes North and South Carolina, Tennessee, Virginia and Maryland. They have found an interesting way to help their customers become more efficient through a unique piercing tool application. K&A Boring & Tunneling, Anchorage, AK, on the other hand, puts their piercing tools to work everyday, boring under roads and highways throughout the Alaskan wilderness.

Out Of The Trenches: Case Study #1

In addition to horizontal boring, Frawner has used his piercing tools for HDD Assist applications, methods that were developed by contactors like K&A Boring and Tunneling and trenchless equipment manufacturer TT Technologies, Inc.

For Brett Sondergard, General Manager Coble Trench Safety the piercing tool helps make his customers become safer. With a large portion of the sales and rental powerhouse’s main focus being trench safety, the company has developed into the leader in trenching solutions for a wide range of construction applications. Sondergard said, “We will do the engineering and design of the trench application and then supply the trench box, steel plates, pipes and all other equipment needed to create the trench support.”

According to Sondergard, a majority of his clients are underground contractors dealing with sewer and water issues, as well as other infrastructure related activities; which means that trench sizes can range from small, for a moderate pipe bursting application, for example, to very large, like one for a building foundation. It is the large trenches that often require what’s referred to as a beam and plate trench system and that’s where the Grundomat piercing tool comes in.

Sondergard said, “Smaller trench boxes have what we call a spreader that goes across the middle for support. On larger trench boxes we can’t use that spreader for support and have to go to what’s known a cantilever system. You have to drive something far enough into the ground to counteract the amount of pressure above the top of the trench. Typically it’s steel pipe that’s placed in the ground to support the steel panels that make up the trench wall. For average soil conditions the general rule of thumb is to go one and half times the height, deep. For example, if you’re looking to shore 10 feet, you need to go 15 feet into the ground. One of the longest walls we’ve done was over 120 feet in length.”

For constructing the large trench shoring, Sondergard says they supply 8-inch diameter Schedule 80 steel pipe. In order to get the 8-inch diameter steel pipe in the ground to the required depth for a specific project, contractors have several options. He said, “The first is to use an outside entity to place the pipe either through a pile driving type application or through a drilling type application. The problem with those methods is that they can be both time and cost prohibitive. When you have to bring in another contractor to do that work, you end up working around their schedule. What we’ve done is offer our clients a means to install the pipe themselves with the Grundomat piercing tool.”

What Sondergard is providing, is a way for his clients to utilize the piercing tool as a pipe rammer and vertically ram the 8-inch diameter pipes into the ground. Hunter said, “Configuring the Grundomat for ramming operations is fairly simply. The tool is fitted with a pipe-driving adapter. In Coble’s case, crews are using 5.75-inch diameter Grundomat P-145 P in a vertical application. Once crews secure the pipe ramming adapter in the 8-inch pipe, the tool is mated and secured with the pipe rammer in the horizontal position. The entire configuration is then lifted and positioned vertically with the help of an excavator. Ramming times vary by depth and soil conditions, but utilizing the piercing tool as a rammer from this application is much faster and less expensive than trying to coordinate with an outside entity to install the pipes.”

Sondergard estimates clients can save anywhere between 25 and 50% in time and costs by utilizing the piercing tool ramming method over other installation options.

From North Carolina to Alaska, the terrain, climate and working conditions change dramatically, but the efficiency and effectiveness of the piercing tool remain constant.

Frawner owns and operates an arsenal of Grundomat piercing tools ranging in diameter from 3 inches to 7 seven inches. During the long daylight hours of the Alaskan summer, Frawner has been known to work 20-plus hours a day.

Allen Frawner, K&A Boring & Tunneling founder and sole proprietor, will be the first one to admit that he owes a lot to the piercing tool. In many regards, the quality, accuracy and dependability of his tools have helped him cultivate a great reputation and a list of customers that keep him challenged and working up to 20 hours a day from May to October (the typical construction season in Alaska).

TT Technologies piercing tool specialist Brian Mattson said Frawner is a great study for piercing usage. He said, “Allen gets the most from his piercing tools. He works them day in and day out in difficult terrain. But the results are fantastic. He knows what those tools are capable of and he definitely can push them to their limits.”

Frawner said, “I set a personal record last year. I got up at 5:00 am and drove to Kenai, which is about 150 miles south of here. It turned out to be a 22-hour day, but I was able to complete five 50-foot road bores and drive back to Anchorage. During May, June, July and August it’s pretty much 24-hour daylight. Sometimes you look up and the sun’s in the high noon position and you think, ‘I’m not going home.’ It turns out to be way later than it seems. Ten o’clock pm is early for me to stop for the day.” 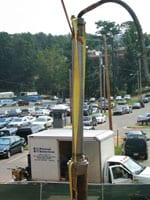 Coble Trench Safety, Burlington , NC specializes in trench shoring and safety equipment. They have implemented a specialized ramming technique with Grundomat piercing tools. This allows their customers to save time and money by ramming in the steel pipes needed for cantilever trench shoring systems.

While time may be on Frawner’s side during the summer months, the soil conditions in Alaska are not. The soils range from sandy to boulder filled and can challenge the toughest equipment. Still, Frawner is able to achieve high levels of production from his Grundomat piercing tools. With eight piercing tools in his arsenal ranging in size from 3 inches to 7 inches in diameter, Frawner has the capability to tackle a wide range of underground boring projects. He said, “On average, I do about 300 bores a year. Probably about 80% of my work right now is gas industry related, putting in anywhere from 6-inch mains down to 1-inch services. Most of the installations are under highways and roads in difficult soil conditions.”

In Alaska, trenchless applications are highly regarded. With many sewer and water systems over 10 feet deep to avoid freezing, any excavation that can be avoided is welcomed. According to Frawner, paved roads are at premium in Alaska, and every effort is made to keep them in tact. This includes utilizing trenchless pipe installation methods whenever and wherever possible. He said, “One example is a gravity sewer bore I did in King Salmon, only accessible by air. If they had to tear up the road in that village, there is no asphalt plant there. The cold patch would have to be barged in around the Alaskan peninsula, into the Bearing Sea, a trip of about 3,000 miles. I was able take a plane and a Grundomat, fly in and do the bore. I just tell them my tool weighs 400 pounds, give me another 500 [pounds] for gear and I’m in there.”

Brett Sondergard, Coble Trench Safety General Manager estimates that utilizing the Grundomat ramming technique saves his customers between 25 and 50% of the cost and time associated with utilizing an outside firm to install the steel pipes for trench shoring.

Mattson said, “While pipe ramming tools are generally associated with the various HDD assist methods that TT Technologies and contractors like K&A Boring and Tunneling helped to develop, on small directional drilling projects, piercing tools can easily be converted to assist with pullback, install a small diameter Conductor Barrel casing or retrieve stuck drill stem or product pipe. Allen has had several experiences with these techniques.”

Frawner said, “On a couple of occasions I’ve used my piercing tools to rescue stuck directional drills, mine and other contractors. One time I was pulling back 6-inch HDPE for a gas project, under a road and got stuck. I took my 7-inch piercing tool, attached it to the back end of the HDPE, gave it a few taps and I got going again. I’ve removed stuck pipe for other people before, and assisted during pullback.”

Despite being able to assist during HDD projects, Frawner prefers using his piercing tools for horizontal boring to anything else. He said, “I’ll use my directional for specific projects, but I prefer the piercing tools. That’s why I work these long hours. I mean when you finish a bore in two hours, you want to get to the next one. I love my job, I sure do.”