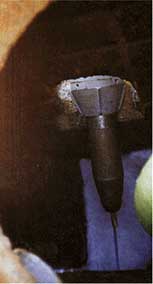 Problem: A collapsed process line threatened to shut down a polyester manufacturing facility.

Solution: A pneumatic pipe bursting process allowed technicians to repair the pipe without any structural damage.

When a process line failed at a Salisbury, N.C., polyester fiber manufacturing facility, an inspection revealed that 8 feet of clay pipe running 12 feet below the factory floor had collapsed.

The plant manager knew the line had to be replaced but wanted to avoid the downtime that would result from open trenching–the standard way to fix a broken pipe. Contractor Harold Hawes, president of Environmental Pipe Corp. (Ruckersville, Va.), suggested using a trenchless pipe bursting system to install the pipeline without destroying the floor.

The Grundocrack Mini-Olympus pipe bursting tool with rear expander is one of 14 bursting tools manufactured by TT Technologies Inc. (Aurora, Ill.) that can be used to replace pipes ranging in size from 4 inches to 48 inches in diameter. It consists of a nomadically operated percussion tool that powers the system and a metal expander that breaks through old pipe and carries new pipe behind it. The expander is launched into the opening of the broken pipe and guided by a steel cable attached to a winch at the end of the pipe. The expander pounds through the old pipe and compacts the fragments into the surrounding soil to create a smooth foundation for the new pipe.

Not only can the technology repair broken pipes with minimal structural intrusion, it also can replace an old pipe with a larger one that will accommodate future growth, Hawes says.

According to Rick Bissonette, a technician at TT Technologies, the technology does not work well with certain heavy pipes constructed of such materials as ductile iron or corrugated steel.

To avoid disturbing operations at the polyester manufacturing plant, Hawes constructed a small launch entrance for the tool and expander through a manhole next to the facility. Preparing for the pipe burst took about three days, Hawes says, and the burst itself took less than two hours.

Costs vary depending on the application, but Hawes say that using the innovative repair method cost the polyester manufacturing facility approximately $33,000. Using open trenching would have cost approximately $100,000, he adds. According to Bissonette, pipe bursting can be a priceless alternative in some cases: How do you put a price on 150-year-old trees that would have to be removed to build a trench in the middle of a highway?