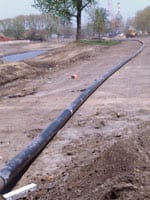 The Utility Solutions crew achieved an amazing level of production on the Seaside Park Renovation project. They successfully completed single, continuous bursting runs of over 960 and 1,000 feet; bursting a total of over 3,000 feet of cast iron water main in just four days.

Beneath the beautiful parks and beaches of Bridgeport, CT a deterioration process has been going on for years. The area’s cast iron water mains have slowly been eaten away by salt water from the Atlantic Ocean. Over the past several years water main breaks have become a more and more common experience in Bridgeport. Water utility BHC Company, Bridgeport, CT, is tackling the deteriorating infrastructure head on, with a large-scale replacement program.

The Seaside Park Renovation Project is one part of the program. Utility Solutions, Shelton, CT was contracted to replace over 3,000 feet of 8-inch cast iron water main.

While the project was not specified as pipe bursting, Utility Solutions Superintendent of Utility Operations Nick Teodosio explained that it was the right choice for the project. He said, “The road that a majority of the water main ran under was being reconstructed. When the project came up to replace the main, the final prep work was already done on the road. Final grading was complete, the curbing was in and it was ready to be paved. No one wanted to upset the road project, so a trenchless method was preferable. In addition, BHC had specified the use of High-Density Polyethylene pipe (HDPE). So I proposed pipe bursting the line and it was ultimately chosen.”

Utility Solutions is affiliated with John J. Brennan Construction (JJB), Shelton, CT, which celebrated 105 years in business this year. Utility Solutions focuses on all types of utility work with an emphasis on trenchless rehabilitation and replacement techniques. Teodosio said, “Utility solutions is something we developed to try and better market the trenchless methods. We felt as though we weren’t marketing it very well under JJB. JJB has been in business so long and does so many things that the trenchless always fell to the side when we got busy.”

Utility Solutions’ repertoire of trenchless methods is impressive. According to Teodosio, a large amount of trenchless experience was gained through JJB. He said, “We’ve been sliplining with HDPE for over 20 years. We have rodding trucks, flushing trucks; we do a lot of pipe jacking and tunneling. We have a lot of underground experience.”

In addition, the company utilizes pneumatic piercing tools, pipe ramming, vacuum excavation and more. Pipe bursting is one of the latest trenchless methods to be added to the Utility Solutions arsenal. With twenty-plus years of experience handling HDPE, pipe bursting was a perfect fit. And judging by the results achieved for the Seaside Park Renovation Project, the Utility Solution’s crews have become proficient at the method very quickly. 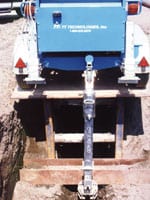 A constant tension, variable speed Grundowinch was used to guide the bursting tool through the host pipe.

BHC Company is a subsidiary of Aquarion Company and serves over 500,000 residents in 29 cities throughout Connecticut. In business since 1857, BHC Company is the largest investor-owned water utility in New England and one of the ten largest in the United States. Over the past several years, the utility has embarked on a system upgrade and improvement program. A history of problems made the water main at Seaside Park a prime candidate for the program.

Since the project took place in a coastal area, the Utility Solutions crew faced a high water table. Even though the existing cast iron main was located only five feet below the surface, the crew needed to de-water the launch and exit pits constantly while working.

The high water table ultimately contributed to the main’s demise. The years of exposure to salt water had taken its toll and the main was deteriorating from the outside, in. Numerous main breaks finally prompted BHC to replace the pipe. This is also the reason BHC specified HDPE as the replacement pipe, in an effort to avoid salt water deterioration in the future.

The main started along the beach and traveled under a storage yard for the mounted division of the Bridgeport police. From the storage yard the main ran underneath the newly set granite curb into thegraded roadway. The Utility Solutions crew set to work on fusing pipe and prepping the tool for the first run.

According to TT Technologies Pipe Bursting Specialist Ric Micellota the tool and configuration used by Utility Solutions is standard gear for high production pipe bursting. He said, “The rear expander tool is a second generation tool. When we began bursting in the late 1970s and early 1980s, straight barrel tools with front expanders were used. They can be removed through manholes or reversed out through the newly installed pipe. Their effectiveness, however, is somewhat limited by soil conditions, length of run and host pipe material.

“Today the rear expander configuration is the one most commonly used in the industry. It provides several key advantages. First, it allows the use of bentonite in conditions that warrant it. Second, the rear expander tool configuration means that a majority of the tool itself is actually in the pipe. This increases bursting power and assists in maintaining line and grade. Utility Solutions achieved an amazing level of production in terms of time and footages on the Seaside Park project.”

Also aiding in the success of the job was the use of a guide head. The guide head is attached to the front of the pipe bursting tool and adds needed tool length. It allows the tool to get into the pipe and break it at its weakest point, the inside.

Cast iron pipe tends to break several feet in front of a standard pipe bursting tool. This causes the potential for two major problems. First, the shards of cast iron pipe are sharp and can actually cut winch lines. Second, pipe fragments can build up making the host pipe impassable. This can cause the tool to change direction and veer off course.

Micelotta said, “Cutting blades can be used in conjunction with a guide head. The blades are welded directly to the guide head. The blades focus the percussive action of the tool and greatly enhance overall bursting power, allowing the tool to successfully burst difficult host pipes, like cast iron as well as many point repairs like PVC.”

Before bursting, the Utility Solutions crew checked the integrity of the existing pipe. Teodosio said, “The pipe was deteriorating from the outside, but we didn’t know what it was like on the inside. We used our rodder truck and rodded the main, then pulled a poly pig through it. The pipe was in pretty good shape on the inside.”

With the integrity of the line in check, the Utility Solutions crew was ready to start bursting the 3,000 feet of cast iron pipe. The crew prepared a launch pit and put de-watering pumps in place. Five hundred feet from the launch pit, the crew positioned the Grundowinch and prepared the exit pit. Again the pit was de-watered. The first burst set the tone for the entire project.

Teodosio explained, “The very first day we started off with a 500-foot burst. The thing went so well, that the next day we decided to try more. We didn’t have a specific exit point in mind; we just placed the winch about 1,200 feet away from the launch pit, hooked up the tool and let it go. About 960 feet down the road, we stopped it because we had a hydrant connection to make. If we didn’t have to make that fire hydrant connection I would have let it keep going.”

On the third day, the Utility Solutions crew out did themselves again, bursting a single, continuous run of over 1,000 feet. The crew finished up the fourth day with the remaining 500 feet. According to Teodosio, bursting times ranged between three and four feet per minute. The final pipe bursting results were impressive- single runs of over 900 and 1,000 feet, and a total of over 3,000 feet in just four days. The BHC Company performed final testing and chlorinated the main before it was put back in service.

The project received great reviews from everyone involved. Teodosio said, “We were very pleased with the results. And we look forward to more bursting. We have several pipe bursting projects lined up including a sewer line burst at a depth of 22 feet. I really think pipe bursting can make a big impact in the New England area in the near future.” 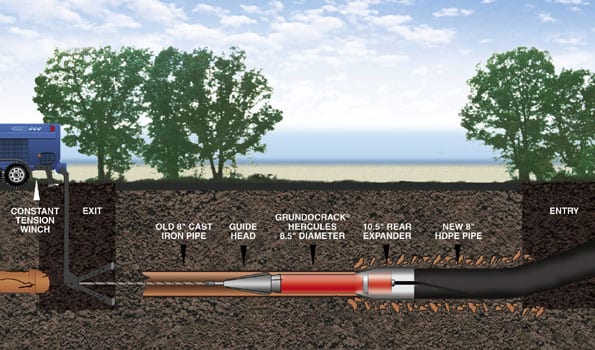