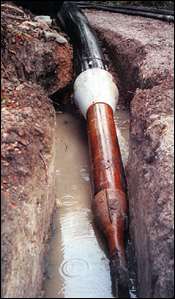 The Grundocrack Goliath enters the launch pit for the first run of 440 feet. Fourteen-inch HDPE pipe was used as a bypass, paralleling the run.

When the town of Hillsborough, California needed to replace its aging sanitary sewer system, the project received a tremendous amount of scrutiny. Sections of that system run parallel to large Hetch Hetchy water transmission mains. In addition, part of the system is located in an environmentally sensitive area along the San Mateo Creek. So not only was the project closely, so was the pipe replacement method the town chose to replace the ailing system, pipe bursting.

The Hetch Hetchy watershed is the main source of water for the city of San Francisco and surrounding areas, supplying over 85% of the area’s water. Water is transported from the watershed, located in Yosemite National Park, through large diameter water transmission mains, ranging in size from 49-inches to 79-inches. The San Francisco Water Department is understandably protective of this vital system. Hillsborough is located just south of San Francisco. Recent flow studies showed that the gravity fed sanitary sewer system was no longer able to meet the capacity needs of Hillsborough’s 11,000 residents. As a result, the town hired Carollo Engineers, P.C. of Walnut Creek, California to design capacity improvements for their system. Carollo Engineers is an environmental engineering, consulting and design firm experienced in cutting edge trenchless technology and infrastructure design. Carollo identified a 4,000-lf section of the sanitary sewer system as a major problem area with significant deterioration. That section runs through a right-of-way maintained by the San Francisco Water Department. In addition to housing the water departments Hetch Hetchy water transmission mains, the area itself is a potential habitat for several endangered species. According to Project Engineer Jennifer Glynn, the system was very undersized. Glynn said, “Hillsborough’s collection system consists of approximately 82 miles of sanitary sewer pipes ranging in size from 6 to 18 inches. Two L&L studies showed the 50 year old plus system to be capacity deficient. Peak flow was estimated at 8.9 million gallons per day. The existing system was sized to handle approximately 5.5 million gallons.” An open cut replacement method would require approval from a multitude of environmental agencies as well as extensive documentation, both of which would add time and cost to the project. Open cutting would also make the potential for negative environmental impacts to the creek likely. In addition to environmental concerns, the diameters of the existing pipes needed to be increased as much as three nominal sizes in order to raise the system’s capacity to desired levels. Pipe bursting offered an economically feasible and environmentally sound solution.

Because of the large amount of upsizing (15-inch VCP to 28-inch HDPE in most areas) and the extremely deteriorated condition of the existing system, a pilot run of 660 feet (of the 4,000-lf section) was chosen to test the effectiveness of pipe bursting. Glynn said, “We also wanted to start on a small scale because we were working so close to the Hetch Hetchy water mains. We knew the San Francisco Water Department was very concerned and would be monitoring the burst closely.” The project was awarded to D’arcy & Harty Construction, Inc of San Francisco. D’arcy and Harty is one of the most experienced pipe bursting contractors in the San Francisco Bay area. They have successfully completed thousands of feet of pipe bursting in challenging situations including a much-publicized burst at the famed Lawrence Lab on the Berkeley Campus. According to Mike D’arcy, this job presented several challenges. D’arcy said, “We have completed large diameter bursts before, but never an upsize of this magnitude. We also had to contend with tight access, but ultimately we felt confident about the success of the job.” For additional technical support D’arcy enlisted the help of Pipe Bursting Specialist Collins Orton from TT Technologies, Aurora, Illinois. For this job, D’arcy and Orton chose to use an 18-inch diameter Grundocrack Goliath pneumatic pipe bursting tool, a Grundomudd bentonite/lubrication mixing and delivery system and 20-ton constant tension Grundowinch from TT Technologies. Orton said, “We needed a tool that would have enough power to complete the upsize. Also, winch selection was key. The Grundowinch provides constant tension at variable speed. That means the winch is able to make adjustments for conditions that affect line speed during operation, providing constant, consistent and smooth pulling force which is essential for successful pipe bursting.”

The D’arcy & Harty crew used a McElroy butt fusion machine to fuse the HDPE to the 18-inch diameter Grundocrack Goliath with a 34.5 – inch expander.

Before any bursting could begin, the D’arcy & Harty crew searched for existing utilities. According to Glynn, the crew was required to pothole entire sections of the run where the sewer line and Hetch Hetchy water line were closer than five feet apart.Glynn said, “This was done to eliminate the potential for lateral earth pressures or detrimental vibratory earth movements generated by the pipe bursting tool. Based on previous studies, we did not anticipate any problems with lateral vibrations from the tool, at distances greater then 2.5 feet. But, seeing the potential for objections, we decided to add in a safety factor of 2.0 to the previous study’s findings and require D’arcy & Harty to pothole those locations.”The 660-foot run was divided into two sections. The first section was approximately 440 feet long and ran upstream. A gravity fed system bypass was installed using 14-inch HDPE. A 6-inch pump was used to assist the bypass during peak flow times. Three existing 48-inch brick and mortar manholes along the run were in poor condition and were surcharging regularly. The manholes were removed before bursting and eventually replaced with new 60-inch concrete manholes. The Goliath pipe bursting tool was fitted with a 34.5-inch OD rear expander. The D’arcy & Harty crew used a McElroy fusion machine to butt-fuse the necessary length of 28-inch SDR 17 HDPE. The 20- ton Grundowinch was positioned upstream, 440 feet away. The crew launched the tool and bursting was underway. About 5 feet into the run, bursting was halted.

A representative of the San Francisco Water Department, sent to observe the job, stopped the bursting almost immediately due to very noticeable surface heaving and vibrations. Glynn said, “The existing line was very shallow, with only a few feet deep of cover over the top of the pipe. We knew there would be surface heaving and vibration, but we also estimated that lateral vibration would be minimal. From the studies we looked at, we knew that damaging vibrations, those above 5 inches per second, would not travel more than 2.5 feet from the bursting head. Now we would have to prove that.” The SFWD representative requested that a third party take seismic measurements. Glynn located a private consultant and had them on site within 45 minutes. Glynn said, “Four separate micro-seismographs were set up, on the surface, along the top of the 79-inch water main, in areas that appeared closest to the sewer line. While it is hard to know exactly how far away the micro-seismographs were located from the sewer line, it is probable that they were as close as 5 to 8 feet. Results showed that vibrational levels directly over the water mains did not exceed 0.85 inches per second.”Orton said, “We averaged between 0.42 and 0.48 inches per second which is similar to other large upsize seismographic job measurements.” The SFWD allowed bursting to continue.

Despite the shallow host pipe, surface heaving was minimal throughout the first 440-foot run. Additional seismographic readings were taken during the first burst. Even though the tool came within 8 feet of the 79-inch water main, vibrations did not register higher than 0.3 inches per second. The second burst ran downstream approximately 220 feet. The D’arcy & Harty crew used the same launch pit for this burst as they did for the first, launching the tool in the opposite direction. The burst proceeded without problems until the tool reached a 10-foot PVC point repair approximately 100 feet into the run. The tool jumped out of the pipe and surfaced. D’arcy said, “We knew about the repair going into the burst. When we dug up the tool, we found that an insufficient amount of backfill was used around the point repair. There wasn’t enough friction to keep the tool on track. It followed the easy path and that was straight up.”Orton said, “There was hardly any backfill over the existing pipe at that section. There was maybe a foot of cover at best. If additional backfill had been placed on the point repair, we wouldn’t have had any trouble. After the D’arcy & Harty crew dug the Grundocrack up, they lifted everything, re-graded the trench bed, replaced the pipe and continued bursting without further problems.”

Evaluation Overall, pipe bursting was well received by all parties involved. Orton said, “We were able to accomplish a large upsize in an environmentally sensitive area. I think everyone was pleased.”Glynn said, “While each job is different and should be evaluated individually, in the right circumstances, large diameter pipe bursting can be an effective rehabilitation tool that can dramatically increase the capacity of an existing system without the disturbance and cost of traditional excavation and open trench pipe replacement.”Upsizing for the remainder of the sewer line will go out for bid next spring. Up to 4,000 lf of the 15,000-lf system will include pipe bursting as the primary replacement method. Jim Schill Technical Writer Mankato, MN.