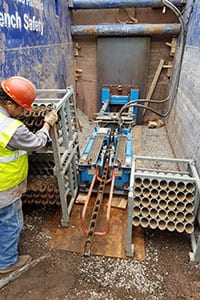 The City of Duluth, Minnesota, is facing a problem familiar to many municipalities around the country, an aging and slowly failing infrastructure.  The issue has made itself known in the city’s water services area through multiple water main breaks every year.

The city, with a population of 86,000 people, provides drinking water to its residents through a system comprised of roughly 430 miles of water main.  The system is made up of a wide range of pipe materials including cast iron, ductile iron, steel, HDPE, and PVC.  Some pipes within the system date back to the late 1800s, but according to Engineering Technician Scott Hegg, many of the mains the city is replacing were installed in the early 1950s.

He said, “Post WWII era pipe is the biggest problem for us.  Much of it is late 1940s to 1950s cast iron pipe and we have a big cathodic problem here. Galvanic corrosion is a problem that results in the failure of many water mains.  The corrosion often occurs in systems where cast iron pipes are combined with copper services in certain ground conditions and climates.  Duluth fits that description.  We suffer from corrosive soils and lack of cathodic protection. We have plenty of main breaks during the year.”

With an aging water infrastructure and the amount of repairs that need to made, the city began looking at less expensive ways of updating its water system.  Hegg said, “We decided to look at doing the projects in-house. With limited budgets, we’re trying to do more with what we have.  We can’t put pipe in the ground fast enough.

We talked to different people and did some research on pipe bursting.  The cost of pipe bursting is almost half the price of open cut.  TT Technologies came up in several instances so we decided to give them a call.”

Pipe Bursting Specialist Mike Schwager, TT Technologies, Aurora, Il, has been working with the city of Duluth as they have built a very effective program over the last several years.  He said, “The city started with static pipe bursting and has never looked back.  They realized that the crews doing open cut and repair work on the broken water mains could do the bursting and that is where we are today. We outfitted them with a Grundoburst 800G static pipe bursting system, which is well suited for the pipe diameters and working conditions that are found in Duluth.”

The Engineering Division for the City of Duluth is part of the Public Works and Utilities Department. The division is responsible for overseeing design and construction of public projects located in and affecting the public right-of-way, including surface transportation, bridges, driveway and alley access, traffic signals, parking, and utility infrastructure. The task of assembling a pipe bursting team and executing it effectively also fell under the care of the engineering division.

Hegg said, “Our city utility crews perform all the bursting work from start to finish on the projects from the installation of the temporary water service, which is usually comprised of a 2-inch overland PE line.  Right down to all the prep, pit digging, machine setting, everything.  Then when the burst is complete crews will test and chlorinate the new line and put it back in service and finish restoration.”

The City of Duluth has a very extensive and detailed ArcGIS mapping system for all of the city’s utilities.  The system’s recorded information even includes every water main breaks. Hegg said that in order to determine a priority for bursting, the last ten years of records are reviewed and the segments of the system that have the largest number of water main breaks get the priority.

Hegg said, “About ten years ago, we started using anode bags on all our repairs, which has helped to reduce the number breaks significantly, but now, we’re trying to catch up with main replacement.” 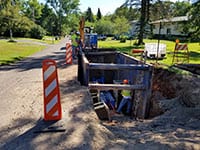 The city choose trenchless pipe bursting to limit disruption on its narrow streets and neighborhoods.

Duluth has a short working season for water main work due to frost and weather, so it is difficult to predict when work can start each year.  Hegg said, “It all depends on when the frost gets out of the ground.  That often that means May or June, depending on the harshness of the winter, before crews can really get moving.  We wrap up construction by late August as first frosts often occur in early September. We got just under 2,000 feet this year, as we had crews tied up on another major main relocation project.

Schwager said, “For 2017 and 2018 a majority of the mains were in Eastern Duluth’s ‘Lakeside’ neighborhood.  This is the older part of town that overlooks Lake Superior. The area is all hillside, with water system piping that is 70-years-old and prone to main bursts every winter and spring.  The hillside adds to the problem, as houses get flooded when an uphill main breaks and the water runs rapidly downhill.

“The cross streets had limited access and two of them were dead end streets high on the hillside. This was a difficult neighborhood to work in with heavy digging equipment, plus the need to maintain access to emergency services. The city crews do a great job of constructing a new water main system under these types of conditions.”

According to Hegg, the average pipe depth for most of the water work is 6 to 8 feet.  Crews try to keep burst lengths around the 500-foot mark.  This keeps the amount of staged product pipe reasonable in the residential settings.  Crews are bursting 6-inch cast iron and in most scenarios, upsizing to 8-inch HDPE.

Before any bursting is done, crews excavate any valves.  Hegg said, “There are going to be repair clamps and we’ve been successful bursting through those, but we remove the valves.  We also remove and ductile iron repairs that are longer than five feet.  But if we know there’s going to be a small section of ductile, we just add a third cutting wheel to the bursting configuration to account for that.”

Bursting crews try to organize bursting projects so that a centralized pit can be utilized to burst in both directions.  Once one bursting run is complete crews will rotate the hydraulic bursting unit 180 degrees and burst in the other direction.

With most of the services being copper, crews typically just reconnect to the new HDPE main.  Hegg said occasionally they would come across an old lead service on the homeowner’s side of the curb stop.  The city will work with the homeowner on a case-by-case basis to replace those old service lines. 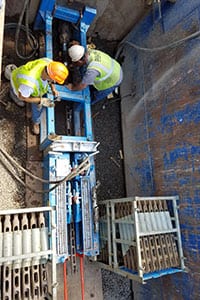 The city has completed its pipe bursting for this year, and crews had a productive summer.  Hegg said the program has been a success so far, but he wants to increase production in the coming years.  He said, “Right now we range between 1,800 and 3,000 feet per year.  Over the past two years the pipe bursting program has completed somewhere around 5,000 to 6,000 feet of 6- and 8-in water main.  We hope to get up to the point where we’re bursting a mile of pipe every year.

“Next year we’re talking about bursting 6-inch cast iron main and replacing with 12-inch DIPS HDPE. We are doing this to increase capacity.

The residents have a very favorable opinion of pipe bursting.  Hegg said, “Just the fact that we have less of the road torn up lets them go through their everyday life a little easier.  They’re able to get in and out of the neighborhoods while we’re working on the project.  There have been a few residents that have welcomed the work with open arms.  Everyone is just surprised at the speed.  It’s faster, it’s cleaner, and its less excavation, less restoration.”

Hegg continued, “One of the advantages of working as an in-house entity is the direct line of communication we have with the residents, our customers.  It’s good to have the opportunity to build the relationships between the city crews and the general public and show them that we’re out there and we’re looking after them.”

Schwager said, “One of the houses on a dead end street had been flooded three times.  When crews put a pull pit in front of his lot, the owner was so happy to see that they were going to replace the main that he ran downtown to get their lunch that day.  It was not uncommon to have an audience on the days that they were bursting pipe in that neighborhood.”

The City of Duluth team is looking forward to continuing this good, productive work for many years to come.