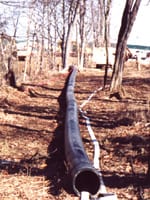 The 275 feet of 16-inch DIPS HDPE was used to replace the existing 10-inch ACP sanitary sewer through pipe bursting.

Urban development and expansion places high demands on existing infrastructure. As large metropolitan areas continue to grow, so do the strains of keeping up with that growth and the challenges of providing adequate utility resources to maintain it. At the same time, public and private demand for safer, more efficient and less disruptive means of construction has changed the way rehabilitation and replacement projects are done and spurred the advent of trenchless technology. Established utility contractors, like Alex E. Paris Contracting, Atlasburg, PA, are now looking at trenchless installation methods and techniques like pipe bursting to ensure their future in the utility construction industry. A recent pipe bursting project for the Peters Township Sanitary Sewer Authority in Peters Township, PA is a prime example of an urban growth utility project and a contractor expanding its construction method repertoire. For the company’s first pipe burst, Alex E. Paris Contracting Project Supervisor Shawn Delaney turned to pipe bursting specialist Mark Maxwell, TT Technologies, Aurora, IL, for technical support.

Peters Township (population 17,300) recently needed to address sanitary sewer problems caused by an expanding urban core. Located just 15 miles south of Pittsburgh, PA, the township has seen substantial commercial and residential building development over the last few years. According to promotional literature supplied by the Peters Township Chamber of Commerce, “The twenty square mile township is quickly changing from a rural farm community to a suburban, upper-middle class neighborhood.” That transition is taxing the existing infrastructure. A new retail mall and the addition of an office building complex strained a section of existing 10-inch ACP sanitary sewer to the point where manholes began surcharging. After an evaluation of the system by the Peters Township Sanitary Authority, a 275-linear ft. section (35 feet deep) was identified as the problem area and designated for replacement with 16-inch ID High Density Polyethylene pipe (HDPE). Because a large portion of the project would take place under a state highway, the project was put out for bid as pipe bursting only. Delaney said, “Part of the job took place under a major intersection were the state highway branches from two lanes to four. That’s why a trenchless application was specified. The disruption from an open cut project would have been unimaginable and the cost of open cutting the road that deep would have been tremendous. This was a challenging project, and that’s the kind we like.”

The 14-inch diameter pneumatic Grundocrack Koloss pipe bursting tool was equipped with a 21-inch rear expander to create the space needed for the new, larger HDPE. Pipe bursting is the only trenchless replacement method that allows for the upsizing of the existing pipe.

Alex E. Paris Contracting has been in the utility construction business since 1928. Over that time, the utility construction industry has changed dramatically. Ironically, it is possible that the company today could be replacing pipes it installed years ago. The method, tools and pipe materials used to complete the replacement, however, would be very different. According to Delaney, the company is keeping on top of the changing market. He said, “We’ve been in business for about 75 years doing open cut methods. Now we’re seeing more and more plans coming out as trenchless. We want to be able to get that work. We’ve been researching all the trenchless methods.” In addition to pipe bursting, the company, which employs over 100 field workers, has already started offering other trenchless installation methods. According to Delaney, the company has used piercing tools for years and has completed several thousand feet of sliplining. They have also done a large amount of auger boring. Pneumatic pipe bursting is a good fit for their business.

Pipe bursting was developed in Europe from the concepts found in pneumatic piercing tools that have been widely used since the 1960s. Maxwell explained, “In the late 1970s German and British contractors tried using piercing tools to break cast iron pipe and pull in new pipe. In Europe at that time, there was a great need for trenchless pipe replacement, specifically for cast iron pipe in the gas industry. The results of those early experiments eventually evolved into pipe bursting as we know it today.” While hydraulic and static pipe bursting equipment is common, a majority of pipe bursting done in the United States is done with pneumatic tools. During pneumatic pipe bursting, the pipe bursting tool is guided through a fracturable host pipe by a constant tension winch. As the tool travels through the pipe, its percussive action effectively breaks apart the old pipe and displaces the fragments into the surrounding soil. Depending on the specific situation, the tool is equipped with an expander that displaces the host pipe fragments and makes room for the new pipe. As the tool makes its way through the host pipe, it simultaneously pulls in the new pipe, usually HDPE. With the use of expanders, one tool can be used to burst several different size host pipes and replace them with new HDPE of the same size or larger. Pipe bursting is the only trenchless method of rehabilitation and replacement that allows for the upsizing of the existing pipe.

A substantial winch boom was needed to accommodate a working depth of 35 feet at the exit pit. The Paris crew used a 20-ton capacity, constant tension Grundowinch.

The pipe bursting project in Peters Township was very challenging, especially for a first burst project. The biggest factor was depth. The existing line was located 35 feet below the surface. At this depth, proper shoring and dewatering are essential. Delaney said, “We’ve worked that deep and deeper before. For this job both of our pits needed constant pumping. We were able to handle the water from the pits with 3-inch pumps.” With 7 feet of the manhole already exposed, the crew dug a 6-foot-wide by 15-foot-long launch pit. Because of the landscape and job site layout, the existing pipe was accessible at a depth of 15 feet at the beginning of the run. The exit pit on the other hand was 35 feet deep and carefully shored. Another reason pipe bursting is difficult at such depths is pipe drag. According to Maxwell, displacing soil can be difficult. He said, “Depending on the actual type of soil, a cubic foot of soil can weigh up to 120 pounds. At a depth of 35 feet, you can imagine the amount of weight on top of the tool and new pipe during operations. This situation is amplified when a large upsize is being attempted. The Paris Contracting crew was replacing 10-inch pipe with 16-inch Ductile Iron Pipe Size (DIPS) pipe. That’s a sizable increase. But when you take into account that the pipe bursting tool was equipped with a 21-inch rear expander to create the annular space needed to accommodate the new pipe, you’re actually going from 10 inches to 21 inches at an extreme depth. That’s impressive.”

The Paris Contracting crew used a 14-inch Grundocrack Koloss from TT Technologies fitted with a guide head (schnozz) and cutting blades, as well as a 21-inch rear expander. A 20-ton capacity constant tension Grundowinch was also used during the pipe bursting. According to Maxwell, the winch is essential to the bursting process. He said, “The Grundowinch provides constant tension at variable speeds. This is especially important when the bursting tool reaches difficult areas like clamps, joints or point repairs. After a section like that is burst, there is less resistance and the tool speeds up quickly. The Grundowinch compensates for this change in speed and prevents slack from developing in the line.” The Paris crew used two pumps and 4-inch discharge hoses to complete a 1,000-ft bypass of the sewer system. After fusing the 275 feet of 16-inch HDPE and connecting it to the tool, bursting operations were ready to begin.

Despite the depth of the existing pipe, bursting went very well. At the height of production, bursting time averaged 30 inches per minute. The job progressed smoothly until operations suddenly halted with 40 feet left in the run. The crew unexpectedly encountered a major concrete encasement. Delaney said, “When the job was designed, plans from the early ’90s were used. Those drawings did not show any encasement. It was not until the designers went back and looked at drawings from the ’70s that the encasement was discovered. Apparently there was, at some point, a rail bed in that area. The best we could figure the encasement was part of the old rail system. We made an attempt to burst through the encasement, but it was reinforced with rebar and formed and poured on the top, on the sides and on the bottom. So we ended up open cutting that section.” After open cutting the last 40 feet, the Paris crew tied in one lateral connection and restored the site.

Delaney sees a bright future for bursting. Delaney said, “We learned a lot [about pipe bursting] from this project. We really want to pursue this method and plan on adding it to our list of services. Challenging work is what we like to do.”